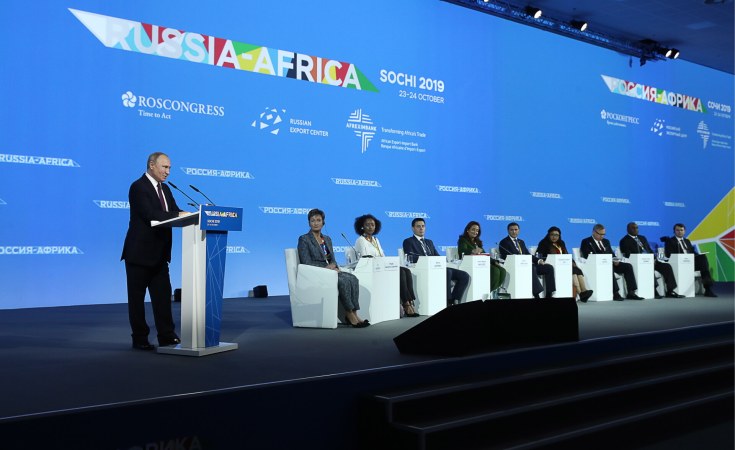 Africa's one-time big political patron now wants to solicit its business. At the first Russia-Africa Economic Forum, the scope of opportunity being advanced is grand and the geopolitical stakes are high.

Most of Africa's political and business leaders are gathered in the Black Sea resort of Sochi for the two-day Kremlin engineered event that Russian political analysts say has been years in the making.

The two sides are set to talk about cooperation in almost every possible sphere, including agriculture and energy, oil, gas and steel production, mining, education, investment and science.

A string of deals are likely to be put forward, fine-tuned, agreed or inked on the sidelines in Sochi: nuclear power plants, technology and tourism agreements, industrial zones, defence and security equipment to name a few.

Russia elegantly touts its track record in Africa in the summit documentation. The federation can help to build Africa, make it prosperous, safe and smart, according to the programme for Sochi.

"Russia just wants to find its niche and its direction with partnerships in Africa," says Olga Kulkova, a researcher at the Institute for African Studies at the Russian Academy of Sciences told DW.

The tone for the October 23-24 gathering was set days ago, when Russian President Vladimir Putin took a swipe at Africa's former colonial masters. "We see how an array of Western countries are resorting to pressure, intimidation and blackmail of sovereign African governments," Putin told Russian media.

As the summit opened Ethiopia was named the latest beneficiary of Russia's debt-for-development program in Africa. Scrapping the debt in excess of $160 million will have to mean privileges for Russia companies wanting to do business in the country that is undergoing major reforms though.

Putin is co-chair of the summit with his Egyptian counterpart Abdel-Fattah el-Sissi his counterpart from Egypt, one of many African countries with ties to Russia that date back decades.

It is not untrue that Russia's Soviet-era track record in Africa generally plays in its favor on the world stage. Political analysts in Africa say that despite the passage of several decades, big and mutually beneficial deals with the Kremlin are welcome.

"Without the firm stand of the Soviet Union during the Cold War and the heyday of the anti-colonial struggle, many of our countries would never have seen the light of independence," Obadiah Mailafia, a former deputy governor of Nigeria's central bank, told DW.

"Russia went into difficulties in 1989 when the Soviet Union disintegrated. Now that Russia is in a fairly strong position, Africa can benefit from mutually beneficial investments and trade cooperation."

The go-to country for nuclear energy

The Nigerian economist Mailafia sees huge room for cooperation between Nigeria and Russia in the oil, gas and steel production. "For us, trading with Russia and opening up to Russia in trade and economic cooperation is a win-win," he says.

Nigeria alone can uses some Russian help and know-how to resuscitate the Ajaokuta Steel Mill. The massive project in Kogi State, the largest of its kind in the country, was started in 1979 but mismanagement and neglect has ultimately left it comatose.

Russia has carved a niche for itself in selling nuclear technology to developing nations. Zambia, Rwanda, Ethiopia, Egypt and Nigeria are among those in Africa in the market for Russian-build nuclear power plants.

South Africa was forced to withdraw its promise to Moscow on that front over the exorbitant costs involved and reports of corruption. But Russia's only BRICS partner in Africa is reportedly keeping the option open however.

On the eve of the forum Rwanda's cabinet approved the deal with Russia's state nuclear energy corporation Rosatom for the construction of a plant by 2024. After talks that involve deals with Russia, Russian diplomats generally express appreciation for Moscow's approach to the country and to Africa.

"Rwanda perceives Russia to be dealing with Rwanda on an equal basis and therefore it does not interfere in its internal affairs," says Christopher Kayumba, political analyst at the University of Rwanda.

"Of course interfering in the affairs of African countries is one of the main criticisms of Western powers on the continent. So Russia, and China in that sense, are perceived to be equal partners.

What about big player China?

Russia's economic ambitions in Africa comes as China dominates the business of infrastructure development on the continent. Africa is open to both, and Russian experts say Moscow does not really see China as a competitor in Africa.

"For us, trading with Russia and opening up to Russia in trade and economic cooperation is a win-win," says Mailafia, the Nigerian economist. "We have a lot to learn from each other. It's not about playing one against the other. After all, China and Russia are also partners in cooperation. So I would say 'Let a thousand flowers bloom'."

"Russia is not opposing any other actor on the African continent. Russia and China could probably cooperate in Africa."

The summit is not solely about economic interests and dialogue or developing trade and investment links with Africa, according to Kulkova. "Russia's interests are not confined only to the economy, although it plays an important role. The political dialogue will also be strengthened thanks to the summit."

It's not just about business

Russia's economic pivot to Africa comes as it explores new markets for its goods and services on the rapidly growing continent and for its know-how. Large and medium sized Russian companies have for years been operating in places such as Angola, Mozambique and Central African Republic. Some are keen to expand.

As the Kremlin maps its plans to expand its economic influence in Africa, some Russian experts not that its overall strategy on Africa is still a work in progress. A document entitled Russia-Africa Vision 2030 is expected to be presented in Sochi. "It could probably become the blueprint for a future Africa strategy of political, economic, humanitarian and social spheres, says Kulkova. In the meantime, Russia is allowing itself to be guided by the "demands and ideas of its African partners."

Why Ghana, Russia Must Rekindle Ties

Buhari, Putin Agree to Fast-Track Nigeria-Russia Ties
Tagged:
Copyright © 2019 Deutsche Welle. All rights reserved. Distributed by AllAfrica Global Media (allAfrica.com). To contact the copyright holder directly for corrections — or for permission to republish or make other authorized use of this material, click here.