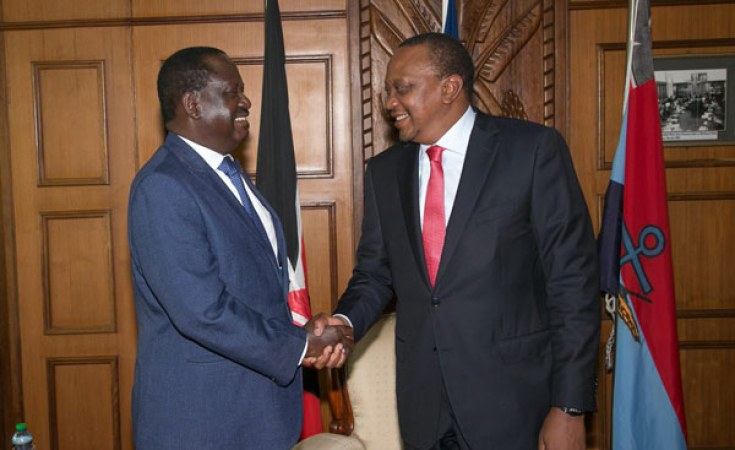 Daily Nation
Opposition leader Raila Odinga and President Uhuru Kenyatta when they met at Harambee House in Nairobi on March 9, 2018.
The Nation (Nairobi)
By Collins Omulo

The Building Bridges Initiative (BBI) team has made proposals that could change the political terrain and address the problems facing the country, the Nation has learnt.

The team, which announced its report was ready yesterday and was awaiting handing over to the President when he returns from Russia, has proposed changes in law, either through Acts of Parliament or total constitutional review to address issues raised by Kenyans.

A member of the task force who sought anonymity as he is not allowed to disclose the report's contents before it is handed over to President Kenyatta and opposition chief Raila Odinga, said some specific measures had been proposed to address various issues from across the country.

"Some of the resolutions are short-term while others are long-term. Some could be immediately addressed. It is only the issue of inclusivity from the nine-point mandate of the task-force that could require a referendum. Only one clause of the report could propose a referendum," the source said.

The source said the report has specific 'remedies' for issues raised in various counties that could make it widely supported by people from across the political divide as President Kenyatta seeks to cement his legacy and leave a united, stable country once his term ends in 2022.

Although the task force term ended Wednesday, the BBI secretariat which had been allocated Sh10 billion is to continue with its work awaiting implementation of the report. BBI which falls under the Office of the President has offices at Kenyatta International Convention Centre and in Runda.

The widely anticipated report is also likely to shape President Kenyatta's succession especially if it proposes the expansion of the Cabinet to create the position of Prime Minister.

Political observers believe President Kenyatta was keen on ensuring the BBI report which was born out his handshake with Mr Odinga succeeds to continue enjoying support of most of opposition MPs in Parliament following divisions in Jubilee Party.

Wednesday, a section of lawmakers allied to Deputy President William Ruto warned that they would reject the BBI report if it proposes expansion of the Cabinet.

The task force led by joint secretaries Martin Kimani and Paul Mwangi said the BBI's Advisory Taskforce yesterday held its last formal sitting at the taskforce's secretariat to make a final assessment of the completed report.

"The task force has the privilege to inform Kenyans that this important initiative has been completed. The joint secretaries have officially communicated to the Office of the President that the Building Bridges Initiative report is ready for a handing over to the President. They have received word that the event will be scheduled at the first available opportunity," said the statement.

The statement noted that the report they have completed takes into account the views of Kenyans from all walks of life in all 47 counties, testimonies and petitions from professional bodies, constitutional commissions, civil society organisations, religious leaders and associations, business associations and business leaders, and elected leaders including governors, deputy governors, senators, MPs and MCAs.

"Having heard how urgently Kenyans seek positive and far-reaching change, the task force believes that Kenya can utilise this auspicious moment to build the bonds between us that will become a strong foundation for an inclusive, fair and prosperous nation."

DP Ruto and his allies have accused Mr Odinga of plotting to use the BBI report to redraw the country's political architecture ahead of the next General Election.

Wednesday, some Jubilee MPs allied to Dr Ruto said they do not have a problem with BBI and would back its recommendations if it would advocate for reforms that would better the lives of Kenyans.

However, they said they would reject the BBI report if it would propose for the creation of additional seats for a few individuals arguing that the report should prioritise the interests of the people and not those of politicians.

"We do not have a problem with BBI as it is just a report that would be presented to us. However, if it is about the creation of positions in the government, we would reject it," Belgut MP Nelson Koech said at Sekenani in Narok West, in the company of the Deputy President. The DP steered away from BBI politics only hitting out at critics of Jubilee administration projects.

"There are people who do not understand our vision; their job is to oppose government projects. I urge you to ignore them," said Ruto.

Ruto Reminds Kenyatta of Their Retirement Plan in Birthday Wish