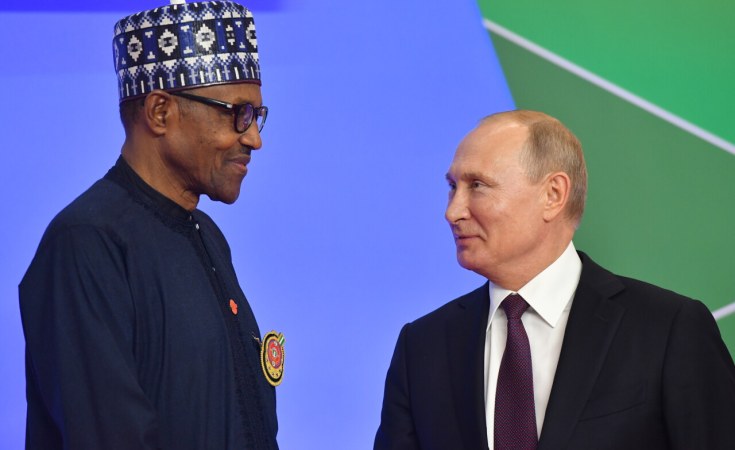 A former governorship aspirant and member of the All Progressives Congress (APC) Campaign Council in Rivers State, Prince Tonye Princewill, has hit back at those who faulted the various diplomatic shuttles by President Muhammadu Buhari, describing such trips and especially the current one to Sochi in Russia as necessary to avert the consequences of the 16 ruinous years of the Peoples Democratic Party PDP.

"The trip was a diplomatic masterpiece. A rebuff to those ignorant of the duties of a President of a country asking him to ignore the invitation. He is the No. 1 Diplomat of his country and no diplomat stays in one place and expects good relationships with other countries.

"With the damage to our reputation from corruption, crime and the self afflicted injuries of PDP's 16 years of misrule, we can't expect the President to stay in one place and think that things will improve. In any case what are the results of Buhari's diplomatic forays? From China we have the Railways, Mambilla Dam and better Airports. From Germany, Siemens power interventions.

"From South Africa better protection for our citizens. From Saudi Arabia and the Middle East we have the Sukuk bond. The list goes on. What are the benefits of such negativity other than further erosion to our name and image? This is something the President is working very hard to correct. I support him. I suggest we all do same", the APC chieftain added.

Princewill, in a statement Thursday in Abuja, also described the takeaways from the Russian trip as "Christmas come early for Nigerians" saying with the volume of expected Russian investment in the country and its attendant creation of hundreds of thousand of jobs, Nigeria is now a preferred investment destination.

"As I scrolled down the 13 areas of agreement reached and compared it with reports from the other 4 countries that were specially invited to Sochi, it became obvious that Egypt that had a whooping 40 per cent of all Russian investment to date were about to share the same space of prominence with Nigeria as it was clear that there was a pivot to our own dear fatherland by Russia.

"Add that to the clear and present preferred destination status for the Chinese investment and you will see that the future is getting brighter. This opportunity is a direct product of a government that has now instilled a new uncommon confidence in international investment.

"I want to congratulate President Buhari and his team for what they have achieved in Russia. Coming a few weeks to this year's Christmas celebrations, permit me to call him Baba Christmas. The fact that the journey to a next level has already begun is now clearly obvious.

"Those who displayed their ignorance of how world trade and politics are played by going on record to say that Buhari need not go to Sochi but should instead stay at home and solve the problems of decades sitting back in the villa, must now be hiding their collective heads in shame. To see and hear all that Mr President has achieved in Russia should impress even his harshest critics - if they have a conscience of course.

"As I scrolled down the 13 different agreements that were reached, I couldn't help but feel a deep sense of pride at the amount of effort and teamwork that must have preceded the visit and the different areas of the country and the economy impacted by them. My single biggest emotion though was relief. Because of the top three priorities we need as a country which are Jobs, Jobs, Jobs.

"I see millions of jobs from this visit alone. But as with so many agreements, meetings, summits and presidential visits, follow up is key. With a new cabinet that has results to deliver and a more collaborative legislature however, I see few challenges to a positive outcome," he added.

Princewill spoke of the numerous agreements including the rehabilitation of the country's refineries, strengthening of Nigeria's defence capability, completion of the Ajaokuta Steel Company and many others.