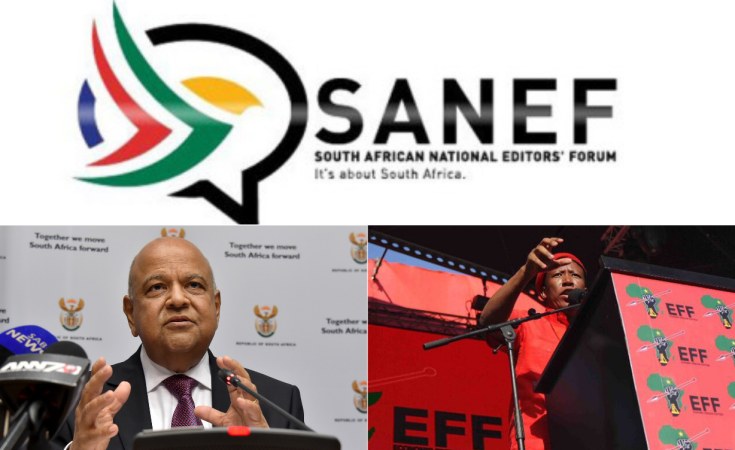 EFF leader Julius Malema's attack on Public Enterprises Minister Pravin Gordhan in November last year, has not infringed on any prohibited grounds enshrined in Section 10 of the Equality Act, the Equality Court heard on Thursday.

"When you look at the text of Malema's statement, can you see a prohibited ground? If you do not, then we submit, with respect, that this is the end of the matter," advocate Tembeka Ngcukaitobi argued on behalf of the EFF leader.

"That does not mean that the statements were not offensive, but the statute is for the protection for groups - not an individual," he added.

Malema and Gordhan faced off in the court, which was sitting in the Gauteng High Court in Johannesburg, after Malema took aim at Gordhan outside the state capture commission of inquiry in Parktown in November last year.

During his attack, Malema referred to Gordhan as a "dog of white monopoly capital" and told EFF supporters to be "ready for war" against Gordhan, News24 previously reported.

Ngcukaitobi argued that while there was a reference to race in Malema's statement - the term "white monopoly capital" was used as a figure of speech.

"This is plainly a reference to the fact that white people in South Africa, as a class, still control the wealth of the economy.

"The criticism is simply that the complainant is an instrument of white capital. This is not an insult to [Mr] Gordhan based on his race at all," Ngcukaitobi submitted.

Ngcukaitobi also argued that the observation that Gordhan belonged to an "Indian cabal" was not attributed to or made by Malema, but was "said to be written by a fellow Indian member of the congress movement, Mac Maharaj".

In his heads of arguments, Ngcukaitobi stated that the "cabal report" referred to the superiority enjoyed by Indian people within the congress movement and which led Africans to be subjected to unfair treatment.

"When I say that Gordhan exhibits an attitude of superiority against Africans, that is a criticism of Gordhan, not Indians.

"The [Equality] Act intends to protect victims of racism, not its perpetrators. Thus, even if the statement unfairly criticised [Mr] Gordhan as being a racist, that does not amount to hate speech against [Mr] Gordhan," Ngcukaitobi explained.

His lawyers, however, contended that even if the court found that this statement was unfair and false to Gordhan, it did not amount to hate speech because it referred to Gordhan personally and not Indians as a group or race.

"No general motivation for his hatred of Africans is made in respect of his race. Furthermore, the allegation that [Mr] Gordhan hates another race group cannot be equated to hate speech in respect to him and his race, where the statement in question makes no such averment," Ngcukaitobi said.

Sanef 'Disappointed' After It Loses Court Bid Against EFF

Rewrite Vague Hate Speech Definition - South African Court
Tagged:
Copyright © 2019 News24Wire. All rights reserved. Distributed by AllAfrica Global Media (allAfrica.com). To contact the copyright holder directly for corrections — or for permission to republish or make other authorized use of this material, click here.