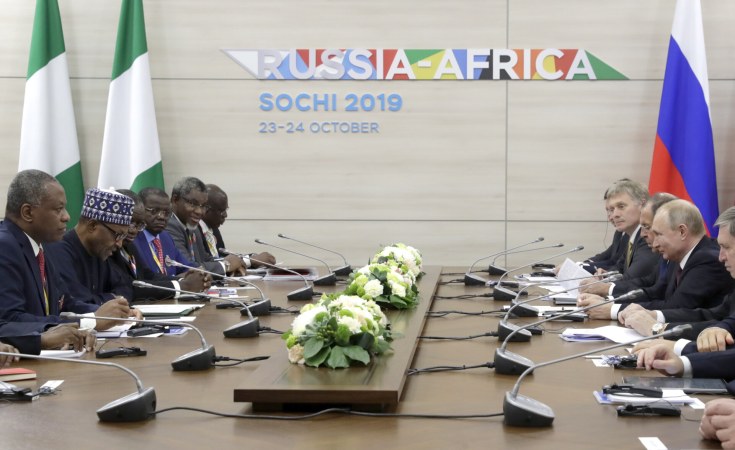 President Buhari who received the country's positive ranking with excitement declared that it was an indication that the strategy adopted in the ease of doing business was working.

The World Bank DBI report, which was released Thursday, also named Nigeria one of the top 10 most improved economies in the world for the second time in three years.

Nigeria according to a statement by the Special Adviser to the President on Media and Publicity, Chief Femi Adesina stated that Nigeria is one of only two African countries to make the highly prestigious list.

He said with this year's leap, Nigeria has improved an aggregate of 39 places in the World Bank Doing Business index since 2016.

The Doing Business Index is an annual ranking that objectively assesses prevailing business climate conditions across 190 countries based on 10 ease of doing business indicators.

The index captures ease of doing business reforms that have been validated by the private sector, and offers comparative insights based on private sector validation in the two largest commercial cities in countries with a population higher than 100 million. The report consequently features Lagos and Kano for Nigeria.

Welcoming the announcement, President Buhari noted that "the movement of 15 places to 131 as well as the recognition being given to Nigeria as one of the top 10 most improved countries, that have implemented the most reforms this year, is significant because we were not even able to achieve some of the key reforms we had pursued, but what we have done so far is being recognised.

"This validation confirms that our strategy is working and we will continue to push even harder to deliver more impactful reforms."

With the impending ratification of the Companies and Allied Matters Bill and the introduction of the Business Facilitation (Omnibus) Bill, 2019 in view, along with other pending and ongoing regulatory, judicial and sub-national reforms, the President declared that "the announcement by the World Bank indicates that our mandate to move into the top 70 doing business destinations by 2023 remains achievable."

The statement further noted that while briefing President Buhari on the rankings, the Minister of Industry, Trade and Investment and Vice Chair of the Presidential Enabling Business Environment Council (PEBEC), Otunba Niyi Adebayo had stated that the ranking was as a result of reforms the administration had introduced.

He said: "The steady improvement in Nigeria's ease of doing business score and rank is a testament to the reforms implemented by this Administration over the past four years in line with the reform agenda being implemented at national and sub-national levels across the country since the establishment of the Presidential Enabling Business Environment Council (PEBEC) by President Muhammadu Buhari in July, 2016.

"The PEBEC works towards the fulfillment of the projections of the Economic Recovery and Growth Plan (ERGP 2017-2020), which is striving to deliver sustainable economic growth in Nigeria by restoring growth, investing in our people, and building a competitive economy as we work towards delivering Mr President's mandate of bringing 100 million people out of poverty.

"The 2020 Doing Business report from the World Bank has reaffirmed the commitment of the newly constituted PEBEC to making Nigeria a progressively easier place to do business and removing the bureaucratic constraints to doing business in the country as we forge ahead in this Next Level."

The Presidential Enabling Business Environment Council, chaired by His Excellency the Vice President, with 13 ministers as members amongst others, has through the Enabling Business Environment Secretariat collaborated with ministries, departments and agencies (MDAs), the National Assembly, the Judiciary, State governments and the private sector to carry out over 140 reforms so far in a bid to remove bureaucratic constraints to doing business in Nigeria and make the country a progressively easier place to start and grow a business.

"The private sector remains the fulcrum of the ease of doing business interventions. We are committed to more engagements among reform-implementing organs of government and the private sector players, and we are happy to see that these have resulted in a more favourable validation of the reforms by the private sector.

"This result will serve as encouragement to sustain the deepening of these reforms and make it even more tangible for businesses and the citizenry. The PEBEC is focused on delivering even more substantive reforms for the improvement of the general business climate."

She noted that over the past four years, Nigeria's score has steadily improved in the World Bank Doing Business Report, after years of decline in both score and ranking in the years preceding 2016.

She also recalled that in 2017, Nigeria moved up by an unprecedented 24 places on the Doing Business rankings, and was for the first time ever, recognized as one of the top 10 reformers in the area of doing business that year.