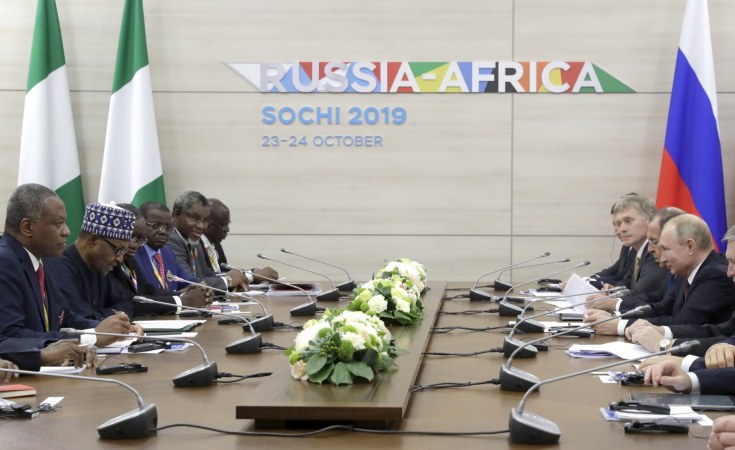 Russian president, Vladimir Putin has said Russia wrote off $20 billion of African countries' debts that had accumulated during Soviet times, according to The Moscow Times report.

The first-ever Russia-Africa summit was held in Russia between Wednesday (October 23) and Thursday (October 24). This, according to report was to restore Russia's partnership with Africa continent since the fall of the Soviet Union. During Nigerian President, Muhammadu Buhari on Monday afternoon departs Abuja with delegates to attend the event along with other African leaders and their delegates.

Prior to the President's departure, the Senior Special Assistant to the President on Media and Publicity, Mallam Garba Shehu in a statement on Sunday (October 22) said that the Summit would focus on exploring and expanding opportunities in security, trade and investment, science and technology, and gas production.

In total, 54 African countries were reported to be represented at the Russia-Africa summit.

Lots of memoranda of understanding (MoUs) were signed between African leaders and the Russian president.

Some of the MoUs signed according to Vanguard reports include;

Support of the construction of 1,400km rail track from Lagos to Calabar

List of military, energy and other deals between Russia and African countries at the summit:

Overall, Russia plans to send $4 billion worth of weapons to African countries in 2019, the state arms exporter said.

Putin said Russia wrote off $20 billion of African countries' debts that had accumulated during Soviet times.

Putin has signalled readiness to help stabilize conflicts in the Central African Republic and Sudan.

Russia's state nuclear company Rosatom is in talks with Ethiopia to build a nuclear power station there.

Petroles du Congo signed an investment cooperation deal on a regional oil product pipeline in the Republic of the Congo.

VEB and the Russian export centre, a state institute supporting non-commodities exports, also signed a memorandum with Morocco's MYA Energy on financing a refinery in the North African country.

Russia's largest lender Sberbank, VEB and the Russian export centre teamed up with London-based investment firm Gemcorp Capital for a $5 billion deal to create a mechanism to support trade between Russia and African countries.

The agreement is expected to help boost Russian exports by providing financial assistance for the supply of Russian goods to African countries including Angola, Ethiopia, Mozambique and Zimbabwe, Sberbank said.

It is expected to offer financial support and counsel to Russian exporters' projects in sectors like agricultural products, fertilizers and medical products, it added.

Putin said Russia's trade turnover with Africa doubled in the past five years to total more than $20 billion.

"I believe we can easily at least double the volume of trade within the next four to five years," he said.

Russia lags far behind its geopolitical competitors on this new frontier. Bloomberg compares its $20 billion trade volume with Africa to the European Union's $334 billion and China's $204 billion and said it equals around one-third of the United States' trade volume.

Russian comments on the impacts of the summit:

"The summit in Sochi is a significant development for Russia's power projection ambitions on the world stage."

"It also acknowledges Russia as a significant power in Africa, at a time when the US is disengaged from the continent, the EU is divided on how to approach it and China is strengthening its hegemony. This summit marks Russia's arrival as a continent-wide player."

"But whether or not it is political theatre/PR or a genuine strategic game-changer lies in the economic deals that are actually crystallized from the summit."

"I think what [it] comes down to is Russia exporting sovereignty. ... In a nutshell, we are going to sell you cheap weapons, do business deals with you, set up partnerships, all under the umbrella of helping you be strong and independent -- and stand up to the West."

"The difference with the Soviet, ideologically driven approach is that Russia is not hiding its primary driver -- self-interest. And is not nearly invested enough to want to impose much. African participants, meanwhile, speak of Russia offering partnerships, not aid."

"Russia's actions look suspicious to the West because it doesn't see what's driving them. But I'm not seeing a hidden cache of motivations here. Sure, Russians talk of doing good. Sure, they want to influence. Who wouldn't? But this is about selling stuff. They're not hiding that."

Extract from President Buhari's speech at the summit:

"We are caught in an inescapable network of mutuality, tied in a single garment of destiny. Whatever affects one directly, affects all indirectly."

"Let me clearly state that the time has come with this historic summit today, for Africa and the Russian Federation to develop new mutually beneficial relations."

"On our part, I want to assure our Russian friends that Africa is resolute and ready. We look forward to embracing the new dawn of Africa-Russia partnership in general, and the revitalized Nigeria-Russia relations in particular." [Read Full Speech HERE]

[Report contribution from: The Moscow Times and Reuters]