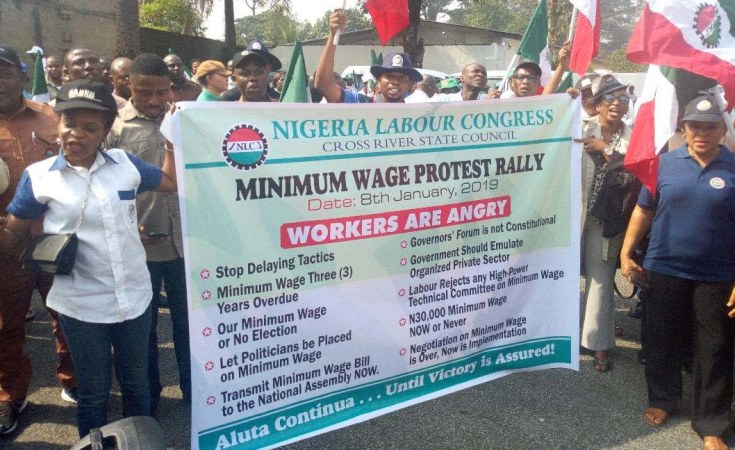 After 186 days of delay from April when President Muhammadu Buhari signed into law the new Minimum Wage Act of N30,000 for Nigerian workers, the Federal Government and Labour finally reached an agreement last week on the most contentious aspect of its implementation, namely relativity and consequential adjustment for workers at various levels.

Minister of State for Labour and Productivity Festus Keyamo announced the agreement, reached after many weeks of intense and suspense-filled negotiations.All the while, labour was threatening a general strike unless government reached a deal with it. After much haggling between Federal Government and Labour over the finer details of the Act, the final agreement reached on Friday last week was a major breakthrough.

The road to the new minimum wage law itself was not easy for both parties as it featured contentious negotiations as well as arm-twisting of government by labour with threats of general strike,in the face of seeming unwillingness by government to cede to the workers' demand.It also remarkable that even after the assent to the Act by President Buhari, it istaking the process six months to be implemented. This is due to the government adopting a disposition which offered little credit to it as a committed stakeholder in the welfare of the country's workers.

The law provides for review of the subsisting minimum wage after every five years. Building on this condition, labour rallieditself to have the government come down to the negotiating table as and when due. But this effort was always met with the reluctance of government to accede to labour's requests. Typical instances of such reluctance by both federal and some state governments were recorded as the issue of paying workers the statutorily approved minimum wage, was turned into a matter to be determined by the personal discretion of respective state governors. Even with the latest agreement, there are still gnawing fears that many states may not comply fully and willingly. This situation has induced labour to warn of its resolveto press home the issue of compliance by states and eligible organisations. This has raised the concern that the last word on the implementation of the newminimum wage across the country may not have been heard.

It was in 2011 that we had the last minimum wage review at which the rate was raised to N18,000 per month. As labour leaders have observed, the new rate of N30,000 is not what we can call a living wage but it is an improvement on the rate of N18,000. It is the hope that governments at all tiers as well as the Organised Private Sector will implement new minimum wage without further delay. We also urge that this new wage should be reviewed without fail after five years, and without waiting for labour to threaten strikes and civil disobedience.