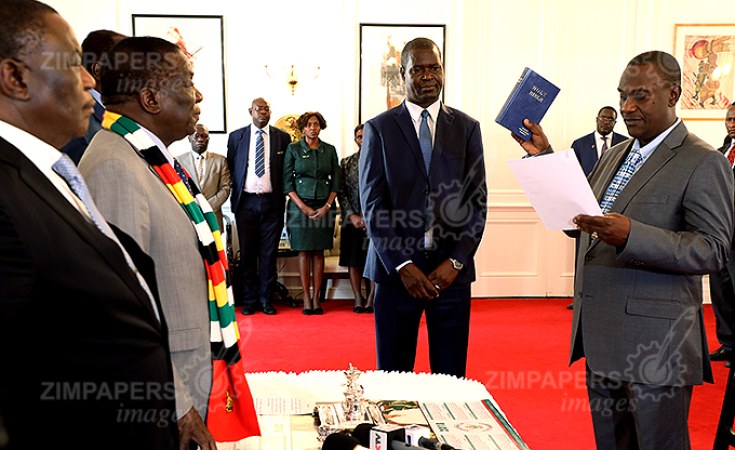 The United States of America is surely thumbing its nose at Zimbabwe, regarding its continued hostile policy towards the Southern African country. The US has imposed a battery of sanctions on Zimbabwe, punishing individuals and placing restrictions on businesses owned or linked to the Government.

The sanctions also prevent American companies from trading with Zimbabwe and providing certain goods and services, without clearance from the State Department.

The Zimbabwe Democracy and Economic Recovery Act (2001) and related policies set out a framework to constrain Zimbabwe's economic activities with the US on a bilateral basis, and in relation to third parties as in the case where an individual or company wants to trade with Zimbabwe, but uses the US dollar as a medium of exchange.

This latter case means that the transaction has to go through the United States' Clearing House -- the Federal Reserve -- and this entity routinely ferrets out such transactions, freezing or confiscating proceeds.

That is according to the operations of the Office of Foreign Assets Control (Ofac) which is housed in the Department of Justice.

We trust these are not new revelations to anyone who has a basic understanding of the policy. Meanwhile, a whole debate has been ongoing regarding the nature, extent and effect of US sanctions on Zimbabwe, which have obtained for the last 19 years -- at least.

And so when last Friday Zimbabwe and Sadc observed the Anti-Sanctions Day which the latter declared last August, there was bound to be renewed debate.

In the run-up to the day, the US Embassy in Harare was engaged in a flurry of activity on social and conventional media trying to set a counter-narrative regarding its sanctions.

It sought to divert the discourse from the position where US sanctions were being blamed for causing economic ruin in Zimbabwe.

Instead, US Embassy highlighted cases of corruption, many of them publicised, which it entirely blamed for the ills that Zimbabwe is facing.

There yet may be cause one day to do a proper analysis on the complex relationships between sanctions, the economy, corruption and other factors that have had an intercourse in shaping Zimbabwe two decades into the new millennium.

However, last week was never actually about looking objectively at these things.

The US Embassy in Harare -- with the help of some social media mercenaries whose identity is by now known -- sought to win a propaganda war that would deflate the message of the region, which carried reverberations of the old regional solidarity against imperialism.

And the flurry of activity was obviously over the top.

It is strange how the embassy and the ambassador, Mr Brian Nichols, have sunk to such dangerous levels of conceit.

The State Department -- the US' foreign ministry equivalent -- is informed by such petty and low kinds of diplomacy.

There is reason enough to believe, as is the thinking in some circles -- that there is a disjuncture between what the State Department and the White House think in terms of foreign policy.

The Zimbabwean scenario could be emblematic.

The nobler goals of re-engagement are wasting away, with real and continuing danger that the wedge between Zimbabwe and the US is becoming wider by the day.

Thanks in a large part to some political crusaders at the State Department and the Embassy in Harare, in particular.

Just as well, we saw the US imposing sanctions on Zimbabwe's State Security Minister, Owen Ncube, on the very day there were protests against sanctions.

There is clearly an indication that where the US is concerned, the re-engagement process has reached a crisis upon which some introspection has to take place with a view to foster a way forward.

Essentially, as noted in the opening, the US is showing us that it does not care. It is willing, as so far as semiotics go, to show us an undiplomatic finger.

What is to be done? This is a question that will require answers soon.

We are especially worried when the Embassy in Harare has just shown that it is not bound by diplomatic niceties and will be willing to wrestle in the mud -- as it showed with those crass and endless tweets last week.

Previous Story
Leadership is the Cause of Crisis, Not Sanctions - U.S. Senator
Next Story

Leadership is the Cause of Crisis, Not Sanctions - U.S. Senator

Is Zimbabwe Govt Using Lockdown to Mask Clampdown On Critics?
Tagged:
Copyright © 2019 The Herald. All rights reserved. Distributed by AllAfrica Global Media (allAfrica.com). To contact the copyright holder directly for corrections — or for permission to republish or make other authorized use of this material, click here.