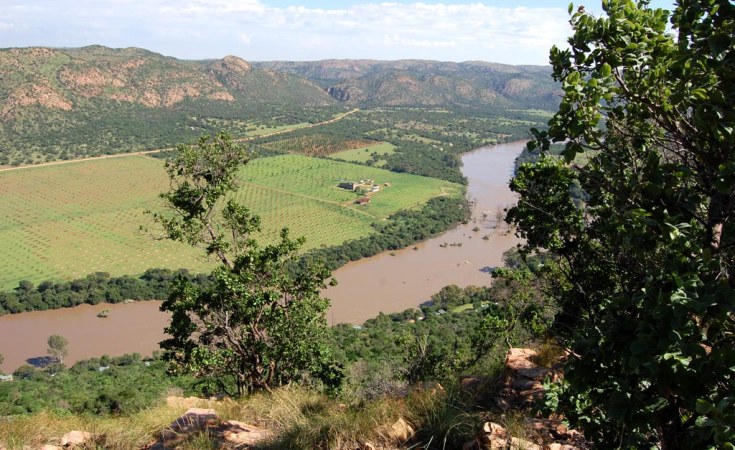 tadpolefarm/Wikimedia Commons
A view of the Vaal River from Aasvoelkop in 2010.
The Conversation Africa (Johannesburg)
analysis By Mike Muller

It has been a hot, dry October in much of the interior of South Africa. And the rains have started later than usual. So it was not surprising that alarm bells went off when it was announced that the Lesotho Highlands Water Project tunnel system, which supplies water to some of South Africa's biggest cities, would be closed for maintenance for two months.

These fears were inflamed by appeals by local authorities in Gauteng province, the country's economic hub, to use water sparingly. Residents had already seen the recent example of Cape Town's water crisis.

Gauteng and the surrounding region gets its water from the 14 interconnected dams of the Integrated Vaal River System. Some of these are in Lesotho, South Africa's mountainous neighbour.

The Lesotho dams provide over 25% of the water supplied by the Integrated Vaal River System. So a permanent loss of supply from Lesotho would indeed cause shortages for millions of South Africans. But this long-planned maintenance merely stores the water in Lesotho's dams for a few months, to be released later. There are far greater risks emerging in the Integrated Vaal River System that need to be addressed.

Despite the current heat wave, there is in fact no danger of an immediate water shortage in the Gauteng cities of Johannesburg and Pretoria. Specialists concluded very recently that no water use restrictions would be required in the Vaal River System this summer. This followed a detailed review of the state of the dams in the system mapped against possible future rainfall patterns and current consumption levels.

But there are issues that residents of Gauteng and surrounding areas should be concerned about. Specifically, are the authorities responsible for managing water supplies keeping their eye on the ball? And are they ensuring that plans to protect the province from shortages over the next six years will be implemented on time?

Concerns have been fuelled by many well-founded reports of mismanagement at the Department of Water and Sanitation, which has oversight responsibility for water security. And the experience of a faltering electricity supply has shown that weak management of critical services like water and electricity can easily trigger supply crises.

So where should concerned water users be looking for problems to emerge?

Falling dam levels are not a problem. Dams are built to store water in wet periods to draw on when it's needed; they rise in the rainy season and fall when it's dry. If that didn't happen, they would not be necessary. What people should be checking is whether the authorities are monitoring the situation.

In the case of the Vaal River System, it's reassuring that the Department of Water and Sanitation technicians did hold their annual operating review to decide whether restrictions were needed. This procedure is what kept the region water secure during the 2015/2016 drought.

The more important question is whether the Integrated Vaal River System supply infrastructure is adequate.

The Department of Water and Sanitation has plans for interventions to ensure adequate supplies for all major systems, including the Vaal River System, until 2040 and beyond. But plans on paper need to be translated into infrastructure and into changed behaviour among water users. In this area, there is good reason for concern.

The plans anticipate that the Vaal River System has to be expanded. It has long been recognised that the most economical source for new water supplies is an additional dam in Lesotho.

Action is now urgent. By 2012, the decision to build the Polihali Dam had been taken by the Lesotho and South African governments. But progress has been repeatedly delayed. One delay was reportedly caused by the South African minister attempting to redesign the procurement process.

So, by 2017, when the Lesotho Highlands Development Authority got the go-ahead to start design work, the project was already five years late.

Recent reports from Lesotho suggest that there have been efforts to bypass procurement procedures, despite warnings from the authority that formal tendering processes have to be followed. And, even though preparatory infrastructure construction has already started, South African authorities have not delegated decision-making processes and are taking months to respond on practical project management issues. There are also fears that past mismanagement at the Department of Water and Sanitation may make it harder to raise the loans to fund the main construction work.

Delays at this stage pose a real challenge. If a contractor has to stop work while waiting for a decision on a design change, delay penalties can cost South African water users millions of rands a day. Worse still, any delay extends the period during which the region will be at risk of shortages if there is a drought.

Rand Water, which supplies most of the municipalities in the region, has a licence to take 1,600 cubic metres of water a year from the Vaal River System. The balance of the system's supply goes to Eskom, the power utility as well as industry, mining and agriculture.

The population of Gauteng is growing by 3% annually, as people flock in to look for work. The fastest-growing water use sector is domestic supply by municipalities.

But water availability from the Vaal River System will remain the same until the Polihali dam is completed. This means that, to avoid a water crisis in the event of a drought between now and 2026, water use per person in the region is going to have to reduce by 3% every year.

Over the next six years, all municipalities will have to keep their consumption static, no matter how fast their populations grow. Rand Water has initiated a special "Project 1600" to enforce these limits.

Of course, the feared drought disaster might never happen. If good rains fall every year between now and 2026, citizens might be able to squeeze through without tightening their belts. But nature can hit hard and in unexpected ways. Good water management is all about disaster risk reduction, not disaster management.

There are plans to provide enough water to meet the needs of all of South Africa's major cities until at least 2030. As in the Vaal River System region, what matters is acting on those plans in good time.

Water security requires changing people's behaviour, building new infrastructure and operating it properly. And this will only be achieved if political heads take the lead and avoid further delays.

Govt 'Master Plan' Enough for South African Water Security?
Tagged:
Copyright © 2019 The Conversation Africa. All rights reserved. Distributed by AllAfrica Global Media (allAfrica.com). To contact the copyright holder directly for corrections — or for permission to republish or make other authorized use of this material, click here.