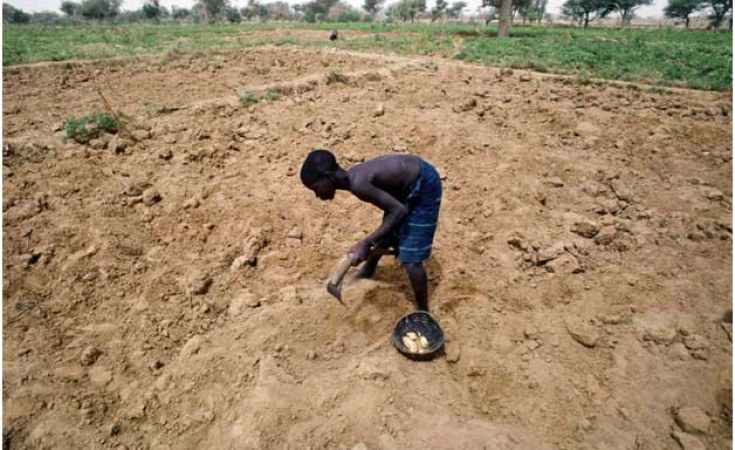 Abu Dhabi, UAE — Nearly 50 million people in west Africa rely on agriculture and livestock for their livelihood but the land available for pastoral use has been rapidly shrinking.

While a part of this is because of growing population, climate change has also been a major contributor to this, says George Stacey, an analyst working with Norvergence*, an environmental advocacy NGO.

According to the United Nations, nearly 80% of the Sahel's farmland has been negatively impacted by temperatures rising - which they are at a rate that is 1.5 times faster than the global average.

"As droughts and floods continue to increase in frequency and duration, food production in most of the Sahel region remains highly insecure," Stacey told IPS.

"And for a region with such a high dependence on agriculture that is also already suffering from food shortage, this has extremely far-reaching consequences."

Many areas in Mauritania, Mali, Niger, Burkina Faso, Senegal, and Chad never fully recovered from the food crisis of 2012, which was a result of a combination of droughts and regional conflicts that shocked food prices, and pushed more than 13 million people in the Sahel to malnutrition levels.

"As herders and farmers in the Sahel migrate internally to cope with degrading land and diminishing livelihoods, the threats of violence and their chances of being recruited in criminal and extremist groups established in the region continues to increase," Dr Joseph Faye, a climate and security impact and adaptation scientist working with several think tanks in western Africa, told IPS.

Poor governance and state authority have resulted in number of jihadi groups and other extremist and criminal networks establishing themselves in many parts of western Africa and food insecurity serves as a recruiting incentive for them.

John Podesta, founder and director of The Center for American Progress, writes in a brief for Brookings Blum Roundtable, that security experts are concerned about the connection between climate change and terrorism and that the "the decline of agricultural and pastoral livelihoods has been linked to the effectiveness of financial recruiting strategies by al-Qaida".

"There are a number of extremist factions that gained foothold in different parts of western Africa and they are thriving due to the dangerous combination of poor state security and easily recruitable civilians," says Faye.

The Islamic State in West Africa (ISWAP), for example, is a splinter faction of Boko Haram that just in September 2019 abducted six aid workers in Nigeria and has already executed one. ISWAP is just one of the several extremist groups currently present in the Sahel.

And many studies carried out in recent years by NGOs, think tanks, and international bodies like the United Nations Development Program (UNDP) have shown that most recruits of these groups are, in fact, far less guided by ideologies than by financial vulnerability.

And as climate conditions continue to worsen and diminish the livelihoods of farmers and herders, it will continue to get easier for different extremists and criminal groups to manipulated and recruited them to serve as foot-soldiers.

The UN special adviser on the Sahel, Ibrahim Thiaw, has stated that the region is already amongst the regions of the world that are facing the most extreme brunt of global warming.

Poor rainfall and droughts over the past decade have resulted in at least 14 million still requiring food assistance, according to a report published in 2018. The Permanent Interstate Committee for Drought Control in the Sahel also predicts a "persistent food insecurity" for the foreseeable future.

"Poor agriculture and food insecurity spikes migration and internal displacement which, in a region that already has a network on violent groups and a history of conflicts, will only make more people more vulnerable to turning to whatever option is available for them to sustain themselves," says Faye.

"Also, conflicts in any localized area almost always spill further which is why threats in any art are highly concerning to the security of the overall region and even beyond that of course."

The risk of extremism and violence in any part of the Sahel is dangerous to the wider region because most countries in western Africa have porous, largely unguarded borders that are frequently crossed illegally by many - from merchants and herders to those trafficking weapons, drugs, and toxic ideologies.

"Insurgencies in one country can and often do spill across borders, as was the case when conflict spread from northern to central Mali and into north and eastern Burkina Faso and southwestern Niger," says Faye. "This is why the destabilizing effects of climate change in any part of it should be of great concern to all those who seek security and stability in the region."

A report by the World Economic Forum emphasizes that while military pressure is "undoubtedly required" to stop extremist groups, the Sahel can only truly counter terrorism and conflicts if foreign aid is used to directly invest in improving the livelihoods of the region's most vulnerable people.

Reports by agencies such as the International Committee of the Red Cross point out that when funds are put to help income-generating, small-scale pastoral projects such as dairy farms and community markets, conflict and violence almost always calms down.

"So long as armed extremist groups continue to be the only reliable means of livelihood around, they will continue to find people to join them," states Stacey. "This is why development organizations and governments must provide targeted help to the pastoral and agricultural communities in the Sahel to continue being able to sustain their work."

The United Nations Office is one of the intergovernmental organizations working on mitigating the conflicts that arise from the loss of agricultural land.

"The United Nations Office for West Africa and the Sahel promotes the peaceful coexistence between both groups and is working with Economic Community of West African States (ECOWAS) to capture good practice from different countries in the region that could benefit the countries most affected by farmer-herder conflicts," Kouider Zerrouk, head of strategic communications and public Information of UNOWAS, told IPS.

ECOWAS is a West African political and economic union of fifteen countries that also serves as a peacekeeping force. Member states have also, at times, sent joint military forces to intervene at times of political instability in bloc member states.

The World Bank has also launched a number of projects, including the Regional Sahel Pastoralism Support Project, and the Pastoralism and Stability in the Sahel and the Horn of Africa but the report by World Economic Forum states that there is a need for more.

"It is equally important that public and private leaders and civil societies recognize and anticipate ways that agriculture and livestock production are likely going to change in relation to climate, and encourage investments in adaptation and new crops in advance to avoid major declines in crop yields," states the report. "The future looks challenging, which makes it all the more important to prepare for it."

Rabiya Jaffery is a freelance journalist covering climate, conflicts, and culture-related stories from the Middle East and South Asia.

The article was supported by Norvergence, an NGO that supports climate-related advocacy work.

Food Insecurity Levels in Sahel 'Spiralling Out of Control' - WFP

Previous Story
Tagged:
Copyright © 2019 Inter Press Service. All rights reserved. Distributed by AllAfrica Global Media (allAfrica.com). To contact the copyright holder directly for corrections — or for permission to republish or make other authorized use of this material, click here.