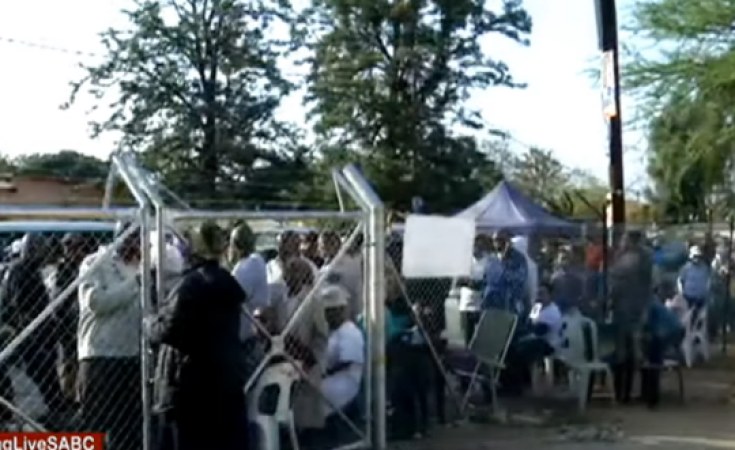 SABC Digital News/YouTube
A queue of people waiting to vote in Botswana on October 23, 2019.
Institute for Security Studies (Tshwane/Pretoria)
analysis By Peter Fabricius

After all the predictions of a close race, Botswana's ruling Botswana Democratic Party (BDP), in power since 1966, swept to another victory - even bigger than the last - in last week's parliamentary elections.

The BDP was declared the winner on Friday, having won 38 seats - one more than in 2014 - for a clear majority of the 57 elected seats. The chief justice formally declared the BDP's new leader, Mokgweetsi Masisi, as national president. The opposition Umbrella for Democratic Change (UDC) coalition, which was widely expected to give the BDP a real run for its money, came a poor second, with just 15 seats.

And the newly formed Botswana Patriotic Front (BPF), backed by former president Ian Khama, won only three seats, with the Alliance for Progressives (AP) taking the last one. Both UDC leader Duma Boko and BPF leader Biggie Butale lost their own constituencies.

And once again the first-past-the-post constituency system saved the BDP from having to form a coalition to achieve a majority as it only won 48.7% of the popular vote (about the same as in 2014), but two thirds of the seats.

The results looked like a resounding rebuke by the Batswana people to Khama's unprecedented challenge against his successor Masisi - and indeed an apparent triumph for the new leader.

The BPF, formed just a few months ago by Khama and other disaffected BDP members, including former deputy minister Butale, won its three seats in just one small area, Serowe. Butale had predicted 15 seats for the BPF. Despite falling a long way short of that, it seemed to help the UDC - with which it was in a loose coalition - by siphoning off enough BDP votes to help the UDC gain a few seats in the central district, which the BDP traditionally dominates. However the BPF may instead have split the opposition vote in some seats, giving victory to the BDP.

In the south, the BDP captured many urban seats in constituencies held by the UDC. In the capital Gaborone and its periphery, where the UDC won six of seven seats in 2014, the BDP won all seven this time.

Keith Jefferis, former Bank of Botswana deputy governor and now CEO of Econsult, says the elections have changed the colour of Botswana's electoral map significantly. In a sense they inverted the political map, which before was mainly BDP-red at the top and mainly UDC-blue at the bottom. Now it's mainly red in the south because of the BDP gains in Gaborone and elsewhere and significantly more UDC blue in the north.

The reasons for this colour inversion are not quite clear. In some seats, as mentioned, the BPF seemed to split the BDP vote and so hand victory to the UDC.

Jefferis said two other local factors seemed to have contributed to the UDC gains in the north. The closing of the big copper-nickel mine and smelter in Selebi-Phikwe, with the loss of thousands of jobs, could have provoked a protest vote against the ruling BDP. And in the Maun area, the country's tourist capital, the opposition might have benefited from local sentiment that the government was allowing foreigners to dominate the tourism business.

The BDP gains in Gaborone and elsewhere in the south appeared to vindicate the views of several analysts - and even some of his fellow leaders - that UDC leader Boko had made a strategic error in forming a loose alliance with the BPF. Some noted that the UDC had called for Khama's arrest on corruption charges when he was in office. Prince Dibeela, deputy leader of Boko's Botswana National Front - the main party in the UDC coalition - had warned that this partnership was a 'blunder' because of Khama's unpopularity in the cities.

Jefferis said this might explain part of the BDP's gains, though not all. Some could be attributed to the AP - which in 2014 had been part of the UDC - splitting the UDC vote in the cities.

The BDP's gains in Gaborone and elsewhere in the south probably also reflected the greater charisma and popular appeal of the more engaging Masisi - who grew up in Gaborone and is well liked there - versus the rather austere Khama and the unpopular Boko, widely considered to be 'flashy and arrogant', as one observer put it. The result also suggested that most Batswana liked Masisi's reversals of several Khama's policies.

In the south, the BDP captured many urban seats in constituencies held by the UDC

These included his lifting of Khama's total ban on the hunting of wildlife - mostly elephants - and Masisi's easing of Khama's restrictions on alcohol consumption. ISS Today found on a recent visit that many Batswana regarded Khama's hunting ban as exhibiting a rather callous preference for animals over people, some whom get killed by wild animals every year. Many found Khama's restrictions on bar opening hours and his increased alcohol level an intrusion into their private lives.

The BDP's big gains in the traditional opposition heartland of the south in particular have aroused suspicions in the UDC/BPF camp of rigging by the ruling party. One official told ISS Today that they would challenge the results in court, though by the weekend they hadn't.

It's not clear yet where this leaves Khama. He told ISS Today last month that if his coalition won and unseated Masisi, he would happily retire from politics. But if his side lost, he vowed to continue the fight against Masisi - indicating that it's personal. Will he really continue that struggle, and if so, would it now become quixotic? Would he thereby be denying this week's apparent hint from the electorate that perhaps he should retire from politics?

Much could depend on what happens inside the UDC. Whether Boko's leadership will be challenged because of the party's big defeat. And whether the party will blame it on Boko's partnership with Khama.

But it seems that Masisi is now firmly in the saddle. He has a clear mandate to implement the many difficult reforms Botswana needs to wean itself of its diamond dependency and lay the foundations for a more diversified economy in the future.

Previous Story
Next Story
Governing Party Wins Tight Election. but Biggest Tests Are Yet to Come

Governing Party Wins Tight Election. but Biggest Tests Are Yet to Come

Opposition Claims Vote Rigging in Botswana Elections
Tagged:
Copyright © 2019 Institute for Security Studies. All rights reserved. Distributed by AllAfrica Global Media (allAfrica.com). To contact the copyright holder directly for corrections — or for permission to republish or make other authorized use of this material, click here.