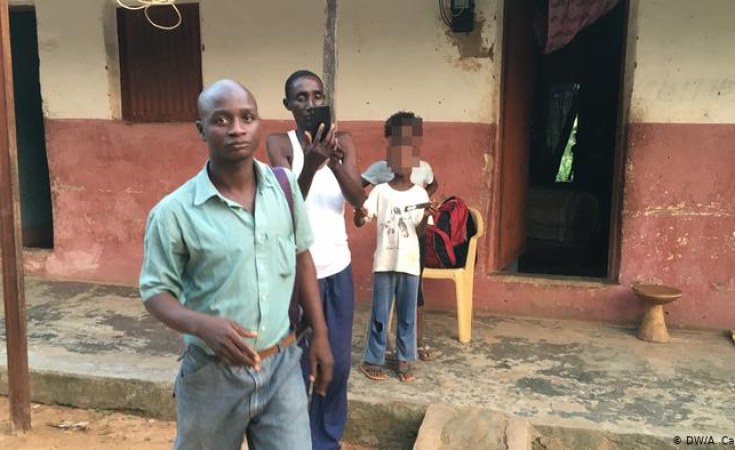 Africans are increasingly using smartphones. Chinese providers in particular benefit from the boom. The African companies that are pushing their way onto the market are having a hard time competing with Chinese prices.

"I can't imagine life without a smartphone," says 35-year-old Lafu Balde. His daily life takes place on the streets of Bissau, the capital of the small Portuguese-speaking western African nation Guinea-Bissau, where he is always on the lookout for the odd job. Sometimes he offers to exchange foreign currency for foreign businessmen; at other times he runs errands for shopkeepers. "I use my smartphone to keep in touch with my customers here in Bissau, but also with my friends and acquaintances all over the world. For me, the smartphone is now almost as important as electricity, water or bread," he told DW.

77 percent of all Africans are under 35. Many now use smartphones. "For example, we use mobile phones for bank transfers. We buy digital credit and send it by SMS to relatives and business partners around the country. They can redeem the money anywhere," says Lafu Balde. Nowadays it is possible to pay utility bills through the smartphone. Many universities offer online enrolment. Often, applications to administration offices and ministries can also be sent digitally.

The smartphone market in Africa is highly competitive, but few devices worldwide are designed with African customers in mind. This was something the Chinese company Transsion recognized early on and enabled it to become market leader on the continent over the last 10 years. According to Transsion Holdings, it has sold more than 130 million Tecno and Itel cells in Africa.

"They are exactly how smartphones need to be," says Lafu Balde. He bought a Transsion phone recently: "It cost only 50,000 CFA francs [€76] and has everything we need here in Africa: access to the most important social media is pre-installed, the device is robust and the battery lasts several days in standby mode. I am grateful to the Chinese for making it so easy for us to access the Internet." Transsion phones also have user menus in several African languages and usually offer space for two SIM cards. That goes down well with the customers.

Chinese cell phones also dominate the market in Senegal and Nigeria, the latter being Africa's most populous country. The same applies to the second largest market in sub-Saharan Africa, Ethiopia. Transsion was the first non-African company to introduce Amharic fonts and after-sales support in Amharic, almost 10 years ago.

A Chinese formula for success

According to information from DW's Chinese department, only a few people in China are aware of the great success of "Transsion" mobile phones in Africa. The company achieved a market capitalization of around $6 billion (€5.4) on the first day it went public, four weeks ago. The company's focus on Africa began in in 2008, when Transsion defined its "Focus on Africa" strategy. It met with resounding success. In 2018, the volume of cells shipped from China to Sub-Saharan Africa reached 124 million. Last year, the company's market share in Africa stood at almost 50 percent.

A new African manufacturer, Mara Phone, is also trying to gain a foothold in the market. According to the Rwandan government, the company is backed by Ashish Thakkar, an investor from Dubai. Rwanda's President Paul Kagame opened the first smartphone factory that produces directly in Africa in the capital, Kigali, at the start of October. A second one was inaugurated ten days later in Durban, South Africa.

Mara Phones are based on the Google operating system Android. Special features include the adaptation of social media presentations to the needs of African users. The company still plans to build around 1.2 million devices annually, which would make it a niche player. But things are about to change.

"High-tech for Africa from Africa is a project that the Rwandan government has actively supported from the outset," says Clare Akamanzi, from the Rwandan state development agency RDB. "We're excited about this project because it makes it easier for our people to access powerful smartphones."

According to Akamanzi currently only 13% of Rwandans own smartphones. "However, we want to push for major development in our country and promote the digital conversion," Akamanzi told DW.

Rwanda is making great strides in terms of digitalization. Two years ago, the public administration put an Internet platform called Irembo (gate) online, through which all citizens can digitally access public services, including via smartphones. "We have placed all kinds of applications online, for example for ID cards. It is therefore very important for us that citizens have smartphones so that they can use our online service more easily," says Akamanzi.

The challenge of recharging

Interest in smartphones "made in Africa" is also growing in other countries. "I've heard about the new African cell phones from Kigali and I'm really curious when they will arrive here in Bissau. It makes me proud to know that there is a cell phone that is produced entirely in Africa," says Lafu Balde. He adds that he would like to buy an African mobile phone provided the price/performance ratio is as good as that of the Chinese. But as far as he knows, the best priced Mara device costs €130. "Clearly too much," Balde says.

The young Guinean says that above all he needs more powerful batteries, because power supply is a huge problem, especially in rural areas. "My relatives in the interior of the country often have to walk several kilometers to get to the nearest power supply," Balde told DW.

Small home solar energy systems that are a practical solution for charging mobile phones in remote areas without electricity do exist. The Kenyan company M-Kopa sells minisolar systems primarily in Kenya, Tanzania and Uganda. They are supplied with the appropriate accessories such as buffer batteries, charging cables for all types of mobile phone connections, battery powered radios and cost-effective LED lamps. That looks like a good business model to Lafu Balde: "In remote areas of Guinea-Bissau, some people have set up their own minisolar system and make a living recharging cell phones and smartphones."

Jun Yan contributed to this article