Rwanda: Electric Cars to Be Launched in Rwanda Today 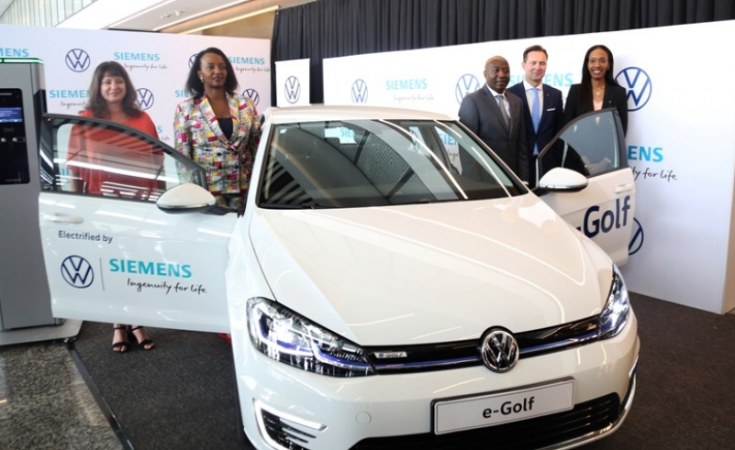 Electric vehicles will debut in Rwanda today through a partnership between Volkswagen and Siemens under a pilot project.

The vehicles, to be launched in the presence of Prime Minister Edouard Ngirente, are dubbed e-Golf. Rwanda is the first African country where Volkswagen is testing electric cars.

Today's launch will see four of the cars unveiled on the local market with one charging station at the Volkswagen facility at the Special Economic Zone.

Officials at the firm say that more cars will join the market in the coming months to bring the number to about 20 cars and 15 charging stations across the city.

The electronic car will be of the Volkswagen Golf Model.

While the Rwandan VW plant currently assembles three models in Kigali, the new electronic model will be produced in Germany and imported.

Siemens role in the partnership involves setting up charging stations.

Michaella Rugwizangoga, the Chief Executive Officer of Volkswagen's operations in Rwanda, said the cars are fully electric, not hybrid.

Prior to today's launch, Siemens, alongside the City of Kigali and Rwanda Energy Group, conducted an assessment of the city's grid to establish whether it can support innovation.

They said that the findings showed that the city's grid was adequate to support the charging stations at the launch and consequent phases of the pilot project.

In June this year, Rwanda Energy Group said that there not adequate demand for energy in Rwanda compared to production capacity and called for firms to consume more energy.

Nadege Gaju, the Head of Sales and Marketing, said that it's this data that will inform the consequent rollout of the project's other phases.

Rugwizangoga said that the pilot project is also part of the Volkwagen's global ambitions of phasing out the combustion engines in the next decade as the firm seeks greener ambitions.

Rugwizangoga said that the firm is currently training drivers and technicians on the driving and maintenance of the electric cars.

During the launch of the facility in 2018, the firm said that they had the capacity to produce up to 1000 cars annually under the models (Passat, Polo, Amarok and Terramont)

It was expected to produce 90 cars by March this year.

Company executives were tight-lipped on the number of cars produced so far as well as the sales into the local market citing confidentially.

A semi-knocked-down kit is whereby partially assembled parts and shipped in and then all put together for sale to customers.

The components of the cars are shipped from various markets such as South Africa, the US and Argentina.

They, however, disclosed that the Terramont model has the highest demand in the Rwandan market.

Previous Story
Tagged:
Copyright © 2019 The New Times. All rights reserved. Distributed by AllAfrica Global Media (allAfrica.com). To contact the copyright holder directly for corrections — or for permission to republish or make other authorized use of this material, click here.