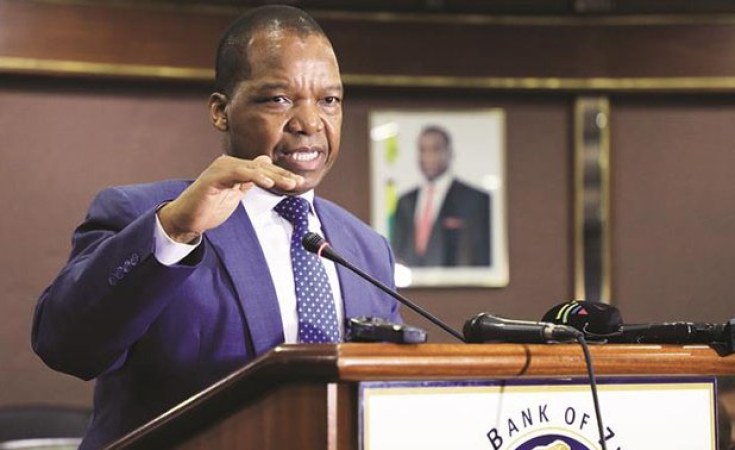 Tawanda Mudimu/The Herald
Reserve Bank of Zimbabwe Governor John Mangudya addresses the media on the deliberations of the Monetary Policy Committee in Harare.
The Herald (Harare)
By Martin Kadzere and Farirai Machivenyika

New $5 notes and $2 coins will be in circulation within a fortnight to ease cash shortages that have resulted in cash barons charging premiums of up to 60 percent and the unscrupulous breaking of the law with two-tier pricing for digital money and cash.

The new notes and coins will not be inflationary as RTGS dollars will be removed from circulation as cash is issued.

Briefing the media after a two-day meeting of the Monetary Policy Committee (MPC) yesterday, Dr Mangudya said the new notes and coins will circulate alongside bond coins and notes and have the same value.

The injection of additional cash into circulation will also see an upward review of daily withdrawal limits. These will be announced later.

Explaining why more cash will not fuel inflation, the governor said: "When you are substituting your cash for plastic money, you don't increase inflation, but what it does, it will help the population . . . to the extent that people are going to use their money without being charged premiums."

Zimbabwe has experienced cash shortages over the past few years despite the introduction of bond notes in 2016 to supplement the US dollars, a dominant currency under the multi-currency regime adopted in 2009, but ended in June this year.

But the supply of local dollars remained limited, with cash hoarders pulling enough out of circulation to cause the premiums.

Most Zimbabweans need cash for kombi fares and, if they can get cash without a premium, they can buy cheaper goods in the informal sector where two-tier pricing is rampant.

Mobile and digital money has largely replaced cash for most transactions, but these two areas still remain and raise effective prices for those forced to pay the premiums to commute to work or use nearby vendors and tuckshops rather than pay expensive fares to reach a shopping centre.

Dr Mangudya said the committee had noted that the level of physical cash in the economy was inadequate to meet transactional demand, considering that the current proportion of cash to broad money supply of four percent was lower compared to regional and international levels of 10 to 15 percent.

This low ratio had resulted in an undesirable cash premium which the "committee would like to see eliminated."

"In this regard, the committee noted with satisfaction the fact that the domestic economy in 2019 achieved new heights in terms of the utilisation of electronic systems for market transactions," said Dr Mangudya.

"However, the committee felt that there was a need to boost the domestic availability of cash for transactional purposes through a gradual increase in cash supply over the next six months."

On why the MPC decided to issue smaller denominations given recent inflation, Dr Mangudya said: "We thought of being conservative and we will graduate with time."

Monthly inflation is expected to drop to between 10 and 12 percent by year end.

Dr Mangudya said while the economy will contract by 6,5 percent this year due to the effects of drought and Cyclone Idai, basic economic fundamentals "remain sound" to meet the country's stabilisation and development objectives.

At US$780 million, funds in nostro accounts are at their highest level since 2009, while forex receipts are averaging US$500 million a month.

Economist Mr Brains Muchemwa said the immediate impact of increasing the supply of cash would be the disappearance of "unreasonable" premiums on cash.

"The reluctance to inject more cash (by RBZ) was so worrying because we can't have poor citizens, already ravaged by inflation, to pay so huge premiums charged by mobile money agents and retailers when transacting using other form payments," he said.

"This will definitely bring sanity."

Finance and Economic Development Minister Professor Mthuli Ncube said the new notes and coins were "not a new currency".

"We have that already," he said. "What is happening is a cash injection to deal with the cash shortages and reduce arbitrage opportunities. The new currency was introduced on the 24th of June through Statutory Instrument 142."

Prof Ncube could not divulge how much of the new notes and coins would be circulated, saying he was leaving the "technicalities to the RBZ".

Consumers hope the introduction of more physical notes will not only eliminate premiums on cash, but also remove multi-tier pricing that was prejudicing citizens of the true value of their earnings.

"We hope this is not just mere talk and we expect the central bank to release enough cash to meet demand," said Ms Judith Marizane, a Harare roadside fruit vendor.

"The general public has suffered for quite long. Their spending power is being eroded by huge premiums and we hope this will bring all this madness to an end."

Shock As 50 Firms Cling to Half of Country's Bank Balances

Will New Notes and Coins Address Zimbabwe's Cash Shortages?
Tagged:
Copyright © 2019 The Herald. All rights reserved. Distributed by AllAfrica Global Media (allAfrica.com). To contact the copyright holder directly for corrections — or for permission to republish or make other authorized use of this material, click here.