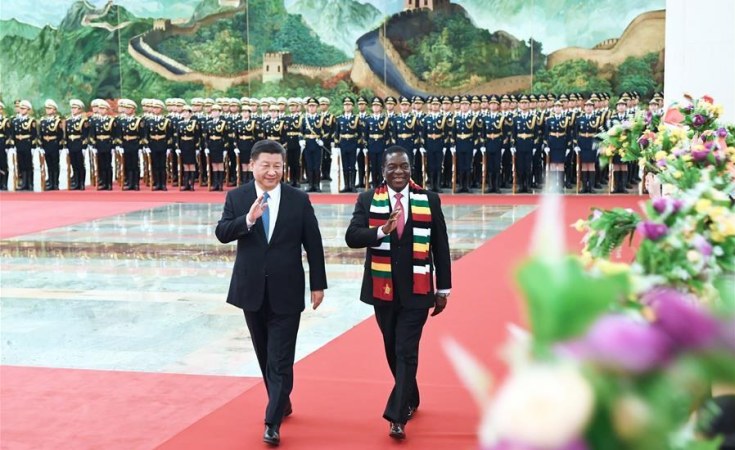 Government officials were this week nervously scrambling to salvage three big Chinese-funded infrastructural projects totalling US$1,324 billion, which are on the verge of collapse after US$10 million was raided by authorities from an escrow account held at a local commercial bank, considerably testing the Zimbabwe-Sino relations.

The affected infrastructural projects are the US$1,1 billion Hwange Thermal Power Station units 7 and 8 refurbishment, US$153 million Robert Mugabe International Airport expansion and the US$71 million NetOne expansion, which are at various stages of implementation.

They are being bankrolled through various loan facilities secured from the Export-Import Bank of China and other financial institutions.

Shanghai Construction Group has also complained that it is failing to access hard currency as it constructs Zimbabwe's new parliament in Mount Hampden through a US$100 million free grant from China-Aid.

There were frantic denials from some government officials, especially Treasury permanent secretary George Guvamatanga, when the Zimbabwe Independent broke the story last Friday, leading to Chinese deputy ambassador Zhao Baogang being asked to clarify the matter by delegates at a public debt conference in the capital.

Zhao told delegates: "There are companies who are handling the projects in question. Those companies may have given the information to the newspaper people.

Well, I'm in no position to deny it, but I cannot also confirm it. All I can say is that the newspaper people are well-informed."

The Finance Ministry this week confirmed that the money for the projects -- which was in foreign currency -- was converted into local currency, the Zimbabwean dollar that was demonitised at the height of hyperinflation in 2009, but bounced back in June.

The ministry also added that efforts were underway to rectify the touchy situation.However, the ministry, shifting blame and hiding behind semantics, said the money was not "raided" by government, but converted into local currency by Stanbic Bank. Clive Mphambela, the Chief Director-Communications and Advocacy in the Finance Ministry, absolved government of any wrong-doing.

"The correct position is that, following the promulgation of SI (Statutory Instrument) 142, some banking institutions correctly moved to implement the full provisions of SI 142 across the board. This is a matter that the authorities are still looking

into for resolution with regards to some entities that may have been inadvertently affected by the operation of the new law," he said.

Government promulgated SI142 on June 24 this year. It banned the multi-currency regime, which had been operating since 2009 and restored the Zimbabwe dollar as the sole legal tender in a new mono-currency system.

Mphambela referred further questions about the raiding of the forex for the projects, which authorities want to explain away as part of currency reforms, an excuse the Chinese are not buying, to the Reserve Bank of Zimbabwe (RBZ) "under whose purview, exchange control and banking matters fall".

"What was required by the funders was confirmation that the escrow accounts continue to operate as foreign exchange-denominated accounts which is exactly the position of the status of those escrow accounts."

However, it is understood the Chinese companies involved have been unable to access their money in forex despite numerous complaints over the issue. This led to engagements between the Chinese and authorities before and after the Independent story. The issue escalated this week after President Emmerson Mnangagwa reportedly raised queries and concerns with Treasury and central bank authorities.

Official sources told the Independent that senior government officials, among them, Guvamatanga, RBZ governor John Mangudya -- have since intensified talks with Chinese embassy officials, including Ambassador Guo Shaochun and Baogang, over the matter. The raiding of the escrow account -- where funds are held in trust while two or more parties complete a transaction -- left the Chinese shocked about the breach of trust and confidentiality. The move had strained relations and further complicated co-operation arrangements between the two countries.

Officials revealed that government has made assurances that the project funds will be restored and protected as hard currency, fearing that failure to do could lead to the Chinese maintaining a freeze or completely pulling out of the projects. The affected projects are the only major infrastructural projects in the country at the moment.

A freeze by China, sources said, would further isolate Harare, which is now a pariah state again from an international relations, economic and financial point of view, particularly in view of United States financial restrictions still remaining.

The Independent understands that the Chinese are, however, keen to fix the situation, but remain worried by government's failure to uphold property rights and protect foreign investment.

Sources said China Eximbank, which withdrew funding for the projects in protest, has maintained that it will only resume funding when the raided funds are returned.

"The Chinese have been dismayed, but remain positive about it. China Eximbank has indicated it will resume funding the projects once the money effectively raided through a currency conversion is returned. In the meantime, and as a sign of goodwill, the Chinese embassy has encouraged companies undertaking the project to use their own funds to do some work, as they hope the Zimbabwean government will honour contracts and financial arrangements.

"The companies, however, have limited funds and cannot complete the project or do significant work without funding from China Eximbank and other institutions. As of this morning (Thursday) the funds had not been returned and Eximbank was holding out."

Palmer Mugavha, the Stanbic Bank head of marketing and communications, declined to comment, citing bank-client confidentiality."As you are aware, banks are bound by several codes of ethics and data privacy, one of them being client confidentiality. Therefore we cannot comment to third parties about our clients' details," Mugavha said.

The airport project is being undertaken by Jiangsu International and was being funded through a concessional loan facility from China Eximbank.

There were already questions over the US$1,1 billion Hwange 7 and 8 expansion project being undertaken by Sinohydro. Zesa officials told Power and Energy Development minister Fortune Chasi during a tour of Kariba Power Station that China Eximbank was considering withdrawing funding for the Hwange project after the escrow account for the project was also raided.

Zesa was expecting the bank to register its misgivings in writing, indicating the escalation of the gravity of its reservations. The expansion of the Hwange plant, which is 22% complete, is expected to add 600 megawatts to the national grid. The NetOne project is meant to expand the company's mobile telecommunications network through setting up and upgrading base stations across the country. The affected projects are among the several multi-billion dollar sectoral infrastructural deals China lined up for Zimbabwe following Mnangagwa's visit to Beijing, where he met Chinese leader Xi Jinping last year.

Secrecy Shrouds Chinese Firm's Return to Zimbabwe Diamond Fields
Tagged:
Copyright © 2019 Zimbabwe Independent. All rights reserved. Distributed by AllAfrica Global Media (allAfrica.com). To contact the copyright holder directly for corrections — or for permission to republish or make other authorized use of this material, click here.