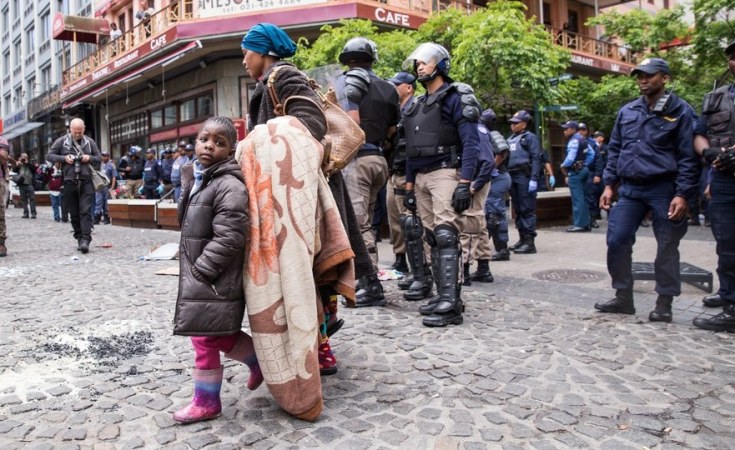 Tempers were starting to fray among some foreign nationals taking refuge at the Cape Town Central Methodist Church on Thursday after the police removed them from an arcade near the UN's refugee offices.

Still in a holding pattern after their sit-in at the Waldorf Arcade was ended with stun grenades and the police arresting around 100 people on Thursday, squabbles started breaking out.

Mothers and fathers were exhausted from Wednesday's eviction from the arcade and having to keep an eye on their children who ran up and down the church's red-carpeted aisles.

With luggage and blankets around them on the pews and every available floor space, the heat and uncertainty over their future seemed to be taking its toll.

Cape Town Mayor Dan Plato called on the UN High Commissioner for Refugees (UNHCR) and Department of Home Affairs to step in and help as Longmarket Street took the overflow of people who could not fit into the church.

The UNHCR issued a statement asking foreign nationals to return to their residences in South Africa peacefully.

It said South Africa was hosting 268 000 refugees and asylum seekers already. Regarding the demand to be resettled in a country other than their country of origin, the UNHCR said this would be unlikely for the majority of the people at the church.

"The UNHCR has been engaging with the refugees and asylum-seekers since the onset of the protests, encouraging them to participate in constructive dialogue to address their grievances and find a peaceful resolution to the situation," it said a statement.

The SA Human Rights Commission's Chris Nissen told News24 that contrary to earlier claims, nobody had died during Wednesday's protest, nobody was in custody as most of the protesters were released on Wednesday, and no children were missing.

He said he had checked with the social development department and police and no files were opened regarding this.

However, Nadine Biuma insisted that her six-year-old child, Tatiana Biuma, was still missing. Nissen said he would take her to the police station to help report it.

"What I'm trying to do now is to get a high level official from the Department of International Relations and Cooperation. They must say what is possible, what is not possible," he added.

The Gift of the Givers spent the day distributing nappies, sanitary towels, lucky packets for the children, and a lunch of chicken breyani.

Meanwhile, a doctor wandered the aisles to assist people. A child started throwing up and was quickly tended to.

People are using the toilets at the church and some at businesses in the area.

Many of them are from the Democratic Republic of Congo and Somalia.

Most told stories of traumas they had left behind when they came to South Africa.

However, they felt unsafe now, adding there was xenophobia in South Africa, and nobody seemed to arrest people who committed crimes against them.

People who had been injured during Wednesday's stand-off with police hobbled around, angrily saying they had done nothing.

The police action followed after the building's management obtained a court order on October 18 to have people removed from the Waldorf Arcade.

Afterwards, they moved into the church that is run by Reverend Alan Storey.

Some of the foreign nationals are planning to lay charges against the police and City of Cape Town over the way they were treated on Wednesday.

Refugees in Limbo After Eviction At UNHCR