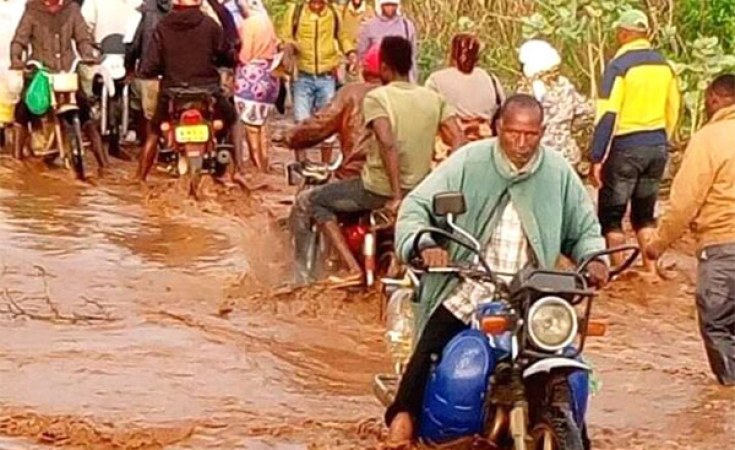 Lucy Mkanyika/Nation Media Group
Kitobo road in Taveta, Taita Taveta County on October 31, 2019. The area has been hit by floods due to heavy rains pounding the area and neighbouring Tanzania. The floods have killed three people.
Voice of America (Washington, DC)
By Lisa Schlein

Geneva — United Nations and private agencies are scaling up life-saving humanitarian operations in response to severe flooding across large parts of the Horn of Africa.

Massive flooding following months of unusually heavy rainfall is wreaking havoc in Somalia, Kenya, South Sudan and Ethiopia.  The United Nations reports hundreds of thousands of people have been displaced, tens of thousands of livestock have been killed, property has been destroyed and livelihoods shattered.

Jens Laerke, the spokesman for the U.N. Office for the Coordination of Humanitarian Affairs, says an estimated 220,000 of the more than half a million flood-affected people in Ethiopia are homeless.

“In South Sudan, flooding since July has affected more than 900,000 people, including internally displaced people, refugees and the host communities where they live," he said.  "The rains are likely to continue in South Sudan for another four to six weeks and put more people at risk.  We anticipate considerable damage to crops, arable land and livestock.”

Even before the rains began, Laerke says more than 3 million people were in need of humanitarian assistance.  He says that number is likely to increase, especially as more than 60% of flood-affected counties are facing extreme levels of acute malnutrition.

Similar scenarios of devastation are playing out in Somalia and Kenya.  The United Nations says all four countries urgently need life-saving aid to recover from this disaster.

Priority needs include food, water, shelter and health care services.  Agencies warn the flooding is causing an upsurge in waterborne diseases, malaria and cholera.  They say health promotion campaigns targeting flood-affected communities must be accelerated   to prevent these illnesses from spreading.

The United Nations is appealing to international donors for funds to support life-saving operations.  A total assessment of needs has not yet been made.  However, Laerke says the amount of money required will be substantial.  For example, he said the U.N. estimates that South Sudan alone will require $35 million in emergency aid.

Close to 300,00 Now Displaced By Floods As More Homes Submerged

East Africans Face Water Shortages, Damage After Floods
Tagged:
Copyright © 2019 Voice of America. All rights reserved. Distributed by AllAfrica Global Media (allAfrica.com). To contact the copyright holder directly for corrections — or for permission to republish or make other authorized use of this material, click here.