Uganda: Besigye Was Arrested for Defying Our Orders - Police 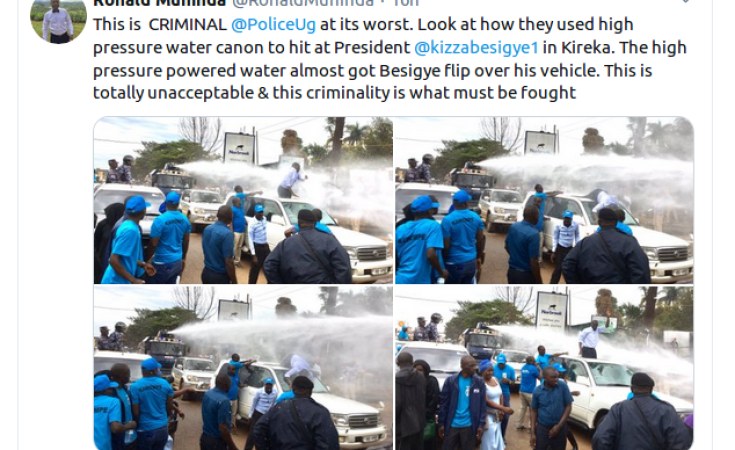 @RonaldMuhinda/Twitter
Ugandan police fire a water cannon at Dr Kizza Besigye. Pictures in a Twitter post by Ronald Muhinda, an aide to Besigye.
The Monitor (Kampala)
By Monitor Team

Unspecified number of Forum for Democratic Change (FDC) party supporters are in police custody following a scuffle with detectives that lasted about four hours in Kireka in Kira Municipality Monday morning.

Trouble started after security blocked a planned FDC party conference at Mandela National Stadium in Namboole. Heavily armed police and military officers condoned off the stadium and turned away whoever approached the facility.

The angered the FDC party members who decided to march in a procession from Mandela national stadium to their party headquarters in Najanankumbi were intercepted by police that tried to disperse their procession on the busy Kampala-Jinja highway.

Some of the FDC party supporters on foot and vehicles soldiered on attracting crowds, which prompted police to use tear gas, water cannon and live bullets to disperse them. This resulted into running battles between police and the FDC party members whose numbers kept growing.

To contain the situation, police tried to arrest the leaders of the procession including Kira Municipality Member of Parliament; Ibrahim Ssemujju Nganda, who is also the FDC party spokesperson, but he disappeared. Dr Kizza Besigye, the former FDC party president continued waving to the crowd from his vehicle.

Police blocked his car with the help of about six police patrol trucks and later towed his car to Naggalama Police Station. However, some of the chains used to tow Besigye's car broke as the crowd cheered the four-time presidential candidate who could come out of the open roof vehicle and wave to them.

At this point, used a water cannon to force Besigye out of his car. They later managed to force him out of the vehicle and bundled him into a police van, which sped off to Naggalama.

In a statement, police said on Monday afternoon that FDC informed them about the intended celebration and they wrote back to them advising that they should shift the venue but they ignored their directive.

"FDC informed us about the intended celebration and were wrote back to them advising that they should shift the venue but they ignored our directive. Besigye defied police orders and parked his vehicle in the middle of the road, blocking and inconveniencing other road users. The car was towed away and he was taken to Naggalama Police Station. At the moment no charges have been preferred against him but investigators are still gathering evidence," Kampala Metropolitan police spokesperson Mr Patrick Onyango said.

He also refuted reports a woman was shot dead by police during the chaos.

"There's a photograph circulating on social media purporting that a woman was shot and killed today in Kireka Trading centre. This is not true. No death has been registered in this operation," Mr Onyango added in the statement.

As the 2021 electoral year nears, opposition political parties and pressure groups are struggling to lay strategies to confront Museveni. However, police have repeatedly broken their meetings citing failure to comply with the Public Order Management Act. Recently, Besigye and a number of his supporters launched a campaign dubbed 'Tubalemese', saying it will help the opposition to achieve their goals.

Previous Story
Tagged:
Copyright © 2019 The Monitor. All rights reserved. Distributed by AllAfrica Global Media (allAfrica.com). To contact the copyright holder directly for corrections — or for permission to republish or make other authorized use of this material, click here.