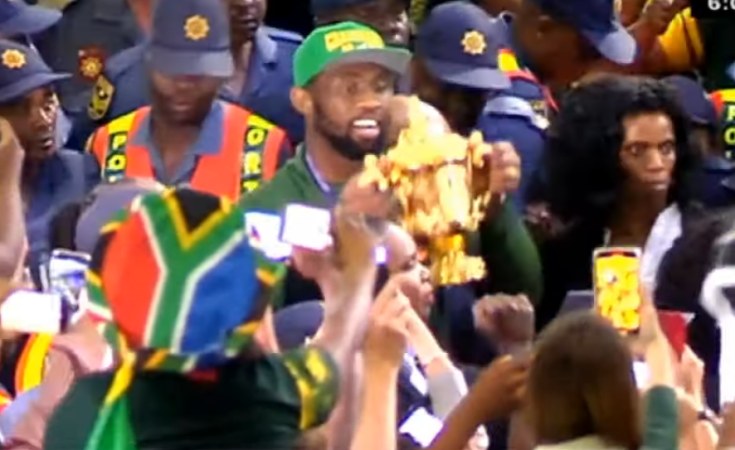 Siya Kolisi wrote his name in rugby folklore when he became the first black Springbok captain to lead the South African side to glory in the Rugby World Cup. But can SA Rugby build on this euphoria?

As Kaunda Ntunja, television channel SuperSport's peerless isiXhosa commentator, warmed to his task of ushering Springbok captain Siya Kolisi from his team's dressing room, through the bowels and on to the turf of the Yokohama Stadium before the Rugby World Cup final against England on Saturday 2 November, the Bok captain could be heard muttering one of the many Gwijo songs he loves as he led his side to their date with destiny.

From the day Bok coach Rassie Erasmus - a man whose calling card in the consciousness of rugby-loving South Africans is being in possession of a mind that has never seen the inside of a box - appointed him the first black Springbok captain last year, it was always clear that, to borrow from football coach José Mourinho, he wasn't one of the bottle.

Kolisi had neither the head prefect demeanour nor the ability to drop a sound bite on demand like Francois Pienaar or John Smit - men whose ranks of World Cup-winning South African captain he joined after his team's 32-12 victory of the Brits - but the often repeated humble nature of his beginnings meant he had them beat on embodying inspiration and his common touch with the masses.

Without putting words in his mouth, maybe that's why Ntunja focused his poignant and touching introduction to the World Cup final on Kolisi, the sheer reach of him leading the Boks to victory made this the most significant of South Africa's three World Cup titles.

The 1995 win carried with it the novelty of annexing a World Cup at the first time of asking, with first democratically elected president Nelson Mandela's cameo in the celebrations sprinkling rainbow dust on the resultant outbreak of patriotic fervour.

Twelve years later SA's win was a vindication of sorts of our rugby's status as a powerhouse on the international stage. But the victory in Japan was about that thing that Morgan Freeman's character Ellis Redding told us was a dangerous thing in the film The Shawshank Redemption - hope.

The day before the Boks overcame their underdog status in the final to beat the well-heeled might of England, credit ratings agency Moody's gave South Africa's economy a negative rating. This in the same year in which 1995 rugby heroes James Small and Chester Williams died. This in a country grappling with enduring racial division and an inexplicably violent culture towards its women and children.

It doesn't matter from which angle you look at it, 2019 has been a rough year for South Africans. In a way, that's why Erasmus and Kolisi have pandered to the theme of hope in their utterances post their upset win over England.

No team had ever won the World Cup after losing a group stage game like the Springboks did to New Zealand in their campaign opener. But the Boks could take heart from the fact that no side losing to Italy two years ago had any right to be in a World Cup final this year.

"We've got the privilege to bring people hope," Erasmus told the world media. "Because South Africa has a lot of problems, we started talking about how rugby shouldn't be something that puts pressure on you. It should be something that creates hope. But you can't create hope just by talking about it, hope is not something you say in a beautiful tweet."

Kolisi was preaching from the same page as his coach: "A lot of us in South Africa just need an opportunity. There are so many untold stories. I'm hoping that we have just given people a bit of hope to pull together as a country to make it better."

And ever the sound-bite merchant, Smit succinctly contextualised the achievement to the British Broadcasting Corporation ahead of the final: "If Siya touches that trophy on Saturday ... it will be a far greater moment than 1995. Siya has more responsibility than I did or Francois did because he represents more people."

Love-hate relationship with the Boks

But the chattering classes of the woke kind have reacted with typical suspicion and voiced it in their not-so-beautiful tweets. The gist of their message is that the victory is rugby's and not that of black South Africans, and that winning the World Cup will do little to change the country or alleviate its day-to-day struggles.

Apart from the obviousness of the latter part of that assertion, the woke lot do have a point in that past World Cup victories sold us hope of a unity that, to be honest, wasn't there to begin with.

The goodwill engendered by the World Cup wins in 1995 and 2007 was frittered away as self-interest took over on the part of the game's custodians, an "us and them" divide developing almost as soon as the open-top buses in the ticker-tape parade receded from view.

The battle for rugby's soul has always been pitched along relatively simple lines: Madiba wanted to use it as a tool for reconciliation, while too many of its guardians still take their cue from apartheid's brief of using it as a weapon for segregation.

Still, to use that history to predict exactly the same future is ignoring the current Springbok team, its personnel and its achievements.

Maybe a great example of this wilful mistrust is the Bomb Squad incident, where the forensic social media detectives among us saw footage at the end of one of the World Cup matches, decided it was racist and when the central character in that - winger Makazole Mapimpi - took to social media to explain what had happened, he was dismissed as a pawn in a much bigger game.

With that kind of thinking, it's possible to see Kolisi become the first black captain from any country to lift the Webb Ellis Cup, watch Mapimpi, Cheslin Kolbe and Lukhanyo Am play starring roles in the final and still equate the occasion to those in which the Boks had one and two black players, respectively, in the other two World Cup wins.

The pity is that we then ignore the fact that Erasmus' World Cup squad has added all walks of life to rugby's adage that a team is made up of all shapes and sizes.

Mapimpi and Frans Steyn come from schools not known and known for producing rugby talent, respectively, yet they worked side by side to win the World Cup; Am and Malcolm Marx are as different as you can imagine, but being brought up by single mothers means they have a lot more in common than meets the eye, to name but two examples.

There's an everyday South Africanness within the Bok team that has never been there before - from a Schalk Brits playing at an age relatable to most of us to a Kolbe who is smaller than most of us - and to throw away the possibilities that presents by way of inspiration for young and old simply because we've seen this movie before seems churlish.

One of the big questions that should be asked in the immediate aftermath of this World Cup win is how mother body SA Rugby will look to maintain consistency in Bok performances. There's a good reason the Boks only ever seem to win World Cups in 12 year intervals: they throw away the blueprint that won them the tournament and somehow expect to maintain a competitive edge.

How many times has a Bok coach taken a team to the global showpiece, learnt valuable lessons and been dismissed without sharing said lessons with his successor?

Erasmus will be looking to address that by moving upstairs and into his role as director of rugby, meaning that for the first time the Boks will have continuity and the retention of intellectual property.

But as Ntunja said in his opening tribute to Saturday's final, someone like Kolisi - who has taken turns letting fate do its thing and cajoling destiny to do his bidding en route to being a history maker - will be needed to be the face of the way forward. Just having a man with his back story in the mix is bound to infuse young and old with the idea that obstacles are just that, things to be scaled.

It'll take an awareness previously not there to make sure that the hope and inspiration this World Cup campaign has brought is not wasted, but the building blocks - and people - to do that are already there.

Siya - I Begged Rassie to Lift Trophy With Me