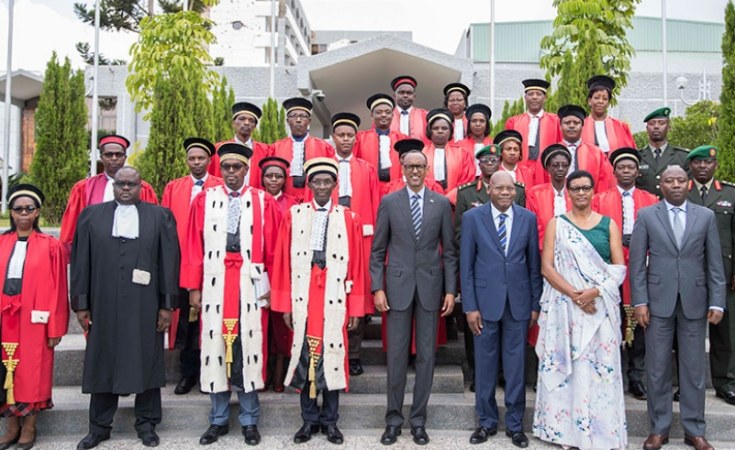 President Paul Kagame has called for joint efforts in solving national problems and improving service delivery in the judicial system.

He was speaking at Parliament on Tuesday where he was presiding over the ceremony to conclude the 2018/2019 judicial year.

Kagame told judges, lawyers, prosecutors and other justice sector stakeholders that it is important to constantly review themselves and find ways to better to serve citizens.

"We should constantly strive to fix the challenges we face, and this requires everyone's involvement and strong commitment," he said

The President added that; "We must work hard, keeping in mind that we are serving citizens, get closer to them, listen to their challenges and work together to solve them."

Kagame advised those in charge of enacting laws and their stakeholders to consider imposing heavier consequences for crimes like child rape.

The President of the Supreme Court, Sam Rugege, whose mandate expires this December, said that that though there is still some work to be done, the judicial sector has seen significant improvement.

"Today, a court case takes four months. That is below the six months mark that is determined by the law. In the Supreme Court, that number dropped from 69 months in 2011 to 4 and a half months this year and we are constantly trying to improve on that timeline," he said.

The Prosecutor General, Jean Bosco Mutangana, gave an update on the gains made over the past year, pointing out the work done to bring those suspected to have participated in the 1994 Genocide against Tutsis to justice.

"We have a team of 30 lawyers who are specifically set aside to help children and so far 2450 children have received this support," he said.

"We have also put 20 lawyers in charge of providing the underprivileged with legal services in the (court of) Appeal and Supreme Court."

Last year alone, the RBA provided services to 600 people in the Appeal and Supreme courts.

The lawyers have provided legal aid to 3720 people, valued at Rwf2.1 billion.