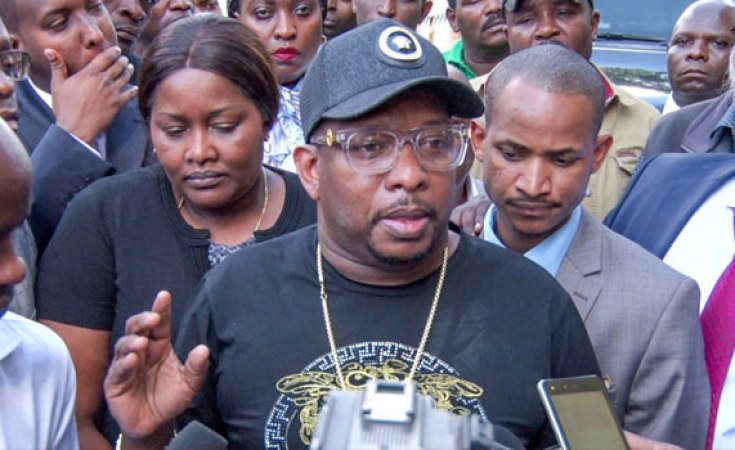 Nairobi — Nairobi Governor Mike Sonko on Tuesday denied misleading the Ethics and Anti-Corruption Commission (EACC) on his criminal record while seeking clearance ahead of the 2017 gubernatorial contest.

The county chief denied filing a false self-declaration form in which he is said to have omitted his conviction in 1997 after which he was served a jail term.

"In their form which they are saying I gave false information there is a part I was asked if I was ever convicted and my answer was no. The reason being there is a difference between conviction and sentencing. I have not undergone any trial in all my cases. There is no single case in which I was convicted," said Sonko.

He claimed there are people with personal interests determined to have him removed from office, questioning the motive behind investigating a case that happened in 1997, despite the Directorate of Criminal Investigations (DCI) having cleared him.

"The deal here is to remove me from office because I have been fighting cartels among them land grabbers and corrupt officials, but I will not be intimidated from addressing the real issues I'm pursuing for the public," he said.

The city Governor said it was absurd that the same declaration form was used to clear him in 2010, 2013. He wondered why the ethics agency raised the matter in relation to the 2017 poll.

Sonko's arrival at the commission headquarters in Nairobi was marred with chaos forcing police to teargas hundreds of youths who marched in solidarity with the county head.

Shortly after leaving the EACC chambers Sonko told journalists that he has never shied away from his having served a prison sentence in the past but clarified that he was never convicted.

Sonko, who within two months has been summoned four times by the commission to record statements on different issues, now claims that that the numerous summonses are a mere witch-hunt due to his stance on the fight against corruption.

The Governor has sacked several county officials since taking over from Evans Kidero accusing them of being corrupt and incompetent.

His critics have however accused him of micromanaging executives by issuing them threats.

Sonko spent close to 8 hours at EACC headquarters in September where he was being grilled over garbage tenders totaling over Sh160 million which were under question.

Embakasi East Member of Parliament Babu Owino who accompanied Sonko said that the Governor should be allowed time to work for Nairobi residents, dismissing the probe as a witch-hunt.