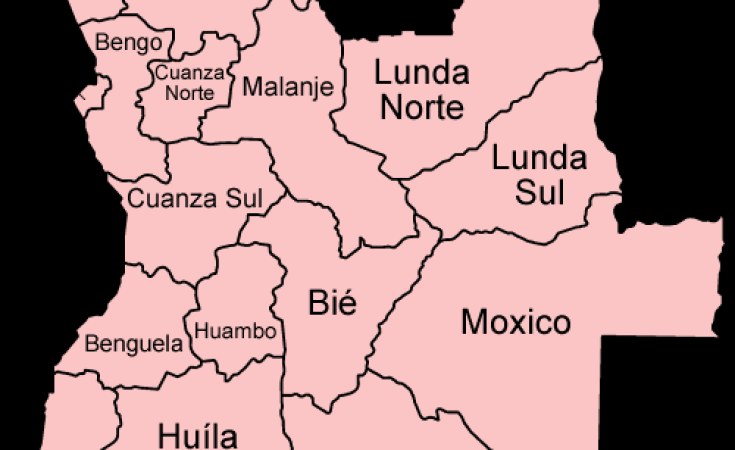 An armed attack on a prison in the north-eastern Angolan province of Lunda-Sul which resulted in the deaths of at least five people, has been blamed on a misguided attempt to free a self-styled independence leader. Responsibility for the attack is said to lie with a man calling himself "Commander Thunderclap" (*see below) who says it is the opening salvo in a liberation war for the independence of the Lundas.

The diamond-rich region comprises twin provinces - North Lunda (Norte) and South Lunda (Sul), largely inhabited by descendants of the Tchokwe nation. It is no stranger to separatism. Local communities have long displayed discontent with Angola's central government. While politicians, generals and foreign interests have carved out immense fortunes over decades, the lot of local people has not improved since colonial times, leading to simmering resentment and a growing appetite for self-rule.

The Angolan authorities are notorious for suppressing separatists. Ten years ago, they briefly detained more than 270 people across Lunda Norte and Lunda Sul, simply on suspicion of belonging to a movement called the Comissão do Manifesto Jurídico e Sociológico do Protectorado da Lunda-Tchokwé (the Lunda-Tchokwe Protectorate Sociological and Juridical Manifesto Commission). Its leader, José Filipe Malakito, spent the next two years in jail for having dared call for independence for the Lundas. Thirty-seven of his colleagues were also detained for lengthy periods.

Numerous instances of arbitrary detention for political reasons in the intervening years have only added to the simmering anger.

After Malakito was removed from circulation, another group appeared, the Movimento do Protectorado Lunda-Tchokwé (Lunda-Tchokwe Protectorate Movement) which staged peaceful street protests calling for autonomy. Whenever MPLT supporters gathered, the Armed Forces would crack down on them. Two years ago, more than half the 80 identified members of the MPLT arrested during a meeting on May 24, 2017 were found guilty of disorderly assembly by a provincial court. They were accused of waving firearms at their meeting but their leader, José Zecamutchima, decried the verdict as a farce saying that the protestors were peacefully holding up their ID cards when they were arrested en masse.

At the beginning of this year, a lowly petrol pump attendant, petty criminal and part-time amateur rap artist who had once served in the armed forces, appeared on social media calling himself the "military commander" of the Lunda-Tchokwe separatists and nominating October 30 as the start of armed rebellion against the central government in Luanda. It earned "Commander Thunderclap" a spell in a Saurimo jail.

However, come October 30, an attack was mounted. The target was Luzia Jail, outside Saurimo. The police report said five of the attackers died "in the attempt to free an un-named detainee". One of their number was gravely injured and a further 18 were arrested while three prison guards also suffered injuries. The report said these "persons unknown" were armed with at least one AK rifle, machetes and spears.

With 18 people in custody, the police ought to have some clue as to their identity (as should local lawyers as Angolan law gives detainees the right to legal representation).

The fact is the police were being coy.

Maka Angola has learned that the young men who risked (and in at least five cases, lost) their lives were acolytes attempting to free the 30 year-old pump attendant who calls himself "Commander Thunderclap".

In a message allegedly smuggled out from his cell, 'Thunderclap' introduces himself as the founder and leader of a group he calls the 'Revolutionary Front for the Integration and Sociological Independence of Lunda-Tchokwe' (Frente Revolucionária para a Independência Sociológica e Integridade da Lunda-Tchokwé, FRISILT), saying that though physically detained, spiritually he remains free and concerned only with liberating his people.

His Facebook page shows the "Commander" in profile, dressed in camouflage and holding a Kalashnikov (AK) aloft and for more than a year he has been posting calls for an armed uprising for the Lundas to secede from Angola. However, it appears that no-one took him seriously nor believed him capable of mobilizing others to emulate the actions of those Angolan heroes who kicked off the fight for national liberation on February 4, 1961 by attacking a jail armed with little more than machetes.

José Zecamutchima, who led the MPLT, told Maka Angola he knows some of those involved and tried to talk them out of doing anything violent but was insulted as "past his sell-by date".

"Trovoada [Thunderclap] was a conscript who deserted from the Angolan Armed Forces while stationed in Cabinda," José Zecamutchima told us. "He spent six months in jail in 2017 for armed robbery against stores owned by West Africans and pretty much as soon as he got out, he began talking about starting a war."

Zecamutchima says there were about 30 in all involved in the attack on Luzia jail and their only weapons were machetes. From what he has heard he believes eight young men died and another is in a serious condition

In addition to open letters to the Angolan and Portuguese Presidents calling for the return of pre-colonial lands to Tchokwe sovereignty, 'Commander Thunderclap' posted repeated threats on his Facebook page that a violent uprising would begin on October 30. A few dozen of his social media followers who commented on those posts also openly expressed their support for his "war". They weren't the only ones who took note.

At the end of August, 'Thunderclap' revealed he was under investigation by Angola's Criminal Investigation Service (Serviço de Investigação Criminal, SIC) and had been briefly detained. That did not deter him. On September 8, he published a warning that any armed soldiers and police officers would be considered fair game and would be killed, mercilessly.

His public threats and appeal for a war to start on October 30 are incriminating in themselves: an attempt to incite armed insurrection, further supported by the fact that his supporters launched their attack to free him on that very day.

This whole farrago may seem a storm in a teacup. But the fact is that the "Thunderclap Affair" is further evidence of regional tensions in Angola that the central government may be taking too lightly.

One Angolan Armed Forces General, speaking to Maka Angola on condition of anonymity, says they have seen a sharp increase in those calling for armed uprising in the Lundas over the past ten years.

"There's a similar level of discontent along many frontier provinces", the General says. "But unlike Cabinda, Cunene and the Dembos (Bengo), we have seen nothing to compare with the situation in the Lundas."

He acknowledges that the lack of any benefit to local communities from the extraction of mineral riches, along with political neglect and social exclusion, create pervasive despair which he admits is the extremists' "best recruiter". His concern is that outside sources could take advantage of this widespread resentment to fuel instability, as has happened in other African countries such as Mali, Mozambique and Nigeria where global jihadi groups have armed separatists.

Our military source is keen to warn would-be separatists against the misguided belief that they can take advantage of perceived disarray in the Angolan army. "Don't forget that Angolan military intelligence is highly efficient, and we can count on large numbers of Angolans with combat experience, thanks to four decades of civil war."

There seems little chance that "Commander Thunderclap" will emerge from prison any time to soon to lead any such insurrection.

Opposition Parties Welcome Angola's Proposed Constitution Review
Tagged:
Copyright © 2019 Maka Angola. All rights reserved. Distributed by AllAfrica Global Media (allAfrica.com). To contact the copyright holder directly for corrections — or for permission to republish or make other authorized use of this material, click here.