Uganda: I Fell Out With Bobi 13 Years Ago, Am Now in Charge of the Ghetto 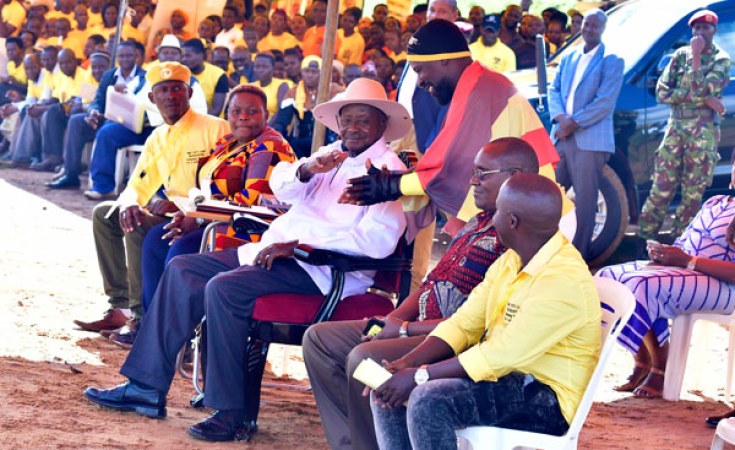 PPU/Daily Monitor
President Museveni (in hat) with NRM youth from the ghetto near Kibuye roundabout in Kampala.
The Observer (Kampala)
interview By Our Reporter

Mark Bugembe alias Buchaman was recently appointed by President Yoweri Museveni as the Special Presidential Envoy for the Ghetto Affairs.

The Observer caught up with the NRM appointed Ghetto president at the Ghetto State House in Luwafu, Makindye. It is not an easy feat either to see the president. After waiting for an hour, the president's aides allocated The Observer only five minutes for an interview. Below are the excerpts:

Yah man, I thank President Museveni for remembering the ghetto people and I can tell you, I have a big plan for the ghetto.

What are the plans, then?

The president has big plans... education. And this will stop violence because politicians give these youth T-shirts and order them to become rowdy but if they have what to do, they will not be used.

This is the right time. Museveni knows I'm the right person to bring development in the ghetto.

Yeah, people were getting money but the money never reached the ghetto. For 30 years, people have been ' eating' money. Even those musicians claiming to be in the ghetto have long left the ghetto and are living in posh suburbs.

By the way, what did you tell Museveni?

(Laughs) I told him the poor here don't need much but education and food. This alcoholism is a result of joblessness.

Don't you think you are going to split the ghetto with Bobi Wine?

No! Development has no colour or party; so, joining Museveni or Bobi Wine doesn't matter. Remember I was not voted, maybe if I was voted, we could have clashed! (Laughs)

Any word for Bobi Wine?

Nothing. We have known each other for over 15 years and we have not talked for almost 13 years. There is no bad blood between us and there is nothing to talk about between me and Bobi Wine.

Do you have the appointment letter yet?

(Looks a bit surprised ).I have but I'm not in a rush for money. I want to help my people in the ghetto.

Isn't the president using you for political purposes?

Man! Museveni is not using me since he is the one who came to the ghetto! I am in charge of the ghetto and this is a new thing.

What would you tell Museveni today?

I will preach to him (tabira) that the youth want national identity cards ( IDs). For them to benefit from development programmes, they will need IDs. By the way, I also don't have an ID. President must also be informed that some LDUs have a habit of destroying people's IDs.

So, what's up with music?

Iii Yah man. I'm still in music and music is me. Even yesterday I was in the studio. I have been recording for the last 10 years in the ghetto.

How are you sorting out drug use and abuse?

You should know that there is a difference between drugs and herbs.

What is the difference?

Weed (enjaga) is a herb. The herb is acceptable. It is part of our heritage (enono) and Rastafarian culture. Anything else is a drug. There are those which they sniff, swallow and inject into bodies. The drugs are imported while the herb is grown locally in our gardens. Weed is medicine. I will not stop the ganja culture.

How do you want to be remembered?

That's simple; remember me as Buchaman who brought change in the ghetto and development.

Let us talk about family...

We Rastafarians call our wives empress, queens, lionesses. We don't disrespect our wives. In fact Rastafarians give much respect to their wives because they are queens.

How do you introduce your empress?

In the Rastafarian community, it's the women who introduce their men like Queen Sheebah introduced Solomon. That is why they are called 'Omukyala-yasoka okukyala'.

What is her name?

How many children do you have?

It is not right as a Muganda man to say how many children he has. It is against our culture.

Some childhood memories... What happened you were seen marching before President Museveni without crutch.

(Laughs heartedly)I was not born with a walking stick even if it broke, I can still walk without it only that the crutch enhances my pace.

Who are your parents?

I'm someone's son: Kabaka Kintu. I'm a Muganda born in Kyaggwe. My father is called Magezi ge Buggaga and my mother is an Itesot from Soroti.

We are in an extended family and I don't know how many we are ...

I'm going to move across all ghettos in Uganda; we are going to form Saccos for them.

Tagged:
Copyright © 2019 The Observer. All rights reserved. Distributed by AllAfrica Global Media (allAfrica.com). To contact the copyright holder directly for corrections — or for permission to republish or make other authorized use of this material, click here.