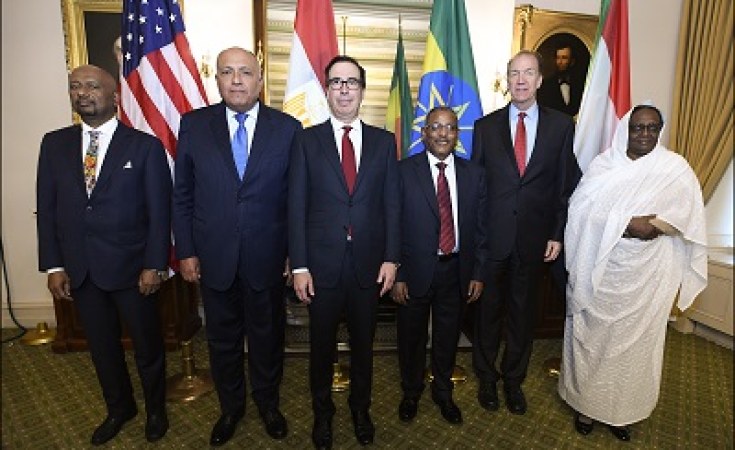 US Treasury
The foreign ministers of Egypt, Ethiopia and Sudan and their delegations met with the Secretary of the Treasury and the President of the World Bank in Washington, D.C. on November 6, 2019.
Deutsche Welle (Bonn)

The three African nations have said they will continue trying to resolve a conflict over plans for a massive Ethiopian-run dam along the Nile river. The project has raised concerns about shortages of drinking water.

Egypt, Ethiopia, and Sudan made a commitment to resolving a dispute over a large Ethiopian-led dam project after US-led talks on Wednesday.

The three nations issued a statement saying they would continue negotiations in talks to be held in Washington on December 9 and January 13 with the aim of finding a resolution by January 15 of next year.

"The ministers reaffirmed their joint commitment to reach a comprehensive, cooperative, adaptive, sustainable, and mutually beneficial agreement on the filling and operation of the Grand Ethiopian Renaissance Dam and to establish a clear process for fulfilling that commitment in accordance with the 2015 Declaration of Principles," the statement read. US Treasury Secretary Steven Mnuchin and World Bank President David Malpass also signed it.

The Grand Ethiopian Renaissance Dam, in the works since 2011, is a massive Ethiopian hydroelectric dam project along the Nile river. Ethiopia plans to start filling and operating the reservoir in 2020, with the aim of eventually completing one of the world's biggest dams and becoming Africa's biggest power exporter. Once complete, the dam will generate about 6,450 megawatts of electricity, double Ethiopia's current output.

The Nile provides both water and electricity to the 10 countries it passes through. Sudan and Egypt fear that the project could threaten their water supply. Egypt, which has suffered from a water crisis in recent years, relies on the river for 90% of its drinking water.

After talks between the countries broke down earlier this year, Egypt asked the US to step in as a mediator.

Water ministers from all three countries will attend the upcoming talks, as will the US Treasury and the World Bank.

In the event a resolution is not reached by the January 15 deadline, the ministers agreed to then involve an international mediator.

Joint Statement Of Egypt, Ethiopia, Sudan, The United States, And The World Bank

Ethiopia Asks South Africa to Help to Resolve Dam Dispute
Tagged:
Copyright © 2019 Deutsche Welle. All rights reserved. Distributed by AllAfrica Global Media (allAfrica.com). To contact the copyright holder directly for corrections — or for permission to republish or make other authorized use of this material, click here.