South Africa: 'I Was Proud to Have My Dad There' - Springbok Captain Siya Kolisi 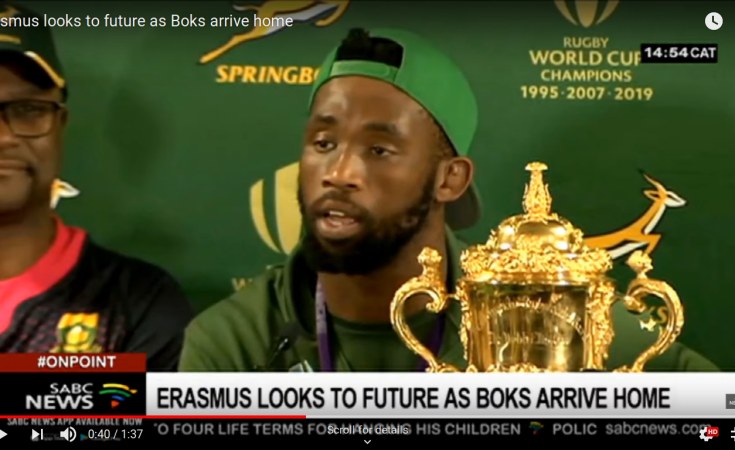 "I'm sure that was my dad's dream - to take me to all these places (across the world), but he never had the means. That's why I'm so grateful to rugby because it allows me to do such things".

This was Rugby World Cup-winning captain Siya Kolisi's response when asked how much it meant to him having his father, Fezakele Kolisi, in the stands of the Yokohama International Stadium in Japan as he led the Springboks to a 32-12 victory over England.

Addressing a packed media room on Tuesday at the OR Tambo International Airport upon his arrival, a visibly overjoyed Kolisi said he was proud to have been able to share the moment with his father.

"I am very proud right now and I was actually proud to have my dad there. I'm really proud that he could be there to share the moment. The team loves him [and] they welcomed him and it was really special for me and the rest of my family," the 28-year-old said.

Seated in the media room, the broadcasting camera turned to Fezakele as Kolisi spoke, who in turn gave the camera a wave, acknowledging his son's words.

Kolisi added that it was an opportunity to show his children "that family is really important".

"We had a great time and hopefully it wasn't the last one," he added.

Going into their World Cup campaign, the Boks adopted a #StrongerTogether slogan, coupled with their continued theme of having people's selfies on their match jersey playing numbers - to give literal effect to carrying a nation's hopes on one's back.

"The people back in South Africa know exactly what it feels like to have your back against the wall... people might be learning from us, but everything we took and did there, we got it from the people in South Africa," Kolisi said of the support.

And in keeping with Kolisi's well-documented rise from Zwide to World Cup winning captain, he said: "Anything can be overcome with opportunity. My drive when I was younger was just going to training every day. I was preparing myself for an opportunity just in case it came."

Springboks Demolish England, Recapture Rugby World Cup Glory!
Tagged:
Copyright © 2019 News24Wire. All rights reserved. Distributed by AllAfrica Global Media (allAfrica.com). To contact the copyright holder directly for corrections — or for permission to republish or make other authorized use of this material, click here.