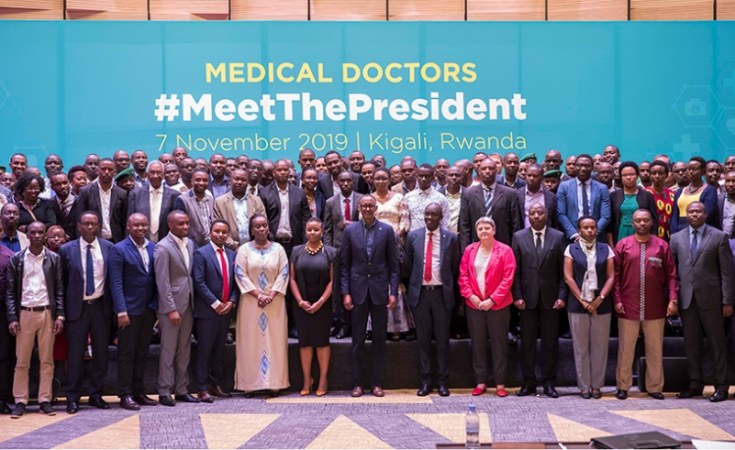 Photo: Village Urugwiro/New Times
President Paul Kagame and other senior government officials are joined in a group photo by medical practitioners in the country.
The New Times (Kigali)
By Julius Bizimungu

President Paul Kagame on Thursday told more than 800 medical doctors that the country cannot allow the achievements made in the health sector to be derailed by poor practices.

He was addressing medical practitioners during a meeting held at Intare Conference Arena in Rusororo.

The medical doctors told the head of state that the industry was marred by challenges of inadequate finance of medical facilities, lack of advanced equipment in hospitals, remuneration issues, and low level of skills, among others.

While that is true, Kagame said, it was critical to start with changing mindset and upholding the right principles that guide the medical career.

"It is true that this career is guided by certain ethics and principles just like other careers, but how you translate them from theory to actions is what determines the real understanding of those principles," he said.

"It is good and important for people to have principles, but it doesn't mean that they always apply those principles. And if those principles are not applied right, we lose a lot and that's the basis of most of the problems we face," he added.

The Head of State also indicated that the responsibility of medical doctor was to uphold professionalism and learn how to strike a balance between their personal needs and the needs of the people - the patients, their families and others.

"It is imperative to have the mindset that it starts with you. You don't have to wait for someone to tell you that what you are doing is wrong, it doesn't make sense." he noted.

He challenged the medical practitioners to explain the difference in the care given when a minister or someone perceived as important goes to the hospital and the entire hospital runs to attend to him, leaving the patients who are even more vulnerable to fend for themselves.

"How does a professional entertain that? How do you prioritize status over emergency?" he wondered!

The President shared examples of cases where doctors have failed to perform their job as a result of negligence, favoritism, carelessness and absence of professional ethics and principles.

Kagame pointed to initiatives that stalled as a result of poor understanding of principles or failure to abide by those principles, one of which is the 'Human Resources for Health (HRH) Programme' which was aimed at improving the quality and quantity of healthcare professionals in the country.

Attitude and perception must change, he said, insisting that there is no way the country can spend more than 20 years building public healthcare and still continue sending people abroad to seek services that can be found in Rwanda.

"The best way to address the problem is to start talking to yourself individually. You will then recognize and accept that it all starts with you. We can't afford to have our health system decline or move forward faster," he noted.

The gathering comes following series of complaints and concerns raised by patients who accuse doctors of negligence, among other things.

"Our profession should be characterized by basic moral principles like justice, accountability and empathy, which is what we aim to have," Prof. Emmanuel Rudakemwa, the Chairperson of the Council said.

Despite remaining challenges, the healthcare sector has been developing for the past years.

According to the Rwanda Medical Council, the regulatory body of the medical practice in the country, there has been an increase of 22 per cent in the number of medical practitioners in the last 25 years.

Rwanda has also succeeded in providing universal healthcare to its citizens, met the continental and global goal of investing 16 per cent of the national budget into the health sector, and bringing down the maternal mortality rate.