SDG 3: healthy lives and wellbeing for all

In 2015, the United Nations General Assembly approved Resolution 70/1, which contained its agenda for 2030, especially the Sustainable Development Goals (SDGs). Each of the 17 SDGs included goals within a goal - all of which are expected to be achieved by 2030. SDG 3 (ensure healthy lives and promote wellbeing for all at all ages) aims to achieve these by tackling maternal and infant mortality, ending epidemics and controlling substance abuse.

Prior to the introduction of the SDGs, the UN's Millennium Development Goals (MDGs) were credited with lifting more than one billion people out of extreme poverty by making specific gains on targets such as reducing hunger, increasing female education and advancing environmental protection. The SDGs are expected to build on this. In its 2015 Africa MDG Report, the UN Development Programme (UNDP) said that most African countries had made progress on at least one goal. "Much more work lies ahead to ensure living standards improve for all African women and men," the report stated.

"While economic growth has been relatively strong, it has not been rapid or inclusive enough to create jobs. Similarly, many countries have managed to achieve access to primary schooling. However, considerable issues of quality and equity need to be addressed."

Thanks to the MDGs, for example, Gambia reduced poverty by 32% between 1990 and 2010, Ethiopia reduced its poverty rate by one third by focusing on agriculture and rural livelihoods, Niger transformed men into allies in promoting women's reproductive health, family planning and behavioural change towards gender equality through a School for Husbands programme, and Cabo Verde increased its forest cover by more than six percentage points, with millions of trees planted in recent years.

The report added, however, that poor implementation mechanisms and excessive reliance on development aid undermined the economic sustainability of several MDG interventions. In its 2018 Africa Sustainable Development Report, the UNDP noted that while Africa was making steady progress in building the critical ingredients for sustainable and resilient societies, the pace was slow.

"Access to basic infrastructure such as energy, water and sanitation services is improving but falls well below the global average. Furthermore, the aggregate performance of the continent masks wide cross-country disparities," the agency stated. A review of SDG 3 targets shows that some progress is being made on the key issues globally, across Africa and in several individual African countries. Globally, the maternal mortality ratio has declined by 37% and almost 80% of live births worldwide occurred with the assistance of skilled health personnel - up from 62% in 2000-2005.

However, since 2000, the maternal mortality ratio has been reduced by 35%, while the under-five mortality rate has dropped by 50%. The incidence of HIV is also declining, from 0.40 to 0.26 per 1,000 uninfected people between 2005 and 2016. The UN's official assessment showed that the number of new cases of certain diseases important to public health in Africa - malaria, tuberculosis, HIV/AIDS and hepatitis - was falling.

Official development assistance (ODA) to Africa was projected to remain low over the period 2015-2018, at an average of around $47 billion annually. However, ODA for basic health from all donors had increased by 41% in real terms since 2010, reaching $9.4 billion in 2016. Nigeria, Africa's largest economy, which had the world's second highest number of people living with HIV/AIDS, saw HIV prevalence decline from 3.7% in 2002 to 1.4% in 2018 among adults aged 15-49 years.

Stakeholders in the country's fight against HIV/AIDS have attributed this development to aggressive prevention and control measures that took HIV/ AIDS awareness and testing to almost every Nigerian. You would be unlikely to encounter any Nigerian these days who didn't know about the country's HIV/AIDS problem, or that there were programmes to address them, Imo State-based HIV/ AIDS advocate Onumara Onyekachi told Africa In Fact.

Armed with the results of the Nigeria HIV/AIDS Indicator and Impact survey, the Nigerian Agency for the Control of HIV/AIDS (NACA) has expressed confidence in the country's ability to meet globally set HIV/AIDS targets. "The size of the epidemic has reduced, but it is not time to relax. Our eyes are fixed on the 2030 target of ending the epidemic," Dr Sani Aliyu, director-general of Nigeria's National Agency for the Control of AIDS, told Africa In Fact.

"Our major external stakeholders understand this and are making greater commitment in terms of budgetary allocation." Aliyu added that efforts to control the disease would have to be intensified to ensure the momentum gained was not lost.

In South Africa, a project that started in 2011 as a three-year public-private partnership to provide health information to new and expectant mothers via their mobile phones has grown to become an effective tool in improving maternal health in South Africa. Rebranded as MomConnect, the service has reached more than two million pregnant women in South Africa, according to South Africa's Department of Health.

"MomConnect is supporting maternal health through the use of cellphone-based technologies integrated into maternal and child health services," a health ministry statement said. "The services are free to the user, and messages are available in all of our 11 official languages.

MomConnect is voluntary and women can opt out at any time." The interactive service supports pregnant women in improving their own health and that of their infants, while allowing feedback on the service received. By using machine learning, the service's help desk is able to assist operators address frequently asked questions. The service has been rolled out on the popular messaging tool WhatsApp, which allows for real-time interaction while keeping messages more secure and affordable.

WhatsApp's builtin location-based services also enable users to see their nearest clinics, thus facilitating quicker access to health care professionals. By early 2018 the service had registered about 63% of its potential target audience - less than two years after it was integrated into the South African national health system. Marcha Bekker, head of business development for mobile technology incubator Praekelt.org, was confident that the m-Health initiative would soon reach all pregnant women in South Africa; it is already available offline at almost all clinics in South Africa.

When this is achieved, South Africa will have a mechanism for registering all pregnancies in the public health system as early as possible. The success of MomConnect is seen as making a case for improving local investments in mobile technologies. This is supported by the continent's rapidly growing mobile and internet penetration rates. In a 2014 report on m-Health opportunities in sub-Saharan Africa, consultancy and research firm Deloitte noted that mobile technology offered Africa an opportunity to quickly close the wide gaps in health and achieve globally set goals, including aspects of SDG 3.

"Mobile penetration rates in many sub-Saharan African countries are rapidly getting close to exceeding 80% and the population is starting to use mobile phones not only as basic communication tools but also to improve and integrate business and services," Deloitte said.

Meanwhile, Ethiopia has become a model for other African countries in improving access to health care and in building an effective health care referral system. Historically, weak infrastructure, a lack of human resources and poor supply chain management systems were among the main reasons why many Ethiopians were unable to access health-care services, especially in rural areas.

In 1993, Ethiopia launched a 20-year Health Sector Development Plan (HSDP), which ran from 1995 to 2015 and led to major reforms across the Ethiopian health system. Spread across four phases, the programme enabled Ethiopia to achieve ambitious improvements in health service delivery. The third phase of the project, which focused on improving mother and child health and addressing communicable diseases, aligned well with the goals that would later be set by SDG 3.

About six out of every 10 SDG indicators cannot be tracked in Africa, according to the UN's 2017 Africa Sustainable Development Report. In particular, the report said that data that was disaggregated by age, gender, income and geographical location would better target support to groups at risk of being left behind in the development process. Some $1 billion would be needed annually to allow 77 of the world's lowest-income countries (mostly in Africa) to establish robust and reliable statistical systems capable of measuring and sustaining the SDGs.

No data is available for nearly 70% of the SDG 3 indicators, prompting the Brookings Institute, a US think tank, to conclude that progress with regard to the SDGs in Africa is "not well underway". Against this, some experts argue that the application of globally applicable SDG targets and measures is counterproductive in Africa, and does not recognise the continent's actual achievements. For example, they say, progress towards reducing child mortality has been faster in Africa than in any other region, with under five mortality reduced by 46% between 2000 and 2015.

But because the continent still has some of the highest rates globally, the progress achieved has been masked. The MDGs generated similar concerns. Within 20 years, Niger and Burkina Faso, two of the world's poorest countries, increased primary school enrolment from 20% to more than 60%, yet both countries were rated as having failed to reach the universal primary education MDG by 2015.

The same feat took the US more than a century to achieve, according to Michael Clemens and Todd Moss, senior research fellows at the US think tank Centre for Global Development, in December 2015. The SDG goals and indicators also classify countries simply as on- or off-track, which other commentators argue fails to take individual country's realities into consideration in a non-linear fashion."For some targets, progress has been faster for countries further from a target; for others it has been slower," says Emma Samman of the Overseas Development Institute, a UK-based think tank.

The application of the same targets to all countries suggests that similar efforts would result in similar gains in different countries, though progress in any one country is rarely linear, and improvements in people's lives across different dimensions occur at varying rates.

Nigeria's infection control efforts are a case in point. The country's Centre for Disease Control (NCDC) has been gradually improving the monitoring of disease in the country, and it is increasingly able to identify cases of diseases that were not previously identifiable. 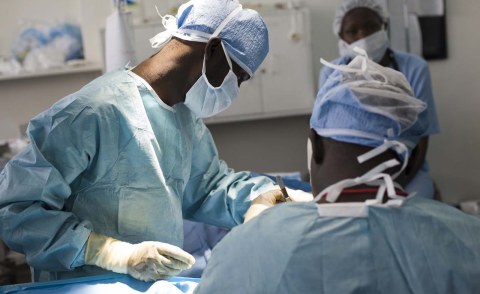 Investigation: 'Hidden' Destinations in Nigeria's Health Budget
Tagged:
Copyright © 2019 Africa In Fact. All rights reserved. Distributed by AllAfrica Global Media (allAfrica.com). To contact the copyright holder directly for corrections — or for permission to republish or make other authorized use of this material, click here.