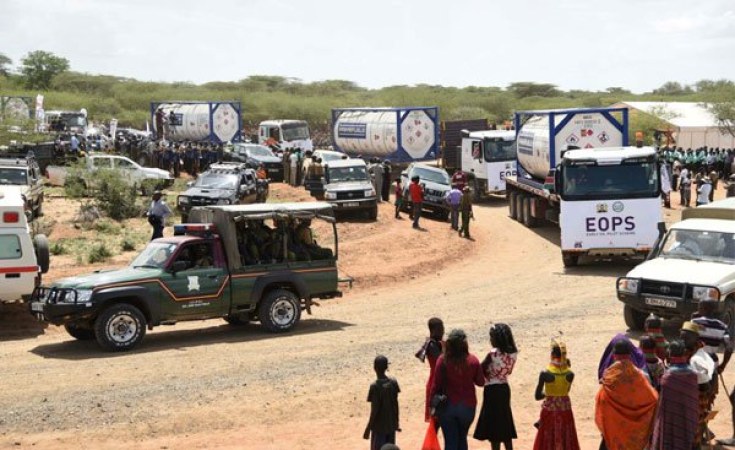 Muloni says investors should bid for the second licensing round for the five highly prospective blocks in the Avivi, Omuka, Turaco, Ngaji. Kasurubani and Turaco and Ngaji.

The ongoing second licensing round was announced in May this year. The qualification process is expected to close by 31st December.

"The entire Albertine basin is de-risked, some of these five blocks neighbor the other development projects (Tilenga and Kingfisher), and the support infrastructure, making them highly lucrative" she said.

Muloni revealed that all of the five blocks have good quality seismic and other data. Uganda according to the Minister is planning to increase the exploitation of country's resources with 90% of the Albertine basin currently unlicensed.

A statement from the Ministry said preliminary exploration work in other basins is also ongoing, and that an oil seep has been encountered by the Ministry's technical teams in the Moroto Kadam basin, providing evidence of a working petroleum system.

The Government and the International Oil Companies (IOCs) are striving to fast track the processes to first oil. "Tullow's planned farm down to raise funds to reinvest in the sector is appreciated. Government has intervened to resolve the standoff, in order to fast track the achievement of the Final Investment Decision by the end of the first quarter of 2020," said Muloni

Uganda together with joint venture partners are working to ensure that the development and production stage of discovered commercial is expedited. The Energy Ministry and the Petroleum Authority say key milestones on the road to first oil have been achieved.

They highlight issues like the establishment of institutional framework, legislation and the conclusion of key the Front End and Engineering Designs (FEED) and the Environment and Social Assessment (ESIA studies).

Muloni is in Cape Town South Africa for the 26th Africa Oil Week conference that has attracted some of Africa's Mineral-rich countries like Ghana, Cote d'Ivoire, the and Democratic Republic of Congo among others.

The Africa Oil Week brings together a wide network of global oil and gas operators, contractors and Governments in Africa. Twenty-five (25) ministers and close to 1500 delegates from over two hundred and fifty (250) countries were in attendance. Uganda National Oil Company's Chief Commercial Officer, Gilbert Kamuntu is also part of Uganda's delegation to Cape Town. He said Uganda's strategy for attracting funding for the oil projects is focused on project financing.

"UNOC on behalf of the Government of Uganda is a shareholder in the Upstream developments and, both the refinery (40%) and the East African Crude Oil Pipeline (15%) projects that have a capital requirement of US$ 3.5 billion each," he said.

Petroleum Authority's Executive Director, Ernest Rubondo said Uganda has realistic local content goals, based on various studies undertaken by the Government and the industry to better understand the capacity within the country.

"The oil and gas sector in Uganda is being managed inline with industry best regulatory practice, which provides for separation of the licensing, regulatory and commercial roles between the Ministry, PAU and the Uganda National Oil Company (UNOC), respectively", Rubondo added.

The government of Uganda in partnership with the private sector has undertaken capacity building initiatives and enterprise enhancements to ensure optimal participation by Ugandans.

1 Cup Of This Will Burn Your Belly Fat Like Crazy!

These 2 Vegetables Can Kill Your Belly Fat Overnight!

Get Accurate Weather Reports Instantly And Maximize Your Fun Time

"The laws are a deliberate effort to build the capacity of the private sector along the entire petroleum value chain." Provision of local content is part of the policies and laws governing the sector. Sixteen opportunities have been ringfenced for Ugandan enterprises.

Peninah Aheebwa, the Director Technical Support Services from the Petroleum Authority of Uganda (PAU) highlighted what the country wants to achieve in terms of local content in the oil and gas sector.

"The government has clearly defined what the value created within the country should be," she said.

The key pillars according to Ahebwa include ; the employment of Ugandans, the use of goods and services locally made or manufactured in Uganda, transfer of knowledge and technology, research and development, and enterprise development. Initiatives like in-country accreditation and certification of Ugandans is ongoing.

She said 700 technicians have so far been trained and certified internationally and 200 government staff have been trained in different technical skills to effectively handle the oil and gas sector.

Together with the private sector, enterprise development is ongoing to enhance the capacity of SMEs to take part in the petroleum value chain.

Meanwhile the Assistant Secretary of United States Department of Energy, Steven Winberg commended Uganda for laying a robust legal and institutional framework to manage the sector before oil production begins.

"African countries such as Uganda have undertaken institutional and Legislative reforms in order to create a favorable investment climate. Uganda has set up an independent regulatory body, the Petroleum Authority of Uganda. Our Government is supporting the US led consortium, the Albertine Graben Refinery Consortium, that plans to construct the largest refinery within the East African Region.," said Steven Winberg in his keynote address at the Africa Oil Week.

Nosizwe Macamo, the chairperson Friburge oil and gas, an indigenous company from Angola commended Uganda for implementing a strategy that focused on building capacity in Government and legislative reforms, prior to oil production.

"Uganda's strategy to first develop local technical capacity in the sector has paid off. Other oil producing countries, especially in Africa are doing this, after they have produced for decades, and have suffered the consequences of weak legal frameworks among other pitfalls. We can learn a lot from Uganda."

So far, Uganda has made twenty-one (21) discoveries, with 88% drilling rate, and six (6) Billion (Bn) barrels of which 1.4Bn barrels are recoverable.

Somalia to Launch First Oil Licensing Round in December

Next Story
Tagged:
Copyright © 2019 The Independent. All rights reserved. Distributed by AllAfrica Global Media (allAfrica.com). To contact the copyright holder directly for corrections — or for permission to republish or make other authorized use of this material, click here.