Ethiopia: Why Ethiopians Are Losing Faith in Abiy's Promises for Peace 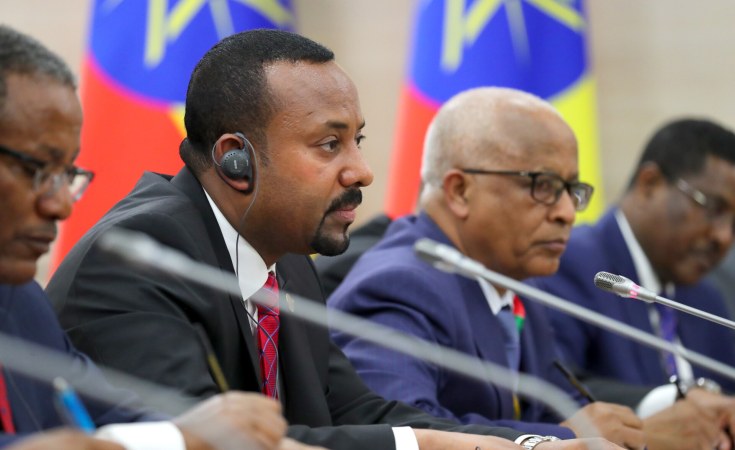 Donat Sorokin/TASS Host Photo Agency
Ethiopia's Prime Minister Abiy Ahmed, second left, during a meeting with Russia's President Vladimir Putin on the sidelines of the 2019 Russia-Africa Summit at the Sirius Park of Science and Art in Sochi, Russia, 23 October 2019.
The Conversation (Johannesburg)
analysis By Yohannes Gedamu

When Prime Minister Abiy Ahmed came to power in 2018, the political reforms and initiatives he promised were met with much hope and optimism. He promised to address Ethiopia's deteriorating ethnic relations, to build national unity, and reignite the stalled democratic process.

And his efforts to end the 20-year conflict with Eritrea won him the 2019 Nobel Peace Prize. Despite this accolade, Abiy's Ethiopia continues to witness recurring incidents of violence within its borders. As a result, the tide of enthusiasm for the premier's reforms is waning. The reforms, from the promise to release political prisoners, to the opening of the media space, now seem distant memories.

The ethnic federal government, which has divided the country along tribal lines, and the legacy of Ethiopia's authoritarian system, are structural challenges that cannot be underestimated. These challenges have not been addressed by Abiy's administration. It is understood that reform takes time, but the premier's flip flopping on some of the issues has caused uneasiness with his leadership. One such issue is the creation of a non-ethnic federation.

His muted response to the rising ethnic violence is worsening peace and security. Today, Ethiopia's ethnic violence is costing thousands of lives and millions have been displaced. The situation is also weakening the country's economy.

To make matters worse, the political leadership within the governing Ethiopian People's Revolutionary Democratic Front (EPRDF) is divided. Over the past few months in particular, the political parties that make up the ruling coalition have been blaming each other for Ethiopia's political dysfunction.

As the wrangling continues, EPRDF's constituent parties from the Oromia, Amhara and Tigray regions are asserting themselves more than ever. Some of the parties are known for advocating the politics of ethno-nationalism which has historically polarised Ethiopia's ethnic federation. Ethno-nationalism is an ideology that defines national identity based on ethnicity.

Today, ethno-nationalists are seizing the opportunity to gain the political upper hand. Abiy's regime's failure to stabilise the nation, and declining public trust in his administration, have given them fresh political momentum.

His position has also been weakened by forces like the Tigray Peoples Liberation Front, the dominant political force in pre-Abiy Ethiopia, which is throwing its support behind the ethno-nationalist movements that are opposed to his leadership.

Abiy seems to be the prisoner of Ethiopia's federal government, the very system that propped him up. This federal system draws its legitimacy from citizens maintaining a strong ethnic identity at the regional level. In light of this the new premier has two options.

One is to actively pursue the unifying agenda that made him popular, which would alienate his ethnic Oromo constituency. The other is to align with the interests of the Oromo ethno-nationalist movement. This would secure the electoral support of his political base in Oromia. But choosing the later could deprive him of the non-Oromo support he has been enjoying.

Indeed, since Abiy was elected the nation has gone down a renewed path of violence. It is not only the Ethiopian people who are divided, it is also the political elites who had previously shown support for Abiy's leadership. Ethiopia's two majority groups - the Amharas and the Oromos - have been particularly critical of the prime minister's perceived inability to address the country's political tumult.

This follows a coup attempt in the Amhara region that left its president Ambachew Mekonnen, the country's military chief-of-staff Seare Mekonnen, and three others dead. The Oromia region has also been the scene of recurrent violence where rallies against Abiy have recently erupted after Oromo activist Jawar Mohammed accused security forces of trying to orchestrate an attack against him.

Abiy has also been criticised for the reemergence of ethnic bias in the federal government's political decision making.

Abiy has so far defended his administration's response to the violence and called on Ethiopians to shun those who try to divide them. However, he has not distanced himself from front-line Oromo ethno-nationalist activists. This has led to the perception there is a pro-Oromo bias in his administration.

There are signs of a burgeoning political dysfunction, from the way in which the administration attempted to resettle internally displaced Ethiopians based on their ethnicity to the complacency in addressing the violence.

Abiy's promise to foster national reconciliation through the new national reconciliation commission seems to be forgotten. The political space that opened up with Abiy's election is closing. And the notorious torture chambers that were closed have been replaced by new jails that operate like the old ones. This throws the promise of a fair justice system into question.

All things considered, it would appear that the EPRDF old guard is an obstacle to Abiy's reform process. It could also be that the new premier is no longer fully committed to the promise of a new Ethiopia. Fortunately for the prime minister a section of the public still has faith that the newly minted Nobel Laureate can deliver on his promises.

But if Abiy doesn't take decisive steps to stabilise the country, chances are high that the Ethiopian state could crumble. To prevent this, the premier must assert the federal government's power to ensure peace and security. He must negotiate with his adversaries and allies on the direction the country is taking, and find a way to tame powerful ethno-nationalist activists. Importantly, unless he genuinely attempts to reinvigorate ties between the parties in the ruling coalition, the country's violent trajectory might not be reversed. 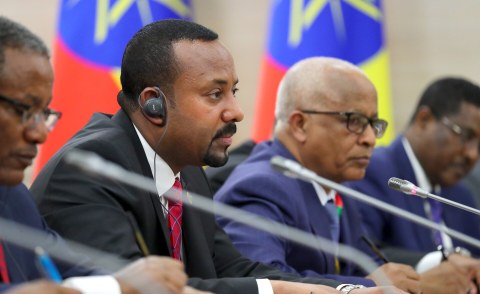 Ethiopian Prime Minister Wins 2019 Nobel Peace Prize
Tagged:
Copyright © 2019 The Conversation. All rights reserved. Distributed by AllAfrica Global Media (allAfrica.com). To contact the copyright holder directly for corrections — or for permission to republish or make other authorized use of this material, click here.