Ethiopia: Sidama to Decide On Statehood 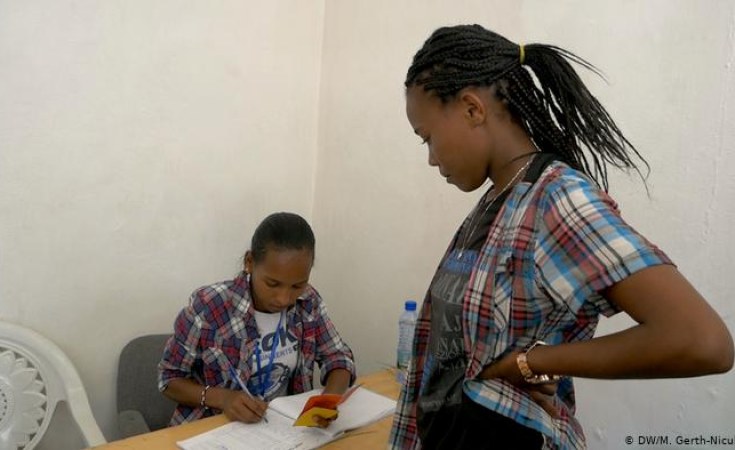 Maria Gerth-Niculescu/Deutsche Welle
First-time voter Mehret Beyeyne registers for a referendum which is to determine if her ethnic group, the Sidamas, will have their own semi-autonomous state in Ethiopia.
The Reporter (Addis Ababa)
By Neamin Ashenafi

The registration of voters for the Sidama referendum started on Thursday November 2, 2019. According to multiple sources from the area, the process is being conducted peacefully and that there were no threats except on a polling station around Hawassa in a place called Bilate on the first day of voter registration.

Chairwoman of the National Electoral Board of Ethiopia (NEBE) Birtukan Mideksa briefed journalists on Thursday stating that the process was guided by the Board. In addition, she said that the problem in Bilate was also addressed on Thursday morning, with the process of voter registration commencing in the afternoon of the same day.

"So far, more than one million voters have registered to take part in the referendum," Desta Ledamo, Administrator of Sidama Zone, Southern Regional State, told The Reporter, adding that the process is being conducted in a peaceful manner.

Tesfaye Romha election officer who is following the process of voter registrations told The Reporter: "People are marching to registration stations eagerly and so far, the process has been peaceful and conducted, according to the direction of the Board without any havoc."

It is to be remembered that following a haggle between the Board and the representatives of the Sidama Zone, the Board decided to organize the referendum, which is expected to take place on Wednesday, November 20, 2019.

According to the information obtained from the board, the referendum will be conducted in 1,692 polling stations, established in 598 kebeles and supervised by 6,000 election officers.

Even though voter registration was behind schedule by one day due to logistics related problems, the chairwoman indicated that after addressing the issues, the registration process commenced smoothly.

Apart from this, the board indicated that the days from November 5 through 10 are allotted for the activities of campaigning by the actors of the referendum.

Meanwhile, Wolaita Committee for Human Rights (WCHR), a human rights advocate organization, has written another letter in opposition to the process on November 6, 2019.

WCHR stated that "With illegal registration of ineligible Sidama voters living inside the Wolayta zone borders, illegal identification authorization of new Hawassa residents; the xenophobic activities of top Sidama officials directly involved in the referendum, are a threat to the process." "Hence it requests the postponement of the referendum and be conducted after the 2020 general election."

Previous Story
In Ethiopia, a Growing Clamour for Ethnic Autonomy
Next Story

In Ethiopia, a Growing Clamour for Ethnic Autonomy

Keeping Ethiopia's Transition On the Rails
Tagged:
Copyright © 2019 The Reporter. All rights reserved. Distributed by AllAfrica Global Media (allAfrica.com). To contact the copyright holder directly for corrections — or for permission to republish or make other authorized use of this material, click here.