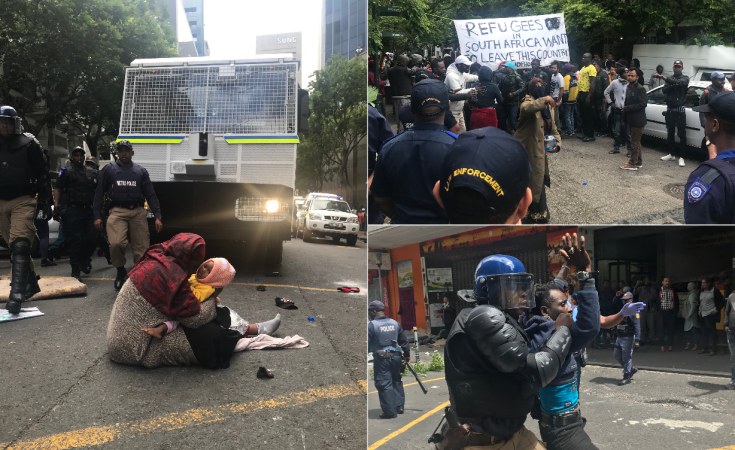 allafrica.com
The scenes of a protest outside the UNHCR's offices in Cape Town by refugees seeking the agency's assistance in leaving South Africa over fears of xenophobic violence. Officers forcefully removed demonstrators with several being arrested.
Daily Maverick (Johannesburg)
analysis By Chelsey Moubray

As the sit-in of hundreds of foreign protesters outside the UNHCR offices in Pretoria enters its second month, the Department of Home Affairs appears to have washed its hands of the issue.

It is not the job of the Department of Home Affairs (DHA) to identify the protesters camped outside the UN refugee agency in Pretoria.

This is according to its latest court papers submitted to the Pretoria High Court as part of litigation aimed at having the protesters removed from living on the pavements outside the agency's office.

Two Pretoria homeowners' associations have instituted court action to compel the relevant authorities to fulfill their statutory duties and legally remove hundreds of refugees who have erected an expansive informal settlement outside the United Nations High Commissioner for Refugees (UNHCR) offices, along the upmarket residential Waterkloof Road in Pretoria.

The sit-in protest began on 7 October 2019 and today more than 500 protesters remain camped outside the UNHCR, pleading to be relocated to a safer country - away from the xenophobic attacks they face in South Africa.

In an affidavit submitted to the high court on Thursday 7 November in the urgent application brought against the City of Tshwane and the...

Alleged Refugee Group Leader Arrested by South African Police
Tagged:
Copyright © 2019 Daily Maverick. All rights reserved. Distributed by AllAfrica Global Media (allAfrica.com). To contact the copyright holder directly for corrections — or for permission to republish or make other authorized use of this material, click here.

Are We Africans Our Own Worst Enemy?
Sustainable Development