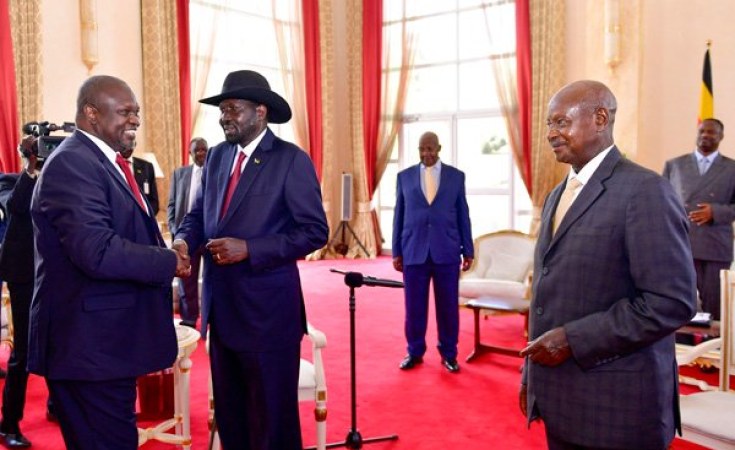 The UN Secretary-General has welcomed the decision to push back the deadline for the formation of a unity Government in South Sudan.

President Salva Kiir and opposition leader Riek Machar were expected to form a unified transitional Government by 12 November, in line with a September 2018 peace deal aimed at ending six years of conflict.

Following a meeting last week in Uganda, held under the auspices of regional body IGAD, the leaders and stakeholders agreed to extend the pre-transitional period by 100 days to allow critical tasks to be completed.

"The Secretary-General urges the parties to use this extension to make further progress on critical benchmarks, including security arrangements and the number and boundaries of states, to allow for the formation of an inclusive transitional government of national unity," his deputy spokesperson, Farhan Haq, said in a statement issued on Monday.

"The Secretary-General also urges the Government of South Sudan to support the process by releasing the pledged amount of $100 million through a transparent and accountable mechanism."

South Sudan is the world's youngest country, having gained independence from Sudan eight years ago. However, the country has been mired in political instability and violence for most of that period.

A delegation from the UN Security Council was in the capital Juba three weeks ago to shore up support for the revitalized peace agreement and to encourage the sides to meet the 12 November deadline.

In light of the latest developments, UN chief António Guterres has reiterated the organization's support for the country: "As IGAD has underscored, face-to-face meetings of the leadership of the parties will continue to be crucial in maintaining momentum," Mr. Haq said in the statement.

"The Secretary-General reaffirms the critical importance of the role of IGAD and the African Union in the political process, and the continued readiness of the United Nations to support their efforts."

Next Story
Tagged:
Copyright © 2019 UN News Service. All rights reserved. Distributed by AllAfrica Global Media (allAfrica.com). To contact the copyright holder directly for corrections — or for permission to republish or make other authorized use of this material, click here.