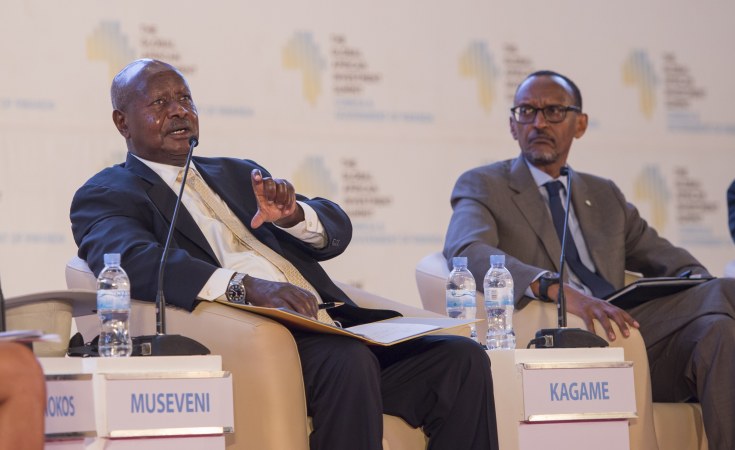 Kampala — Uganda has conveyed to Rwanda her serious concern regarding an incident of murder of her nationals that occurred on Rwandan territory last week.

According to Uganda Government Spokesman Ofwono Opondo, the incident occrued on Sunday, 10th November 2019, at about 05:00 hours, resulting in two Ugandans being shot dead by Rwandan security personnel from Tabagwe, along the Kamwezi border.

"Government of Uganda has today issued a protest to the Government of Rwanda, in regards to shootings by Rwandan Security Personnel that continue to occur along the common shared Uganda-Rwanda border," he said.

The Ugandan protest note to Rwanda stated that, "The Government of Uganda protests in the strongest terms the murder of its nationals by Rwandan security personnel for allegedly being involved in smuggling of goods across the common border. The alleged crime cannot justify the high handed and criminal act by the Rwandan security personnel, against unarmed civilians residing along the common border,"

"Furthermore, the Ministry notes that these murders are inimical to the ongoing efforts to improve relations between the two countries. The Ministry demands that a joint investigation in the murders be conducted and the perpetrators held accountable. "

The Ugandan Foreign Affairs Ministry also raised concern regarding an incident in which a Rwandan national was shot and severely wounded on Rwandan territory, while returning from Uganda territory and was forced to flee back to Uganda.

" On Monday 4th November 2019, at about 1930hrs at Rushaki B Cell, Karujanga Parish, Rubaya Sub-county, Kabale district, a one Peter Havugimana 28 years, resident of Kabaya village (Omudugudu), Gishari Parish (Akagari) Rubaya Sub-county (Omurengye) in Gicumbi District (Akarere), a Rwandan national was received after being shot in the shoulder from about 200 meters in Rwanda, on the border with Uganda," Ofwono stated.

The victim was shot while carrying about ten (10) kilograms of potatoes from Uganda into Rwanda. After the shooting he ran back into Uganda territory for his safety. The victim was rushed to Katuna Police Station and thereafter referred to Katuna Community Clinic for further management. At the Clinic, a bullet was removed from his body and the victim is now in stable condition.

"The Government of Uganda considers the shooting incident a grave matter and that although the latest victim is Rwandan, it constitutes a pattern of reckless and high-handed acts on the part of Rwanda security personnel, against simple, ordinary people that live along the common border. The Government of Uganda is ready to hand Peter Havugimana to the relevant Rwanda Government authorities, if he wishes to return," Ofwono concluded. (read details of the ANGOLA PACT page 2)

Rwanda's President Paul Kagame and Uganda's Yoweri Museveni were once close allies but their relations have turned deeply hostile in a dispute that damaged trade between the east African neighbours.

The pact got off well, with a meeting of security chiefs and foreign ministers in Kigali in September, but a reciprocal meeting planned for Kampala after 30 days is yet to take place. It is now set for November 18, again moved from November 13 as the Angola Foreign Affairs Minister is committed during that time.

In a press briefing in Kigali at the weekend, Kagame complained about the delay, insisting he will only open the border once the issues on the table are resolved.

Soon after in May, Ugandan police accused Rwandan soldiers of entering the country and killing two men.

At the Luanda meeting, the two leaders had agreed to respect each other's sovereignty and that "of the neighbouring countries". They also undertook to "refrain from actions conducive to destabilisation or subversion in the territory of the other party (and) acts such as the financing, training and infiltration of destabilising forces".

The two leaders also agreed to "protect and respect the rights and freedoms" of people "residing or transiting" through their respective countries and to resume cross-border activities "including movement of persons and goods... as soon as possible".

'No destabilisation or subversion'

In the May meeting, Museveni said: "Uganda is fully committed to enforcing this agreement" which is set "to improve the political and economic relations between our countries".

"We have agreed on a raft of issues... largely meant to improve our security, trade and political relations," he said.

Heads of state including Angolan President Joao Lourenco, the Democratic Republic of Congo's Felix Tshisekedi -- who facilitated the talks -- as well as Congo's Denis Sassou Nguesso witnessed the signing in the Angolan capital Luanda.

Lourenco hailed the accord saying it showed the two leaders' "willingness to overcome conflict".

"You are a great example of how our continent should solve our differences, fears, disputes and conflicts... through dialogue," said Lourenco.

Left unresolved, the row between the two leaders would risk dragging in their neighbours, threatening economic integration and regional stability in an already conflict-prone swathe of the continent.

The standoff escalated dramatically in March when Rwanda publicly accused Uganda of abducting its citizens and supporting rebels bent on overthrowing the government.

Apart from a brief interlude in June the frontier has remained mainly shut, damaging the economies of both countries reliant on cross-border trade.

Museveni -- who has admitted meeting, but not endorsing, anti-Kagame rebels -- harbours his own suspicions about his erstwhile ally. His officials have accused Rwandans in Uganda of spying, and some have been detained or deported.

Next Story
Tagged:
Copyright © 2019 The Independent. All rights reserved. Distributed by AllAfrica Global Media (allAfrica.com). To contact the copyright holder directly for corrections — or for permission to republish or make other authorized use of this material, click here.