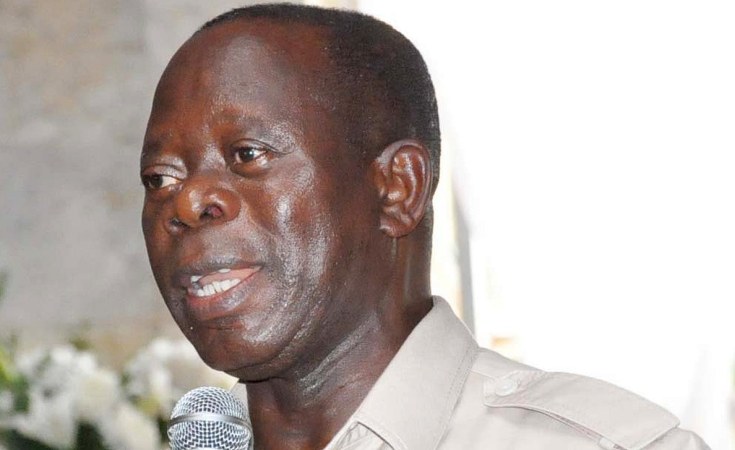 At its grand rally in Yenagoa, Bayelsa State, the All Progressives Congress (APC), has promised to roundly defeat the ruling Peoples Democratic Party (PDP) in the November 16 governorship election.

National Chairman of the party, Adams Oshiomhole, who led several governors, including the Osun State governor, Isiaka Oyetola; Katsina Governor, Aminu Masari; Governor of Kebbi state, Atiku Bagudu, his counterpart in Jigawa, Muhammad Badaru, among other dignitaries, said that despite the huge resources available to Bayelsa, the state had nothing to show for it.

He alleged that Governor Seriake Dickson was in a panic mode, having allegedly failed his people, insisting that David Lyon, the APC standard bearer would bring development to the state.

"Dickson is panicking. How can he not panic when the real lion has arrived. If he's being accused of spending over N100 billon constructing a runway that's less than 3.5 kilometres, then he should panic.

" The governor deserves our sympathy. Let him not complicate his issues by resorting to violence. It will not save him. We believe in one man , one vote.

"To governor Dickson, nobody else matters. Even those who have held more senior national positions that helped him to where he is. He thought that the okro tree could be taller than the person who planted it. On Saturday , he will know the truth" Oshiomhole said. Dickson however insists that he has spent N70 billion on the airport project.

The APC national chairman described Lyon as humble and noted that he is not the noise-making type who will not walk his talk.

" He (Lyon) knows the meaning of poverty. He understands what it means to be focused. Today, I believe the people of Bayelsa should vote for one of their own, who is determined, who mixes with the communities. When you think you are bigger than everyone, democracy is an equaliser" he added.

Oshiomhole argued that the party does not believe in violence , noting that Lyon will be voted in on Saturday.

In his remarks, leader of the party in Bayelsa, Timipre Sylva, who spoke in the same vein as Oshiomhole, accuses the incumbent of mismanaging the huge resources available to the state.

"One of the signs of failure is desperation and if you look around, desperation has set in in the camp of the outgoing government. The APC is stronger than what they can imagine.

"They try to discourage us, but the APC is more powerful than they think. They have mismanaged Bayelsa for eight years. Civil servants will attest to it. Bayelsa cannot pay salaries. How many people are we?

"In Bayelsa, it's darkness everywhere. He (Dickson) claimed that he has built an airport. A few days ago he brought some people to work on the tarmac. What we are saying is that the tarmac is substandard. That's why it has not been approved. Let him land in the airport.

"Instead of flying a plane there, he's bringing people there. He has borrowed everywhere a total of N91 billion and that's just for the airport alone. He's owing several banks" Sylva maintained.

He alleged that the state had received N1.6 trillion since the governor took over in 2012, insisting that the current government has no clue how to run a government.

"David Lyon has not been in government, yet he has touched a number of lives. Degi is an astute administrator. He was councillor, vice chairman, chairman, commissioner. Now he's a senator, yet he has come to rescue our people. With the Lord on our side, we will win" he added.

A number of ex-militants led by Victor Ben (Boyloaf) later endorsed Lyon, saying that he would bring rapid development to the state.

Knives Out for Nigeria Ruling Party's Adams Oshiomhole - Again
Tagged:
Copyright © 2019 This Day. All rights reserved. Distributed by AllAfrica Global Media (allAfrica.com). To contact the copyright holder directly for corrections — or for permission to republish or make other authorized use of this material, click here.