Uganda: Besigye - We Will Not Let Up in the Fight for Change, Democratic Space 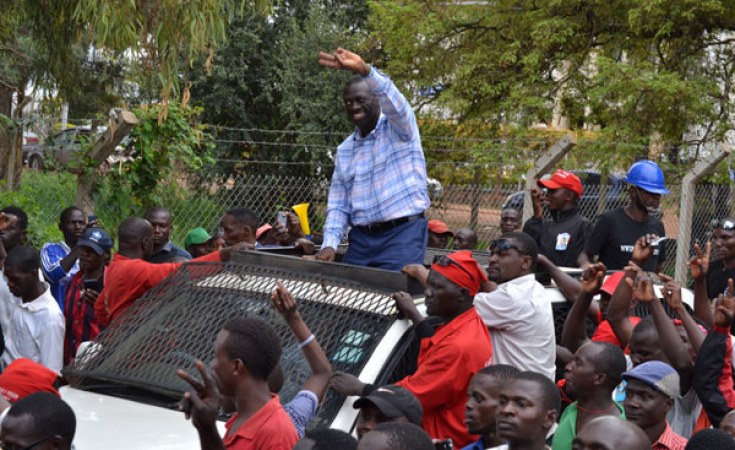 The perennial Uganda presidential contender was arrested on October 28 after yet another violent confrontation with the police on his way to a meeting of Forum for Democratic Change party. He spoke with Julius Barigaba on various issues, including allegations that he has been meeting Rwandan President Paul Kagame.

What is your reading of the current political environment?

We are in a constitutional wilderness, an absence of rule of law and absolute impunity in the management of State affairs. What is critical is that since 1980, no leader has ever handed power to another peacefully. What we are witnessing now, is historical.

I was a member of the National Resistance Army (NRA) which started a war on account of rigged 1980 elections. During the war, we discussed how transition from military to civilian rule should be managed. It is that transition that never happened.

All this time we have been in a struggle to subordinate the guns; we are in the second phase of that struggle.

The first being the struggle against guns held by the British, and the second phase, being guns that came into Ugandans' hands.

What have you learnt in this struggle?

It has shown us to take a different approach--that there are no good guns and no bad guns. What we achieved during the British colonial administration, the NRA war and even now, was against the magnanimity of those that held guns.

If you were in power would you be different to Museveni?

I have been different for a long time. I was among the very first 'rebels' to disagree with Museveni. I parted ways with Museveni ideologically in 1989 and as a result, I was sacked in 1990.

But this is not because I lost direction. It was him who had veered off the transitional plan that we discussed during the war.

Violence has followed you every election cycle. Do you see this changing?

The constitutional wilderness in which we are cannot be removed. That is why we are now telling our people that Article 3 is the only remaining provision of our constitution that puts a duty on all citizens to do everything in their power to return the country to constitutional rule.

We have since 2016 been focused on empowering citizens with what they need to assert their will. That is why about two weeks ago we started a process of calling for a national convention to deliberate on what we need to do to take back our country to constitutional rule.

What is the point of running in an election in this kind of situation?

People have asked me, why I keep participating in elections well aware that they are inherently flawed. The reason is simple. Elections can offer a tactical advantage to those in the elections, for we believe a liberation struggle has three steps.

First, the conscentisation of citizens; Two, a state of having organisational competences in the citizenry. Both of these are the most challenging because those in power know they should not happen. That is why we can't be allowed to hold meetings and why I am pulled out of radio stations, so that information does not reach the people.

The third step is action. At the beginning of 2019, we were convinced we had achieved conscentisation and citizens' organisational competences. So 2019 is the year of action.

How will that action happen when party activities are met with violence?

This [violence] is not unique in struggles of this nature. But once the first two stages have been achieved, it is a matter of time before action happens.

And action will continue until change comes about. It does not mean that on December 31 action stops. We will continue on the path for change because we know the four things used by such regimes.

First, is to use of terror, not so much to injure the leaders as to paralyse the followers.

The second is dispensation of favours to disadvantage and impoverish everyone else.

Propaganda is the other tool, because they control media and use it effectively. It is a huge machinery to paint themselves white and us as evil.

Fourth is to manufacture and sustain those they control, which other people call divide-and-rule.

I am optimistic that in spite of these challenges, all signs show we are approaching a watershed moment.

Is it you or People Power that is more likely to bring about that change?

For instance, I have not declared that I want to contest in 2021. But this is a deliberate campaign tactic.

We are doing our part to present a different contract to our people. That is why we have had engagement with People Power, but we shall also engaged all people at a national convention.

There is talk that on your recent trip outside the country you met President Paul Kagame. What did you discuss?

I did not meet President Kagame, and I have no plans of meeting him. The last time I was in Rwanda was when Gen Fred Rwigyema was being formally interred in 1995.

There is clearly a state of war between Uganda and Rwanda. Museveni has confessed to meeting leaders of armed groups of Rwanda, for whatever reason.

I do not think Rwanda wants to fight Uganda, because fighting Uganda disadvantages Rwanda in every sense. This cat-and-mouse relationship must be viewed from the Rwandan Patriotic Front's formative years when Museveni viewed RPF as just an extension of his power.

As we say in military language, they are now providing covering fire, in saying Besigye is meeting Kagame. But even if I were to meet Kagame, I am not a rebel. I am a legitimate leader. I have every right to meet our regional leaders whether they are from Rwanda, Kenya or any other country.

The East African Community, which Museveni claims to champion, is a co-operation of the EAC citizens not EAC regimes.

Campaign by Uganda's Besigye to Revive His Political Career?

Uganda's Besigye, Bobi Wine Join Forces Against Museveni
Tagged:
Copyright © 2019 The Citizen. All rights reserved. Distributed by AllAfrica Global Media (allAfrica.com). To contact the copyright holder directly for corrections — or for permission to republish or make other authorized use of this material, click here.