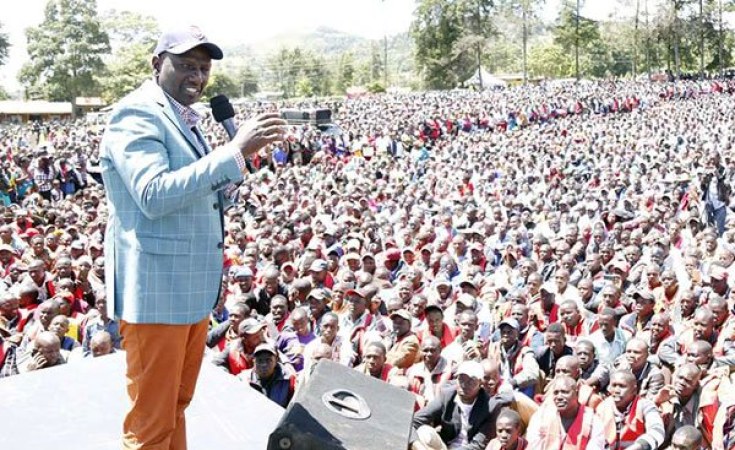 Close associates of Deputy President William Ruto are pushing him to wrest control of the ruling Jubilee Party from President Uhuru Kenyatta, a day after the Head of State hosted politicians from his Mt Kenya political base to quell a simmering rebellion and put his house in order.

They are citing the fact that Mr Kenyatta on Friday chose to have a conversation with leaders from Mt Kenya only instead of hosting a full parliamentary group meeting, and his absence from the campaign trenches of the recent hotly contested Kibra by-election, as proof that the President is no longer interested in Jubilee affairs.

The President has not pronounced himself on the matter, and it is not clear whether DP Ruto has the muscle and authority to topple his boss from the helm of the party without irreparably harming its relevance in the Kenyatta succession debate.

However, the jitters and jostling in the Ruto camp signal an escalation of internal feuding within the ruling party that could force it to implode.

On Saturday, DP Ruto pitched tent in his Rift Valley backyard and dismissed any suggestions that Jubilee was divided. He told perceived rebels to toe the line or leave the party.

The Ruto allies, who include Nandi Governor Stephen Sang and the area Senator Samson Cherargei, argue that for the DP to have a strong bid in the coming presidential poll, he will have to protect the party from ODM leader Raila Odinga's attempts to vanquish it, saying the outfit has national appeal.

Because of that perception of national appeal, the leaders say DP Ruto stands a better chance of succeeding Mr Kenyatta if he vies for the presidency on a Jubilee ticket than if he decamped now to form his own political outfit.

The easiest way out of the quagmire, therefore, is to take over the party and ride on its popularity, they argue.

The scheme is built around the party's constitution and the belief that they have the numbers.

They are, therefore, pushing Mr Ruto to ensure party elections are held early next year so that they can kick out Mr Kenyatta's perceived henchmen from the helm through the ballot.

"Jubilee Party's focus now should be to stop Mr Odinga from breaking it, the way he has done to other ruling parties before. He destroyed Kanu, Narc, Cord and now he is clearly after Jubilee," Mr Cherargei told the Sunday Nation.

The Kieleweke faction of the ruling party supported Mr Okoth, a brother of the late MP Ken Okoth, who ran on an ODM ticket.

Mr Kenyatta gave the by-election a wide berth, leaving DP Ruto to unsuccessfully head the hunt for votes for Mr Mariga in the hostile terrain that is Kibra, described by Mr Odinga as his political bedroom.

Senator Cherargei said DP Ruto must be on the lookout for Mr Odinga's attempts to wreck Jubilee as he strengthens ODM.

He said he was fully behind President Kenyatta and Mr Ruto on many issues of national interest, but noted that they should ensure the party remains strong and maintains its national appeal.

But politicians from Mr Kenyatta's side of the Jubilee equation promised to fight off any attempts to pull the rug from under the President's feet.

Nyeri MP Ngunjiri Wambugu said he and his colleagues from the region are in Jubilee to stay and would not sit back and watch as others take over its management.

"No one is a visitor in this party. I will be going for one of the positions in the upcoming elections," he said, adding that the Jubilee elections will influence the future of the party and its leadership.

"The next party leadership will decide whether it wants to concentrate on a DP Ruto presidency or focus on helping the President to deliver the Big Four agenda," he stated. His sentiments were shared by many others from the Kieleweke camp.

However, Gatundu South MP Moses Kuria fears that the DP might end up inheriting a shell of a party as the crucial Mt Kenya region will likely find a new political home by the time the country goes to the next polls.

"My future is not in Jubilee," said Mr Kuria. "My mind is set that I will not be in Jubilee in 2022. I have no grudge with those whose stake is in Jubilee. I can assure you that Mt Kenya will have its own party."

In one of his fiery tweets since Mr Mariga's loss in the November 7 by-election, the DP, responding to MPs who asked him to resign for undermining the President, deflected the heat to Mr Odinga, who, he said, is only interested in destroying Jubilee.

Eldoret-based political commentator Philip Chebunet said that for the DP to be assured of a strong chance to win in 2022, he should ensure the party remains united and strong.

He said the President appeared no longer interested in its welfare following the truce with Mr Odinga, and that it is upon his deputy to strengthen it.

He said Mr Odinga, who has not declared his 2022 candidacy, could be DP Ruto's main challenger and is already strengthening the foundation and pillars of ODM.

"It is clear that Ruto is the only one interested in the survival of Jubilee Party and he should run away with it," said Mr Chebunet.

"The President appears not interested anymore, so it is upon the DP to fully own it."

But Mr Ruto's opponents in his Rift Valley homeground, led by Tiaty MP William Kamket, said the Kibra by-election was the final nail on the Jubilee Party coffin.

The Kanu MP, a leading critic of the DP and a member of the Kieleweke faction, said the DP is to blame for the disintegration of Jubilee.

"We are telling the Tangatanga team that their leader committed a cardinal sin by invading Kibra in the name of campaigning for his preferred candidate, Mariga. That was the beginning of his political end, and the outcome was a reflection of what will happen to the disgruntled Jubilee Party by 2022," Mr Kamket said.

Baringo Woman Representative Gladwell Cheruiyot, also a Ruto critic, said it is clear that Jubilee is on its deathbed.

"Things are thick in Jubilee and every normal person can see that there is a frosty relationship between the President and his deputy. I don't know much of the party's affairs but it's obvious the duo is not on good terms," said Ms Cheruiyot, elected on a Kanu ticket.

Baringo North MP William Cheptumo, however, poured cold water on the claims, saying that "those peddling lies that Jubilee Party is disgruntled are enemies of the people and development".