South Africa: EFF MP Shown the Door After Saying Gordhan's Appointments Are Based On Race 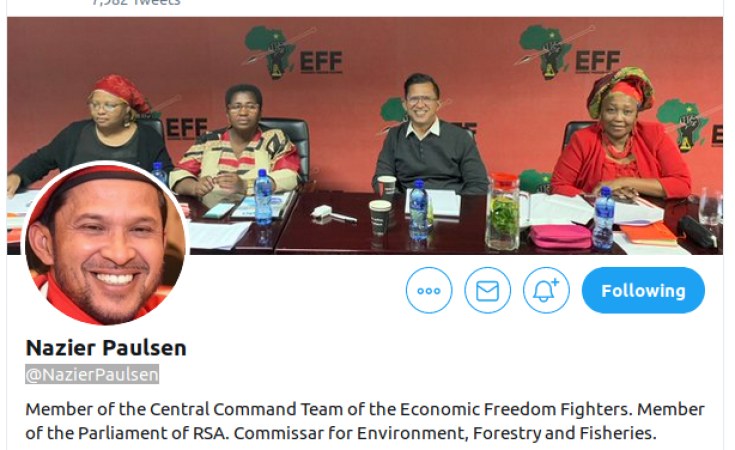 EFF MP Nazier Paulsen was asked to leave the National Assembly on Tuesday evening after he refused to withdraw his statement that Public Enterprises Minister Pravin Gordhan appoints senior staff at state-owned enterprises based on race.

"The minister of public enterprises, Pravin Gordhan, is leading a racist project to undermine and to exclude black people, and Africans in particular, from strategic positions in state-owned companies. The appointment is irrational, shameful, and should be rejected.

"The only reason why this person was appointed could be because he is white and the minister, Pravin, only appoints whites in strategic positions."

"You consistently allow members of that party to make such spurious allegations against the serving minister without following the rules and bringing a motion to the House so that these allegations can be tested," she told House chairperson Madala Ntombela.

Ntombela told Paulsen he had not referred to Gordhan as "honourable" and asked him to withdraw his statement.

"Honourable Gordhan only appoints non-Africans... " Paulsen responded but was cut short by Ntombela who again asked him to withdraw his statement.

"I can't do that, chairperson. He appoints non-Africans and whites in senior positions in state-owned entities."

As Paulsen gathered his belongings, EFF MP Veronica Mente complained to Ntombela about an ANC MP who had yelled at EFF MPs. Paulsen then took another seat.

After Ntombela dismissed Mente's complaint, he noted that Paulsen was still in the House, whereafter a smiling Paulsen left.

Towards the end of last year, as its own financial dealings came under the scrutiny, the EFF launched a campaign against Gordhan.

In June, it left the chamber when Gordhan delivered his speech in the debate on President Cyril Ramaphosa's State of the Nation Address and in July EFF MPs stormed the podium where he was delivering his budget vote speech.

They were physically removed from the room, after which Gordhan continued with his speech, saying what had just happened was the "defence of state capture" and that "we'll survive this fascist populism".

New Eskom CEO Is No Stranger to Turnaround Projects

Will South Africa Use Govt Pensions to Fund Ailing Eskom?
Tagged:
Copyright © 2019 News24Wire. All rights reserved. Distributed by AllAfrica Global Media (allAfrica.com). To contact the copyright holder directly for corrections — or for permission to republish or make other authorized use of this material, click here.