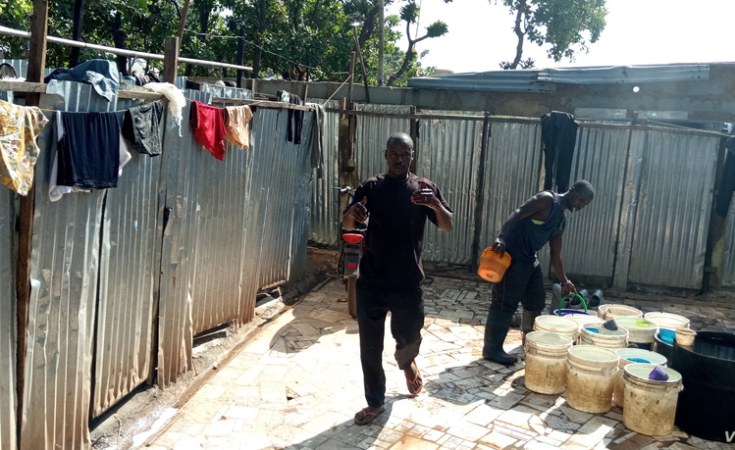 Timothy Obiezu/VOA
Baba Awolu is attends to a man who wants to use his local toilet and washroom facility "Gidan Wanka" in Jahi Abuja, Nov. 18, 2019.
This Day (Lagos)
By Udora Orizu

Abuja — In a bid to end the menace of open defecation in Nigeria by 2025, President Muhammadu Buhari has launched a national programme tagged: 'Clean Nigeria: Use the toilet' campaign.

During the national launch of the campaign in Abuja yesterday, the president noted that the Clean Nigeria campaign is a national transformative programme to mobilise the country towards imbibing the culture of safe and sustainable sanitation.

Buhari, who was represented by Vice President Yemi Osinbajo, stated that the campaign would be backed by an executive order which would give effect to its implementation, adding that citizens must take action to avoid open defecation.

According to him, "There's no need to debate the point that sanitation is a major public health concern, and that poor sanitation adversely impacts all. The launch of the national action plan for the revitalisation of the sector and the declaration of a state of emergency by the president last year was among the many initiatives of the government in addressing the challenges confronting the sector.

"The national action plan is phased into emergency recovery and revitalisation stages. In this emergency phase of the action plan, it's our desire to aggressively mobilise the entire country towards ending the practice of open defecation.

"The target 6.2 of SDG goal seeks to achieve by 2030 access to sanitation and hygiene for all and to end open defecation. The Clean Nigeria: Use the Toilet campaign is part of our efforts to fast-track our progress to ensure that we can achieve this goal by 2025."

Speaking further, Buhari expressed optimism that the campaign would trigger state and local governments to launch their own mass mobilisation of citizens of their states towards the target goal that has been set.

"Although we know that it's the responsibility of state governments to provide water sanitation and hygiene services, the federal government remains committed to supporting the states' initiatives so that we can provide all services to the Nigerian people.

"We must all redouble our efforts and work together in order to meet the country's water supply, sanitation and hygiene needs. As a country, we simply cannot afford the huge cost, including fatalities, caused by preventable water and sanitation-related diseases," he added.

Also the Minister of Water Resources, Suleiman Adamu, and Minister of State for Environment, Sharon Ikeazor, lamented that access to sanitary facilities remains a mirage to majority of Nigerians.

Adamu stressed that the success of the campaign is dependent on strong engagement with states and local governments and other stakeholders to secure the needed political and high-level commitment required to drive it.

Nigeria Is Worst in Africa for Open Defecation - UNICEF
Tagged:
Copyright © 2019 This Day. All rights reserved. Distributed by AllAfrica Global Media (allAfrica.com). To contact the copyright holder directly for corrections — or for permission to republish or make other authorized use of this material, click here.