Rwanda: Children Urged to Contribute to the Fight Against Child Abuse 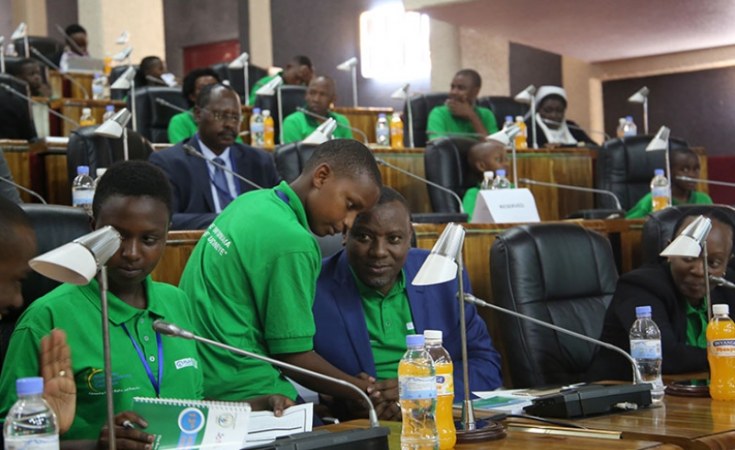 Craish Bahizi/New Times
State Minister for Primary and Secondary Education, Isaac Munyakazi consults with one of the young delegates at the National Children Summit held at parliament.
The New Times (Kigali)
By Ange Iliza

Over 580 children from all parts of Rwanda taking part in the 13th National Children Summit have been urged to positively contribute to the fight against child abuse.

The call was made by Dr Isaac Munyakazi, Minister of State in the Ministry of Education at that took place on Wednesday in Kigali.

Under the theme of "Role of the child in positive parenting", the agenda of the summit prioritized children's rights and finding lasting solutions for child abuse. Participants are children representatives who were democratically elected from local children forums.

The summit also coincided with the World Children’s Day, a day that saw the United Nations adopt the Convention on the Rights of the Child in 1989. Rwanda ratified this convention in 1991.

The key topic of the summit was the exchange of ideas between children and authorities where questions reflected mainly on child abuse, education and ICT-based learning.

Both Dr. Munyakazi and the Minister of Gender and Family Promotion, Solina Nyirahabimana, expressed their commitment to tackling issues that surround children's welfare.

"We promise to encourage all concerned institutions to join the battle against child abuse. Through platforms like this summit, we will be able to attend to children's needs and find solutions collectively," Dr. Munyakazi remarked.

Minister Nyirahabimana told the media that some efforts were put forward but need enforcement.

"We already have solutions in place but we need to collaborate towards them with children taking the lead. We urge them to be aware and report cases of children rights abuse timely."

The summit left 18 resolutions that reflected on questions asked, recommendations, reactions and solutions raised during the summit.

Niyonkuru Pacifique is a 14-year-old schoolboy who is severely impaired came all the way from Nyaruguru district to attend the summit and speak for disabled children. He left the summit with great hopes that his suggestion will be considered.

"I wanted to come and ask people in charge to help disabled children get access to mobility aids. They are too expensive and some can barely afford them without support," Niyonkuru told The New Times.

On the other side, 12-year-old Rugwiro Musoni Brillant, he claimed a gold medal in an international spelling competition in October this year. He sees the national children summit as a place to interact with policymakers on "his bright future."

Both Niyonkuru and Rugwiro sees the summit as a unique platform for children to give reactions and recommendation to better child policies.

The summit was also attended by the Speaker of the Chamber of Deputies, Mukabalisa Donatille who stressed the role of children in assisting parents, guardians and the government in good parenting and strengthening child policy.

Rajat Madhok, Chief of Communication, Advocacy and Partnerships of UNICEF was also present and urged children to use the platform to claim their rights.

"This year's summit has an important theme and I want to encourage you to consider it as demand for your right to loving and responsible care for your parents and caregivers," he said.

The annual National Children's Summit was inaugurated by President Paul Kagame in 2004.