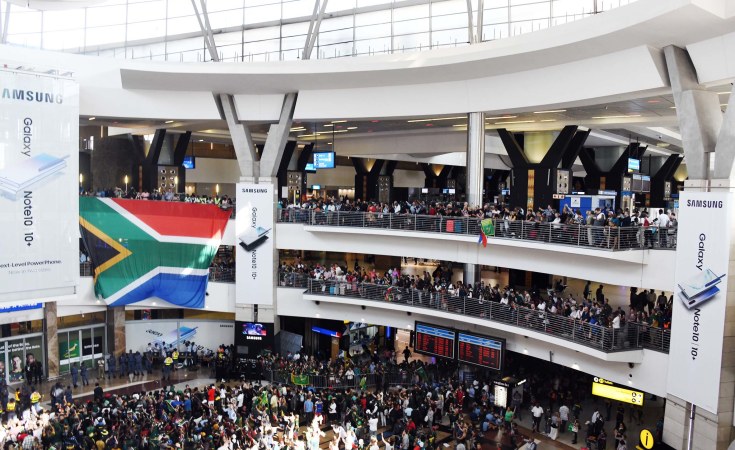 GCIS/Flickr
Fans await the arrival of the Springboks at OR Tambo International Airport on November 5, 2019.
The Conversation Africa (Johannesburg)
analysis By Vasti Roodt

Following the Springboks' recent Rugby World Cup victory, South Africans are once again talking about unity. More accurately: they are arguing about the meaning of unity. In the one camp are those who see the victorious Springbok team as proof that the country's racial divisions are superficial. That, deep down, people are more united than divided.

In the other camp are those who argue that Springbok captain Siya Kolisi lifting the World Cup trophy does not change a thing about the vast racialised inequality that plagues South Africa. In their view, the supposed unity is a sham.

Those in the second camp have come in for a great deal of criticism. Many people, myself included, have been inspired by those glorious 80 minutes on the field and by the cheering crowds welcoming the Springboks home. It seems mean-spirited to treat these feelings of communal celebration as illegitimate.

Nevertheless, the feel-good factor will not persuade those in the second camp to change their minds. After all, they are not denying that people find the World Cup win inspirational. They are denying that these feelings are proof of any deeper social cohesion.

Is there a way out of this seemingly intractable dispute? I think there is.

It starts with acknowledging that political differences among South Africans are real, and that they are often part of a larger network of other values - moral, religious, personal, social - about which they also disagree.

Many of their deepest disagreements stem from the divisions imposed by apartheid, which divided people along racial lines. These persist, despite apartheid having formally ended in 1994. The celebratory feelings in the wake of the Rugby World Cup win are not enough to resolve these differences.

But even if South Africans' racial divisions could be magically erased, people still wouldn't be carbon copies of one another. They would still disagree about many things, both trivial and profound.

Acknowledging the range and depth of their differences can free South Africans from an ideal of unity as perfect agreement about everything they value. It would also rule out the assumption that there is an existing social harmony lurking just below the surface.

Once people have ruled out an impossible ideal of unity, they are free to consider what kind of unity is possible for them to achieve. South Africa's stokvel model is an example of principled unity based on fair cooperation for mutual benefit. A stokvel is a mutual savings and credit association, whose members enter into an agreement to contribute a specified amount of money or goods to the common stock, and are then paid out from time to time in accordance with rules which they had previously agreed upon.

Renowned American philosopher John Rawls' ideas about good and bad reasons for social stability show why the stokvel is a model of unity that is worth emulating.

A society is a cooperative venture in so far as it involves the large-scale exchange of skills, labour, services and goods, subject to laws and regulations.

Unity for the wrong reasons reduces social cooperation to whatever happens to benefit a particular person or group. Under these circumstances, political, economic and social relationships become a zero-sum game in which one group profits at the expense of another. Society is divided into winners and losers, with the latter paying the price for the benefits accruing to the former.

This kind of win-lose cooperation is inherently unstable. People generally do not willingly accept a smaller share of the benefits of cooperation - fewer freedoms and opportunities, less political power, a smaller share of income and wealth, greater legal restrictions - merely so that others can have a larger share.

When we expect others to sacrifice their own interests in service of ours, we treat them as things, mere tools, and not as persons. And any kind of social unity between the users and the used will only last as long as the latter lack the power to overthrow the former.

Unity for the right reasons, on the other hand, is based on principle rather than mere self-interest. The most promising principle here is fairness.

When members of a society believe that no one benefits unfairly from participating in the economy or upholding the law, they have good reasons to keep on cooperating with one another. Fairness is not measured only in terms of the size of each one's share, but also in terms of the rules of the cooperation itself.

In this regard, South Africa can learn a lot from the stokvel model that is already common in the country's black community.

Many South Africans will already be familiar with a model of this kind of fair cooperation:

A well-run stokvel engenders mutual trust. When everyone agrees that the rules of cooperation are fair, they have reason to honour each other's claims when they fall due.

The stokvel offers us an example of a form of unity rooted in fair cooperation, mutual obligation and the commitment to share each other's fate. It is not the superficial unity of multiracial sports teams, irrespective of on-going race-based inequality. But it is also not the narrow unity of racial nationalism or party interest.

This picture of the stokvel is, of course, an idealised version of the real thing. Actual stokvels are likely to be subject to all the usual human failings. However, at its best, the stokvel is an indigenous solution to the problem of fostering social unity among people with different values, needs and interests. In particular, it shows that unity is not something we discover; it is a side-effect of cooperation, and of how we treat one another in the process.

There is no quick fix for the divisions that run through South African society. However, the stokvel model provides a useful starting point for a conversation about the kind of social unity that is worth striving for. This conversation is the first, necessary step in bringing about such unity, in so far as it can be brought about at all.

Vasti Roodt, Vasti Roodt is Associate Professor and Head of the Unit for Social and Political Ethics in the Department of Philosophy, Stellenbosch University