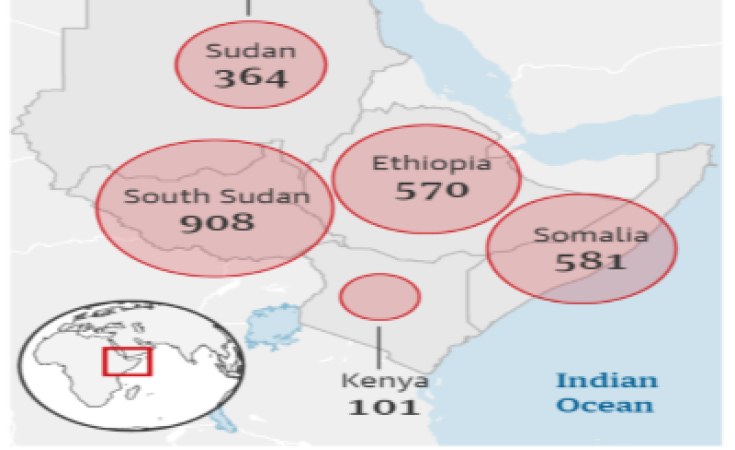 Global heating is "supercharging" an increasingly dangerous climate mechanism in the Indian Ocean that has played a role in disasters this year including   bushfires in Australia   and floods in Africa.

Scientists and humanitarian officials say this year's record   Indian Ocean dipole, as the phenomenon is known, threatens to reappear more regularly and in a more extreme form as sea surface temperatures rise.

Of most concern are years in which the sea surface off the coast of   Africa   warms up, provoking increased rains, while temperatures off Australia fall, leading to drier weather.

It is similar to El Niño and La Niña in the Pacific, which cause sharp changes in weather patterns on both sides of the ocean.

Caroline Ummenhofer, a scientist at Woods Hole Oceanographic Institution in Massachusetts who has been a key figure in efforts to understand the importance of the dipole, said unique factors were at play in the Indian Ocean compared with other tropical regions.

While ocean currents and winds in the Atlantic and Pacific can disperse heating water, the large Asian landmass to the north of the Indian Ocean makes it particularly susceptible to retaining heat. "It's quite different to the tropical Atlantic and tropical Pacific events. There you have you have steady easterly trade winds. In the Indian Ocean that's not the case," Ummenhofer said.

"There is a certain season where you have easterly winds. Otherwise you have seasonally reversing monsoon winds, which makes for very different dynamics."

Recent research suggests ocean heat has risen dramatically over the past decade, leading to the potential for warming water in the Indian Ocean to affect the Indian monsoon, one of the most important climate patterns in the world.

"There has been research suggesting that Indian Ocean dipole events have become more common with the warming in the last 50 years, with climate models suggesting a tendency for such events to become more frequent and becoming stronger," Ummenhofer said.

She said warming appeared to be "supercharging" mechanisms already existing in the background. "The Indian Ocean is particularly sensitive to a warming world. It is the canary in the coalmine seeing big changes before others come to other tropical ocean areas."

Australian climatologists have pointed to this year's dipole as at least one of the contributing factors in the bushfires. Jonathan Pollock, of Australia's Bureau of Meteorology, said this dipole was "up there as one of the strongest" on record.

Gemma Connell, of the UN's Office for the Coordination of Humanitarian Affairs, raised concern over the impact of stronger and more regular Indian Ocean dipole events on Africa.

"What we are seeing from the current record events is large-scale flooding across the region. Entire swathes are under water, affecting 2.5 million people," she said.

"And putting it in the broader picture of the climate crisis, this flooding is coming on the back of two droughts. What we are seeing, and what we are going to see more of, is more frequent climatic shocks coming. And all that is on top of the violence and conflict that has already displaced many of the people involved.

"In Kenya, for example, the region hardest hit has been around Lake Turkana, where there are already global malnutrition rates above 30% following drought. People are trying to cope with back-to-back shocks and their resilience has been eroded."

Another concern for Connell and other humanitarian officials is that although climate scientists are racing to try to develop predictive modelling, there is disagreement over whether stronger Indian Ocean dipole events will lead to a wetter climate for Africa or a drier one.

"As non-meteorologists trying to plan ahead, we're being faced with complex and changing scenarios. We're just running to keep up. Looking now at southern and eastern Africa, with failed rainy seasons and then flooding, none of it looks normal," she said.

"The new normal is a severe weather events. Looking at the Indian Ocean dipole's effects, you have to see this is as a preview of what can be expected in other parts of world. And while I'm not surprised that attention of the world is elsewhere, that is still unforgivable given how many are suffering from a phenomenon the rest of the world helped create."

Tagged:
Copyright © 2019 Guardian Global Development Network. All rights reserved. Distributed by AllAfrica Global Media (allAfrica.com). To contact the copyright holder directly for corrections — or for permission to republish or make other authorized use of this material, click here.