A plane reportedly carrying 19 passengers and crew has crashed into a suburb of Goma in the eastern Democratic Republic of Congo (DRC). It was taking off on a flight to Beni, said regional authorities.

The operator of the twin-engine Dornier-228 aircraft, the local airline Busy Bee, said the flight had on board 17 passengers and two crew members.

The crash site was among residential homes near Goma's international airport.

Fire tenders of Goma city and the UN peacekeeping mission MONUSCO were at the crash scene, said actualite.cd.

In October, a cargo plane operating from Goma bound for Kinshasa crashed an hour after take-off in Congo's central province of Sankuru, killing all eight passengers and crew.

On its catalog of airlines banned from operating in Europe, the European Union lists 21 Congolese airlines, including Busy Bee.

At Least 26 Dead After Plane Crashes in Residential Area 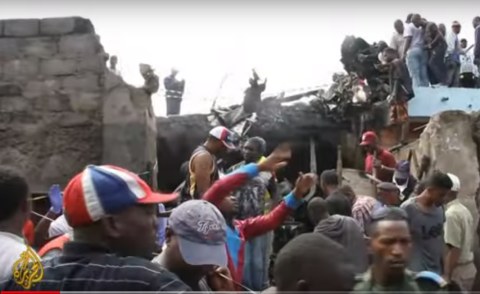 Dozens Dead After Plane Crashes Into DR Congo's Goma
Tagged:
Copyright © 2019 Deutsche Welle. All rights reserved. Distributed by AllAfrica Global Media (allAfrica.com). To contact the copyright holder directly for corrections — or for permission to republish or make other authorized use of this material, click here.