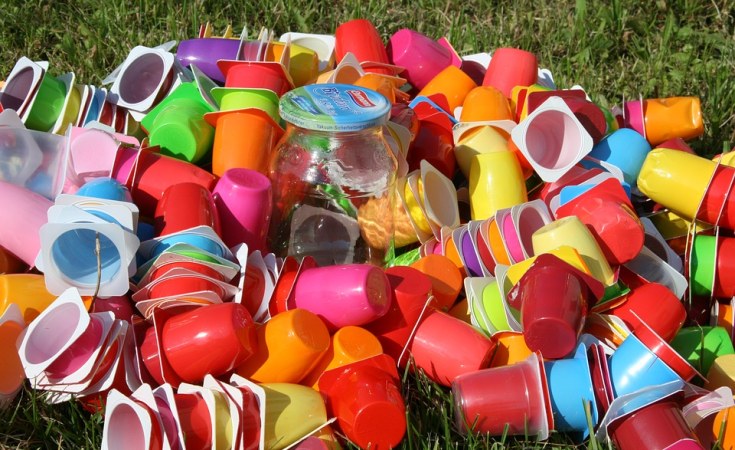 Oceans are home to the most spectacular life. Beneath the blue waters and beyond the beautiful beaches are millions of colourful creatures and vegetation that make our seas and oceans ever so rich in variety. More than three billion people around the globe depend on this marine and coastal biodiversity for their livelihoods - hence the importance of careful management of the water bodies for a sustainable future.

SDG 14, life below water, calls for the conservation and sustainable use of the oceans, seas and marine resources, which cover three quarters of the earth's surface and contain 97% of the our planet's water. SDG 14 aims to prevent and significantly reduce marine pollution of all kinds, especially from land-based activities, including marine debris and nutrient pollution. But one of the biggest threats to our oceans and seas is plastic pollution; according to the United Nations there will be more plastic than fish in the world's oceans by 2050 unless people stop using single-use plastic items such as bags and bottles.

Renowned American oceanographer Sylvia Earle has studied the sea extensively for more than 60 years. She has logged more than 7,000 hours in the deepest oceans, researching and filming marine life since her first dive at the age of 16, and in the 1980s was the first woman chief scientist of the US National Oceanic and Atmospheric Administration. Earle now faces a challenge greater than the round-the-world oceanographic cruise she undertook in 1964 or the 1970 experiment for which she and her all-female crew spent two weeks in an underwater capsule on a coral reef. She is rallying the world to save the seas, which now face the deadliest of threats to their existence - as do the millions of global citizens whose survival depends on them.

From her "bully pulpit", Earle warns that sea life is being destroyed from every direction, by a combination of overfishing, rising temperatures and plastic waste. She notes that since the 1950s, the world has lost 50% of its global coral reefs and 90% of its big fish.

The oceans are choking on plastic junk, millions of tonnes of water bottles, soft-drink bottles, drinking straws and single-use plastic bags. Worse still, what we see floating on the surface accounts for only 5% of all the plastic litter that has been dumped into the sea. According to Ocean Conservancy, a US environmental non-profit organisation, the other 95% is beneath the surface, where it strangles underwater creatures and wrecks aquatic ecosystems. "Oceans are now clogged with plastics, especially discarded fishing gear and single-use plastics," Earle told Africa in Fact.

Today, the world produces 20 times more plastics than it did 40 years ago. That means that more than eight million tonnes of plastic end up in the oceans each year, wreaking havoc on marine wildlife, fisheries, tourism and marine ecosystems. Less than 14% of all plastic is recyclable and, according to a recent report by the Ellen MacArthur Foundation, it is high time someone came up with an innovation or technology to deal with the remaining 86%, which could create $80bn-$120bn in revenue.

The plastic waste that finds its way into earth's oceans and seas will remain there for hundreds of years because plastic does not rot. In fact, plastic is so durable that the US Environmental Protection Agency says, "Every bit of plastic ever made still exists". And once it gets into the water, plastic waste leaches chemicals, many of them toxic.

"Up to 80% of all litter in our oceans is made of plastic, according to UN Environment, the UN agency mandated to protect the environment, and because of its low density, plastic litter is easily transported over long distances from source areas, with ocean undercurrents scattering it to every corner of the globe. According to the US-based Centre for Biological Diversity, there are "15-51 trillion pieces of plastic in the world's oceans - from the equator to the poles, from the Arctic ice sheets to the sea floor".

Emerging research suggests that not one square mile of ocean surface anywhere on earth is free of plastic pollution. Making matters worse, the cosmetics industry adds tiny plastic "micro beads" to hundreds of toiletries, such as body and facial scrubs and even toothpaste. These tiny particles easily pass through water filtration and drainage systems to end up in the sea, where fish and seabirds ingest them. UN Environment warns that about 99% of all seabirds will have ingested plastic by 2050 if nothing is done to reverse the trend.

Africa has not been spared the plastic menace. Even though most of the plastic trash in Africa comes from outside the continent, African cities and coastal towns are grappling with their own mountains of garbage - mostly plastic that ends up in the ocean. Earle cites the islands in the northwest Indian Ocean as the most affected by plastic marine litter in Africa. Plastics in the ocean kill or harm more than 300,000 marine animals every year, she says.

Some creatures get entangled in the plastic debris, while others, such as seabirds, turtles, fish, oysters and mussels, ingest the plastics, which clog their digestive systems, killing them. Fish and birds also mistake smaller plastic particles for food and feed on them in enormous quantities. "When the young birds eventually die, you can literally see small balls of plastic next to their skeletons after the body decomposes," Earle laments.

The plastic menace has become so dire that in February 2017 the UN launched the Clean Seas campaign at the World Ocean Summit in Bali, Indonesia. This was a global effort to convince governments to pass plastic-reduction policies and for industry to minimise plastic packaging and redesign its products. The UN is also urging consumers to change their plastic disposal habits before irreversible damage is done. "It is past time that we tackled the plastic problem that blights our oceans," UN Environment said in a statement at the Clean Seas launch. " Plastic pollution is surfing onto beaches, settling on the ocean floor, and rising through the food chain onto our dinner tables.

We've stood by too long as the problem has gotten worse. It must stop." The campaign announced ambitious measures taken by countries and businesses to ban or tax single-use plastic bags, eliminate micro plastics from personal care products and otherwise dramatically reduce the use of disposable plastic. So far, more than a dozen African countries, including Cameroon, Ethiopia, Gambia, Guinea-Bissau, Malawi, Mali, Mauritania, Rwanda, Sierra Leone, Tanzania and Uganda, have either adopted or proposed bans on polythene bags.

Two years ago, in August 2017, Kenya banned the manufacture and import of all plastic bags (See also Charles Kimani's article on page 96). Prior to the ban, supermarkets alone handed out some 100 million plastic bags every year. More recently, Tanzania's ban on the importation, export, manufacture, sale and use of plastic bags came into effect on June 1. According to UN Environment, the waste plastic items not only kill birds, fish and other animals that mistake them for food but they also damage agricultural land, pollute tourist sites and provide an ideal breeding ground for the mosquitoes that carry malaria and dengue fever.

"Are our oceans dead? I would say they are not dead yet, but they are in deep trouble," says Earle. "Plastic marine litter knows no boundaries and can wash up on any shore, including those of uninhabited islands. It is a global problem requiring global action." Earle believes governments should pass laws that discourage the use of single-use plastic such as the bags, cups, bottles and microplastics that are used in millions of items every year. Government or regulatory incentives for citizens who make choices that limit their use of plastics, by using cloth or sisal bags for shopping, for example, are needed.

Big corporations have joined the global effort to turn the tide of marine litter. Dell, a technology company, has announced that it has started using recycled plastic fished out of the sea for its product packaging. More announcements and pledges by countries and organisations were made at The Ocean Conference held at the UN headquarters in New York in June 2017, which brought together governments, UN agencies, financial institutions, NGOs, civil society, academia, scientists, the private sector and other actors to assess challenges and opportunities relating to, as well as actions taken towards the implementation of, SDG 14: life below water.

At the individual level, choosing reusable shopping bags, cups, straws and water bottles, and saying no to personal care products that contain microplastics and plastic packaging can go a long way towards curbing the plastic menace. When it comes to plastics, no action is too small to make a difference.

Tagged:
Copyright © 2019 Africa In Fact. All rights reserved. Distributed by AllAfrica Global Media (allAfrica.com). To contact the copyright holder directly for corrections — or for permission to republish or make other authorized use of this material, click here.