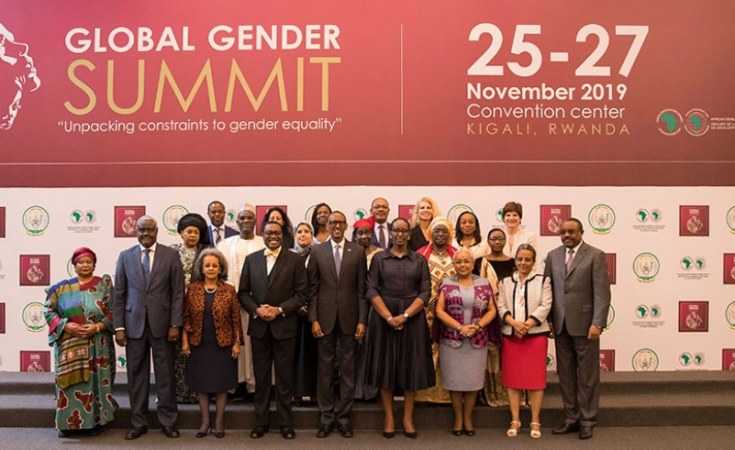 Photo: Village Urugwiro/New Times
Some of the high-profile delegates at the Global Gender Summit with President Paul Kagame and First Lady Jeannette Kagame in a group photo.
The New Times (Kigali)
By Julius Bizimungu

President Paul Kagame on Monday told participants from different parts of Africa that promoting gender equality on the continent is simply common sense.

He was addressing leaders from public and private sector as well as civil society and academia who are meeting in Kigali for the Global Gender Summit, the first of its kind to take place in Africa.

"Women are our mothers, sisters, wives and daughters. Whenever women gain, everybody gains and nobody loses," he told more than 1,000 participants at the Kigali Convention Centre.

"The fight for gender equality is common sense," he added, reminding the delegates that the opening of the Global Gender Summit marked the start of the annual Sixteen Days of Activism campaign and urging people to make it count.

The Head of State indicated that everyone should be concerned about gender equality, although women gave it more value than men.

Kagame said it was past time for men to become much more conscious of gender so that women can afford to enjoy the same freedom.

The summit, organised by the African Development Bank (AfDB), is aimed at facilitating the sharing of best practices and catalyse investment to accelerate progress in gender equality and women's empowerment in Africa.

Currently, in Africa, women-led businesses face a staggering $42 billion financing gap and 70 per cent of women are financially excluded, according to the AfDB.

A study by McKinsey shows that equal and full participation of women can add an additional $28 trillion to the global wealth by 2025, a 26 per cent rise in the world's Gross Domestic Product (GDP), annually.

At the summit, AfDB unveiled an initiative dubbed Affirmative Finance Action for Women in Africa (AFAWA) Risk Sharing Facility, which they say seeks to accelerate growth and employment creation across African economies, by closing the financing gap for women.

Over the next five years, AFAWA is expected to unlock $3 billion in private sector financing to empower female entrepreneurs through capacity-building, access to finance as well as policy, legal and regulatory reforms to support enterprises led by women.

Speaking at the launch of AFAWA Risk Sharing Facility, Minister Ndagijimana pledged $1 million to the fund on behalf of Rwanda.

During the panel discussion, President Kagame shared Rwanda's experience, noting that the work progress in narrowing the gender gap was largely driven by the change in mindset.

" The change of mindset has elevated women to the level they need to be, they are there by their own efforts as well as the country, men and women, making this effort together," Kagame said.

However, he stated that while progress has been made in empowering women and their health, education, business and entrepreneurship, there was still a lot of work to do.

"The gender parity has not been achieved by any country in the world," he said, adding that addressing gender gaps should be everyone's responsibility.

President Sahle-Work Zwede of Ethiopia, who is currently the only female President in Africa, echoed Kagame's remarks Zwede adding that the gap remains to be filled.

"We have to have women fill these middle-level leadership positions as well and women grow along the ladder. We need to have educated, skilled women that could replace those who have been pioneers in this area," she said.

"It's time to move from rhetoric to actions,"she added.

AfDB President Adesina was blunt in his remarks, particularly blaming men for the slow pace of progress in achieving gender parity - which is the reason the Bank decided to bring the conversation to Africa and put in place a different initiative that supports women.

Adesina said it was not smart to see women having limited access to opportunities, despite dominating fields like agriculture.

"Men have to realize that the current problem was not created by women, it is us. We have to make sure that we address long term injustices and inequalities that have been perpetrated for so long," he noted.

To Achieve New Impetus Towards Gender Parity, All Stakeholders Need to Act in Five Priority Areas

16 Days of Activism is Over, But What's Changed for Women?
Tagged:
Copyright © 2019 The New Times. All rights reserved. Distributed by AllAfrica Global Media (allAfrica.com). To contact the copyright holder directly for corrections — or for permission to republish or make other authorized use of this material, click here.