Kenya: Govt Urges People in Landslide and Floods-Prone Areas to Move Out 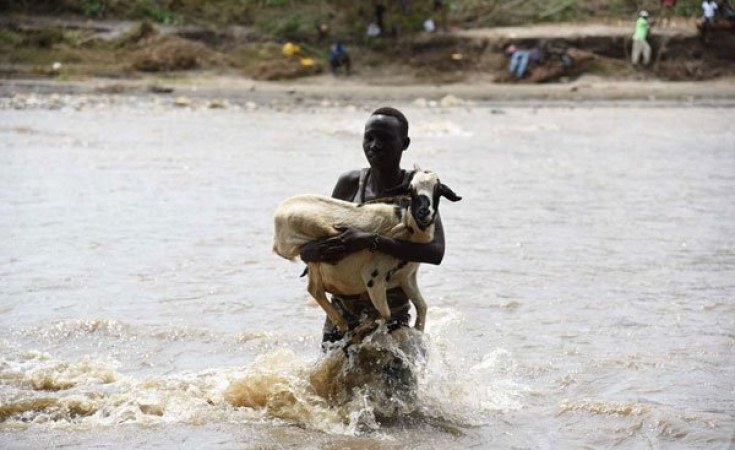 Nairobi — The Government has urged people living in floods and landslide-prone areas to move to safer grounds, in the wake of the West Pokot disaster that has claimed more than 50 lives.

Interior Cabinet Secretary Fred Matiangi on Monday cautioned residents in Muranga, Taita Taveta, sections of Nyeri, Nyando in Kisumu and Machakos Counties to take precautions due to the heavy rains pounding the country.

He was speaking at the Wilson Airport after an aborted trip to Kapenguria, where he was scheduled to meet West Pokot leaders and victims of the Saturday tragedy.

"They should move even if it is in Primary schools, we are ready to accommodate and help them," the CS said.

"We have been wanting to go to West Pokot since Saturday. The safest and quickest means was flying there," he said.

The team which was aboard two choppers, one belonging to the Kenya Police and another to the military, were forced to land in Eldoret airport.

"We have been forced to land here, so we will have to wait a bit to see whether it will clear and whether we will be advised to fly to Kapenguria," the CS earlier said at a press briefing in the airport.

Deputy President William Ruto, however, made it to Kapenguria in the company of other leaders, where he visited hundreds of victims currently receiving treatment at the District hospital.

"I assure you that the government is doing everything possible to support you during this difficult time," Ruto said, when he visited victims of the tragedy at the Kapenguria Hospital before he headed into the villages where he addressed affected families displaced by the tragedy after their houses were was away by floods or destroyed by the landslide.

At the Wilson Airport, Matiangi said the Government had dispatched relief supplies to the affected areas.

"I know that because the roads are too difficult to navigate at this time, some of the foods and items like blankets will be late to arrive," he pointed out.

Mutyambai said police were working alongside other agencies to ensure the more than 100,000 people directly affected by the floods and the landslides are moved to safer grounds.

Earlier Monday, West Pokot Governor John Lonyangapuo appealed to the national government to deploy a chopper to the region to help transport bodies.

"The challenge we are facing here is transportation because bridges have been cut off, we need the government to station a chopper here," he told reporters.

"The number of people confirmed dead now is 52," he said, "there are other bodies that are yet to be transported from the villages."

The Kenya Meteorological Department has warned of heavy rain throughout the week, with up to 30mm raising fears of more devastating effects in various parts of the country.

Regions likely to be affected include Western, South Eastern, Northwestern, Northeastern and central regions including Nairobi.