Africa: Why Africans Were Shocked By the Pictures From Sochi 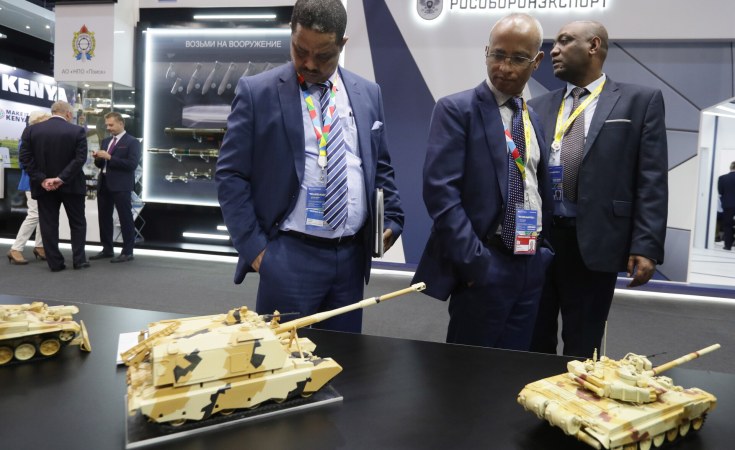 On a continent desperate to ‘silence the guns’, images of officials admiring new weapons raise many questions.

Scenes of African officials in Russia testing and gazing at sophisticated weapons, with visible exhilaration, circulated online during the Russia-Africa Summit in Sochi on 23 and 24 October. Countries have the sovereign right to buy arms for national defence purposes, but the pictures nevertheless raise concerns.

What are the implications of bringing more arms to a continent already awash with weapons and caught in the grip of armed violence and instability in many of its regions? And considering that Africa is trying to ‘silence the guns’ by 2020, the Sochi images bring into question Africa’s priorities. Should arms sales play such an important part in Africa’s relations with Russia and its other global partners?

Clearly there’s a need for greater continental action when it comes to arms control and management. Transparency in the decision-making process on military expenditure is also required, particularly the process through which national governments decide to purchase weapons.

Historically, the so-called military-industrial complex – military contractors and lobbyists said to be perpetuating conflict – consolidated in the late 20th century in the United States (US) and the West more generally. It has since supplied arms the world over, legally and illegally. In 1961 US president Dwight Eisenhower warned of the increasing power of the military-industrial complex and said it was escaping the government and the public’s control. Since then Russia, China and other smaller countries have joined the list of advanced arms producers.

The weapons industry is big business. According to the Stockholm International Peace Research Institute (SIPRI), global military expenditure in 2018 was estimated at US$1 822 billion, with the US accounting for 60% (US$649 billion) of this, followed by China, Saudi Arabia, India and France. Military expenditure in Africa stood at around US$40.2 billion in 2018.

These figures – and the number of arms in circulation – may be grossly understated, given the prominence of arms trafficking in Africa, which also feeds global and regional criminal networks. This spending on arms contrasts with persistent poverty and fragility in many countries on the continent, coupled with expanding human security challenges.

This is exacerbated by the dominant ‘securitism’ paradigm, which approaches security from a purely militaristic or police perspective, leading to ill-adapted responses to Africa’s main challenges. From 2014 to 2018 the continent’s top arms suppliers included Russia, China, Ukraine, Germany and France, while the biggest recipients or buyers of arms in Africa were Egypt, Algeria and Morocco, the SIPRI study says.

While most weapons in Africa are imported, 22 countries manufacture small arms and light weapons. These include some current members of the African Union Peace and Security Council – Algeria, Angola, Kenya, Morocco, Nigeria and Zimbabwe. Artisanal production of arms is also prevalent in Africa, with those weapons reported to fuel criminality in many countries.

The proliferation of small arms and light weapons is an important contributing factor to conflict in Africa. An Oxfam study reveals an estimated 100 million uncontrolled small arms and light weapons in circulation on the continent, mainly concentrated in crisis and fragile areas. These weapons fuel conflict and cause countries to remain trapped in a cycle of armed violence.

Meanwhile the manufacturing of military equipment in Africa is not always done by local companies. Examples include South African companies manufacturing arms in Kenya, a Russian company in Egypt, and a German and an Emirati company in Algeria.

The question of oversight and transparency in the management of armed and security forces also arises. This includes for example strategic decisions on the merits of what appears to be the continuous and never-ending purchase of armaments or the often disproportionate budgets allocated to the defence sector in several African countries.

Linked to that is the question of the management of national arms stocks, which run the risk of being diverted and ending up in the hands of armed groups or bandits. These criminals already benefit from arms trafficking, and at times from the misplacement of peacekeeping missions’ arms stocks.

The other category of actors escaping public oversight is foreign military bases and soldiers on the continent. Their presence and the nature of their activities are difficult to track. Often security sector reform policies aimed at democratising institutions are poorly implemented, if at all, and fail to address the issue of oversight. The lack of democratic oversight of the security sector is linked to the general lack of transparent governance in many countries.

This all largely explains the strong reactions to the sight of African officials admiring Russian arms. The continent is facing enormous socio-economic challenges that the procurement of more arms won’t resolve.

It is easier for Africa to manage the legal purchase of arms than their illegal trafficking and flows on the continent. States can administer the purchase of legal small arms and light weapons without compromising their national military security priorities. This begins with assessing the actual need for additional purchases, which obviously entails democratising the management of security institutions.

Africa could also benefit from a continental moratorium similar to the Economic Community of West African States Moratorium on the Importation, Exportation and Manufacture of Light Weapons. This could serve as a model for similar initiatives on a continental level.

This article was   first published   by the ISS  PSC Report .