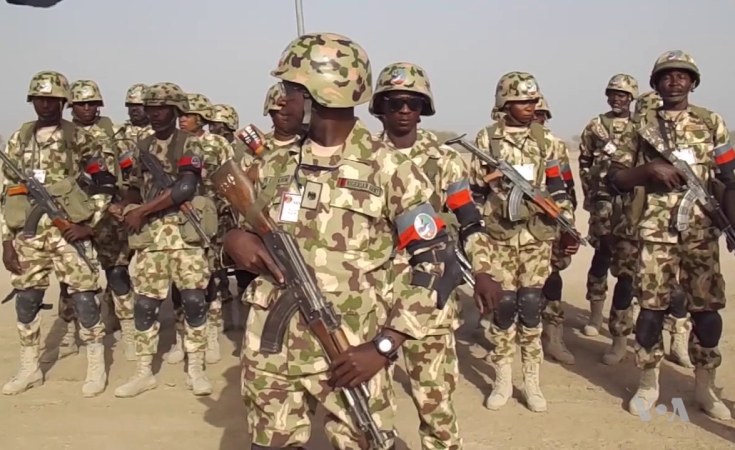 The Nigerian military has freed 983 persons it arrested and detained for alleged complicity with Boko Haram activities. It also handed them over to the Borno State Government.

The suspects had been in a military detention centre in Maiduguri until Wednesday when they were asked to go home after months of interrogation.

Some of them said they were held in the detention centre for over three years.

The Theatre Commander of Operation Lafiya Dole, a counterinsurgency force in the northeast state, Olusegun Adeniyi, said the suspects, who include five females, were taken into custody following strong allegations that they were accomplices or aiding and abetting Boko Haram.

"The world is over-armed and peace is underfunded; therefore the first step towards peace in any theatre is to replace the widespread culture of war with the culture of peace, " Mr Adeniyi, a major-general, said.

He said the handing over of the 983 former suspects was not only significant to the people and government of Borno state but is also a milestone in the armed forces' resolve to uphold its constitutional duty.

"Several arrests have been made during various offensive and defensive operations conducted over the years.

"During the period, we have captured confirmed and surrendered Boko Haram terrorists and their sympathisers among which were the 983 freed suspects being handed over to the Borno state government today."

Mr Adeniyi said the 983 had been screened and cleared by the joint investigation board.

"Today I present to His Excellency Governor of Borno state, a total of 983 investigated and cleared Boko Haram terrorists and their sympathizers in our detention facilities for their rehabilitation and integration with their family.

"The males among them are 978 while the females are five in number - which makes a total of 983."

Mr Adeniyi reassured the government and people of the state that the armed forces will not intimidate, harass or coerce any person "unjustly."

"The intent (of the mass arrest) has been demonstrated in today's ceremony."

He said more suspects are still in custody and promised that they too would undergo similar vetting procedures and if absolved "they would surely be released and reunited with their families."

The theatre commander pleaded with the state government to assist the released detainees to have proper reintegration.

Governor of Borno state, Babagana Zulum, who received the released persons, thanked the military for freeing them.

"We remain eternally grateful for all you have been doing for us and we pray for Allah to crown your efforts with a lasting peace in Borno and the northeast region."

He said freeing the 983 former suspects would be a significant stepping stone towards ending the Boko Haram insurgency.

"This signals the beginning of peace in Borno State. It is very important for the people of Borno State to note that the Nigeria military is not happy about detaining innocent civilians in Borno or anywhere in Nigeria."

Governor Zulum implored the commander and his officers to continue the screening exercise iso that innocent suspects could be released.

He said the suspects would be taken over by the government through the ministry of women affairs which will be coordinating their rehabilitation that would last a month.

The governor said some members of Boko Haram that recently surrendered were undergoing de-radicalization and rehabilitation at the Safe Corridor Initiative facility in Gombe town.

He said the government of the state was planning the reintegration of the surrendered insurgents.

"To those that have not surrendered their arms and given up their struggle, we want to assure you that the government is ready to dialogue with a view to settling the matter out of the war, " he said.

"The non-kinetic approach to ending the war is also very important."

He said his administration prioritised dialogue with all armed group willing to come out of the jungle to talk.

Ahmadu Jidda, a 48 years old trader, said he had been detained since 2016.

"I was arrested in Adamawa state by soldiers who accused me that I was a Boko Haram," he said. "Since then, I have not spoken to my wife and family and it is over three years now. Thank God they'd checked us and eventually found me and others innocent of the allegations.

"We were not tortured; we were well fed, even though it took over three years for me to regain my freedom."

Modu Usman said he was arrested and detained 38 months ago.

"I am from Kukawa local government where I was arrested and detained under false accusations. I thank God I survived it and am happy that at last I am being freed to go home. "

One of the five freed female detainees, Falmata, said she was arrested about a year ago in Kano. She said some persons lied against her that she was a Boko Haram accomplice.

"I really do not know why such falsehood was meted upon me but God has proven my innocence, " said the 24 years old spinster.

Another female, Yakaka Ibrahim, who was suckling a baby boy, Ba'akura, does not speak Hausa except her native Kanuri.

Speaking through an interpreter, the woman who is in her late 20s said she is from Konduga town of Borno where she was arrested some months ago.

Bukar Bukar, a freed male suspect said he was arrested at his hometown, Damboa.

"False accusation brought me here but thank God, after many months of investigation, I am now cleared. I was never a Boko Haram and will not be by the grace of God."

Most of the abductees were not allowed to speak with journalists as soldiers insisted that no close-up photograph should be taken of them.

Mr Adeniyi had urged them to "go home and sin no more,", a remark that seemed to have contradicted the earlier position that they were only "suspected but cleared Boko Haram members."