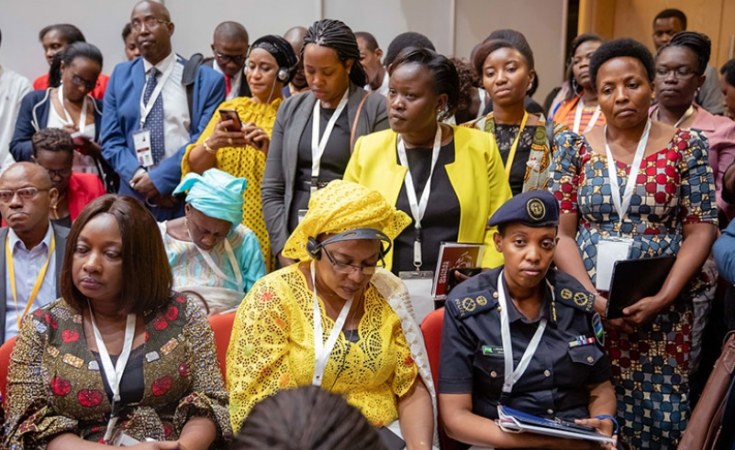 Emmanuel Kwizera/New Times
Participants at the Global Gender Summit in Kigali on November 26, 2019.
The New Times (Kigali)
By Julius Bizimungu

Women have been identified as the most victims of different violent conflicts across the African continent, a study by the African Peer Review Mechanism (APRM), has shown.

APRM, an organ of the African Union which promotes good governance, has said the proliferation of cross-border movement in arms and narcotics and violent extremism have fuelled conflicts.

According to the study, which was unveiled on the sidelines of the Global Gender Summit, 55 per cent of global conflicts existed in Africa in 2002, but the rate fell to 24 per cent by 2011.

By November 2017, there were 15 conflict situations in Africa, all exhibiting the crime of trafficking in women.

APRM indicated that violent conflict is the most immediate trigger for forced displacement, resulting in high number of internally displaced women.

"Conflict has adverse implications of men and women, but there is demonstrable evidence that it affects women and girls disproportionately," Laura Nyirinkindi, a lead consultant of the study says.

Some of the grave challenges she points to include displacement, loss of homes and property, family disintegration and sexual violence.

Forced displacement in particular has created a humanitarian crisis in different ways, resulting in a vast number of refugees and internally displaced persons.

The study shows that by the end of 2018, Africa hosted the highest number of both women and children refugees (52 per cent and 57 per cent, respectively).

It attributes the grave situation particularly to the fact that decision-making in governance and formal peace processes are male-led and dominated.

According to Nyirinkindi, when qualifications for participation in peace negotiations and mediations are characterised by military, defence and diplomatic experience, women are treated as ineligible.

"The well-developed skills that women in peace-building have built in communication, networking and mediation are discounted as soft skills," she notes.

Yet, a United Nations Security Council Resolution 1325 on women, peace, and security found that in a 40 case study, the strong presence and participation of women in peace processes produced positive results for negotiations and consensus building.

A 2019 study in 30 African countries found that gender equality can reduce the probability of electoral violence in Africa by around 4.2 per cent.

Despite that, it is estimated that out of 1,168 peace agreements signed between 1990 and January 2014 globally, only 18 per cent made any references to women or gender.

Indeed, Nyuon Susan Sebit, Head of National Alliance of Women Lawyers in South Sudan says her country has been at the core of conflicts but that women have not been part of the peace process.

According to Sebit, when South Sudanese started peace negotiations in 2015 after the conflicts broke out, it was difficult for women like her.

"There was no gender lens at the time," she recalls.

The latest agreement, however, there is a likelihood of applicability because women have been on the peace negotiating table, she adds.

"When women are on the negotiation table, they don't talk about women only but they talk about the whole population," she argues.

Sebit emphasises that victims of conflicts should access justice since they are dominantly the victims.

"This is why we have taken that task on," she says, adding that her organisation currently provides women and children with pro-bono services.

Stella Mystica Sabiti, the UN Advisor to the AU Network of Women in Conflict Prevention and Mediation, says there is a need to make peace and security "the issue of life and death" because she believes that's the only way Africa can make headway.

Women need to stand up, but Sabiti notes that it is not a walk in the park rather it requires strength.

For Fatimata Maiga, the Chairperson of the Association of Women for Peace Initiatives in Mali, women have to "push doors, knock on doors" especially during peace negotiations.

EAC Moving At a Snail's Pace