Africa: Why We're Involved in a Project in Africa to Promote Edible Insects 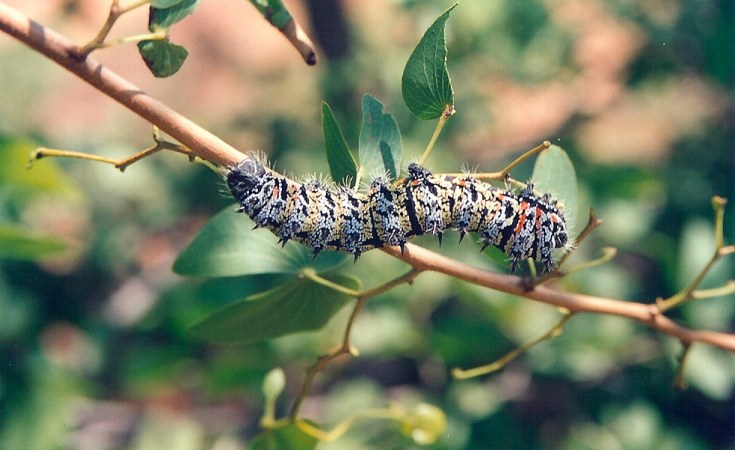 Photo: JackyR/Wikimedia Commons
A mopane worm (phane or Gonimbrasia belina) on a mopane tree (Colophospermum mopane) in Palapye, Botswana in 1995. Phane are actually caterpillars: this one is about 10 cm long and the head is to the right.
The Conversation (Johannesburg)
analysis By Robert Musundire

There is a wealth of indigenous knowledge about capturing and eating insects in sub-Saharan Africa. But the development of edible insects as a food industry has been very slow, despite its many potential benefits.

Sustainability is one. Insects have a small carbon and water footprint. Studies show that insect farming emits less carbon and methane gas than large livestock like cattle and pigs. Much less water is needed to produce the same amount of protein. Insects use feed more efficiently than other sources of animal protein. Farming them could be a new source of jobs and income.

There should be more awareness and promotion of insects as food for humans and as feed for animals, especially at the policy, legislative and business level. In most African nations, edible insects are still viewed as an insignificant source of food and even, in some instances, as food for the poor. There are very few success stories of large-scale insect farming and industrial use in Africa.

We have been involved in a project to promote the integrated use of insects as food in urban areas in Zimbabwe and the Democratic Republic of Congo. Our project works on the edible insect value chain and discovered that the seasonal supply of insects and poor hygiene standards made the market unstable and unattractive to consumers. Traders sold insects in an informal setting and had little interaction with farmers.

We carried out training among farmers, traders, municipalities and others with an interest in this emerging industry. The training included how to handle and process insects after they were harvested, food safety along the value chain and farming crickets (Acheta domesticus and Gryllus bumaculatus).

The trainees have learnt how to rear and sell insects better and have become more aware of what a sustainable value chain should look like. For example, market facilities have to be clean and there must be a steady supply of insects. The training also created awareness of the need to farm insects rather than catching them in the wild. Catching insects can reduce insect populations dramatically when consumption increases. And there are no food safety standards for wild insects.

Together with the urban council in the town of Chinhoyi in Zimbabwe we built a model market structure where traders are selling their insects. Traders are selling some of the most popular edible insects; wild harvested mopane worms (Gonimbrasia belina), termites (Macrotermes natalensis) and wild harvested crickets. Farmers are still building stocks of farmed crickets, but the plan is to sell farmed crickets in the near future. It is still too early to see the impact but one notable improvement is hygiene. The market has also helped women traders, who are the main group selling insects there. They have become more organised about their business.

We hope this will lead to an increase in consumer willingness to buy edible insects, and demonstrate best practice to other regions of Zimbabwe and beyond. Through our project, we have also helped insect traders and farmers to form industry associations.

Why insects are valuable

Insects are highly nutritious and contain protein, fat and energy in proportions similar to grains, vegetables and seeds. They are rich in macro minerals like calcium, sodium and magnesium and micro minerals like zinc, manganese, iron and copper, all of which should be part of a healthy diet. In many parts of sub-Saharan Africa, these minerals come from fruits and vegetables, most of which are farmed seasonally. Edible insects could supply these minerals during seasons where there is less fruit and vegetable production.

They contain essential amino acids such as threonine, cysteine, valine, methionine and isoleucine. The recommended daily minimum intake of amino acids can be consumed by eating just 100 grams of the edible stink bug (Encosternum delegorguei), for example.

Earlier this year, parts of eastern and southern Africa were ravaged by Cyclone Idai. The cyclone destroyed crops and livestock, causing severe food shortages. We believe that in disaster-struck areas, edible insects can build resilience by being a food resource in recovery programmes and an alternative to traditional smallholder farming. There is an excellent example of that in the Democratic Republic of Congo, where orphanages have started insect farms to grow their own protein. The farms have helped decrease hunger and improve health among the orphans.

We were involved in setting up an international conference in Zimbabwe to discuss ways to foster the edible insects industry.

Research is required so that policy makers and those involved in the sector - farmers, processes, marketers and consumers - can make evidence-based decisions. This must happen across disciplines. Researchers should work with farmers and people in business to foster skills, innovation and enterprise. For example, they could develop business cases and scenarios.

Policy makers must understand that the sector is unique. Edible insects have not been categorised under any agricultural sub-sector such as crop or animal farming. On the African continent, they have not previously been farmed and treated as a commodity. That is why it would be helpful to establish and coordinate platforms such as meetings, workshops, exhibitions, magazines and websites.

Policy should also allow innovation and investment to happen at national, regional and international levels. Industry participants will need access to markets and credit.

Farmers, food and feed processors, traders and marketers must seize opportunities to invest and enter niche markets. They can also contribute to policy development and share knowledge about traditional ways of producing and eating insects.

There is momentum generated by several research and business initiatives that have been ignited in sub-Saharan Africa. And there is growing enthusiasm for using edible insects as alternative sources of protein and to build resilience against climatic shocks. It's an essential step towards improving food security in the region.

Robert Musundire, Associate Professor of Entomology in the Department of Crop Science and Post-Harvest Technology, Chinhoyi University of Technology