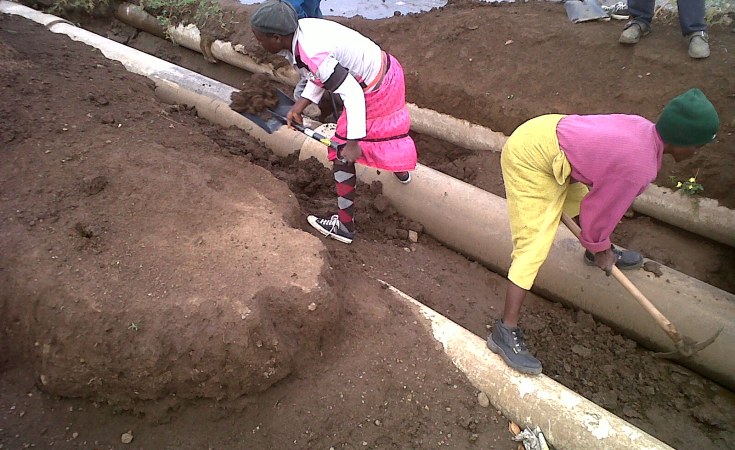 Chegutu, Zimbabwe — Millions of women take on the sort of hard, physical jobs once done by men as traditions break under the strain of a failing economy and working men go elsewhere

One of two women working alongside a dozen men, Mangari could barely cross the site, a scrap of land near Chegutu farming town in Zimbabwe's central Mashonaland West Province.

Accounting had never prepared her for this.

"I have no choice," she told the Thomson Reuters Foundation.

"I have looked everywhere for employment and have failed to find any befitting job. So I settled for this construction job after a short course as a brick layer at a local vocational training centre," said Mangari, a trained accountant.

She is one of millions of women taking on the sort of hard, physical jobs once done by men as traditions break under the strain of a failing economy and working men go elsewhere.

Building was the only way Mangari could weave a way through Zimbabwe's chaotic economy and eke out even a basic living.

A third of the nation's 300,000 construction workers are now women, said the Zimbabwe Building Contractors' Association.

Mangari's lone female colleague on the Chegutu site, 24-year old Thandi Sibalo, became a labourer two years ago when she felt death had left her with no better option.

"While I was in college, training to become a teacher, I lost my parents and my husband in a horrific road accident," she said. "My husband was responsible for my college fees so his death shattered my dream - and that's why I'm here."

"They (men) migrated in their millions to ... work as labourers on thriving farms in neighbouring countries like South Africa and Zambia," labour relations expert Denford Hwangwa, who works for the government, told the Thomson Reuters Foundation.

"Women left behind by their migrating husbands have had to fill up the gaps," he added.

Making ends meet is hard in a country where inflation hovers near 300 percent, according to the International Monetary Fund.

Food prices routinely jump, shortages are rife and opportunities few. Incessant power cuts have cost manufacturers more than $200 million in lost production since June, according to the Confederation of Zimbabwe Industries and Zimbabwe National Chamber of Commerce, darkening the bleak jobs picture.

GENIE OUT THE BOTTLE

The result is a new generation of working women, with no turning back to the strict, old gender lines, said Thembi Dhlela of Women of Zimbabwe Arise, a women rights organisation.

"We all have to generate money, men and women, through whatever jobs (are) available," Dhlela told Thomson Reuters Foundation. "As women, we are breaking those barriers."

Up to a point, said Catherine Mkwapati, a civil society activist.

"Women have dived into men's jobs, but back in their homes, the women still toil on their own, carrying out a litany of ... domestic chores," she said. "Yet men, even when they are available, rarely chip in with help."

Either way, women are now key to many sectors of the economy, filling roles once dominated by men.

The government's Hwangwa said "women have now taken up jobs on farms as operators of cultivators, some farm supervisors, some even drivers of tractors used on farms".

The International Labour Organization's statistics for September show that women make up 72% of the agricultural workforce, up from 66% in 2015.

Mining - once a lynchpin of the Zimbabwean economy given the country's rich mineral resources - is now open to women, too.

The U.S-based Pact Institute said women make up 10% of workers in the country's 535,000 artisanal and small-scale mining sector, mostly run by individuals or small groups of people rather than the giants who control most mines.

"In Zimbabwe, tough jobs once known to be men's jobs, are the ones easily available," Ratidzai Maungwe, an independent labour expert, told Thomson Reuters Foundation.

"Despite the tough economy, people are building homes, and shopping malls are being constructed and women have sought job opportunities in these areas," Maungwe said.

For Sibalo, college seems like another country given her current job. Plus, she must still perform all the traditional domestic chores that are routinely assigned to women.

"I hope one day I will have money to return to college," Sibalo said. "I wish to become a top educationist living a better life, teaching in South Africa, because teachers are poorly paid here."